IT pros, polish those resumes! Technology staffing firms and recruiters say hiring is finally growing at a steady pace again.

“IT is [becoming] stronger and stronger each month,” said Dave Willmer, executive director of IT staffing firm Robert Half Technology (RHI). Businesses are currently planning to staff up for new projects, including Windows 7 deployments.

In fact, RHI has witnessed healthier application-development hiring in the first half of the year, and now the firm is seeing more interest in infrastructure skills — just the type of hiring you’d expect in a business environment overdue for Windows 7 rollouts, Willmer said.

Before technology professionals tackle the reawakening job market, TheLadders suggests taking the time to look at what distinguishes a well-done IT resume from its generic brethren. Technology’s an animal unto itself. Its fast pace means musty resumes won’t pass muster. In addition, the project-based nature of most IT organizations means special handling of the document’s work-history section. IT workers have to portray both technical and functional skills. TheLadders checked in with IT staffing pros, and what follows is their advice on how to do an IT resume right. 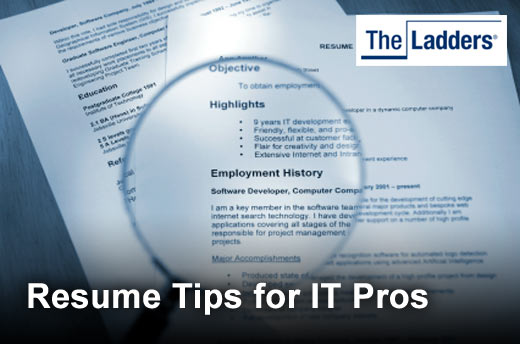 Click through for five resume tips for IT pros from TheLadders. Shana Westerman is a recruiter and resume expert at IT staffing firm Sapphire Technologies. She finds hiring managers with whom she works look for two things in an IT resume: specifics and consistent experience.

IT pros must spell out whatever skill set is specifically relevant to a given position. Even if some skills might seem self-evident, they still need to be listed, Westerman said.

“Even if skill sets are mundane for the role, people still want to know that [job candidates] are doing them,” she said, “and how far back [their experience] goes, as well as [their ability] to integrate technology components. That creates its own dynamic.”

Here’s an example: Basic job duties for a business analyst include meeting with users, gathering project requirements and documenting the requirements.

“A lot of people might think, ?Well, you’re a business analyst, of course you’re going to do that.’ But some companies might structure job duties differently, and some of those responsibilities might fall to another person,” Westerman said. “It’s important to highlight those skills. Just because you do it at Company A, you can’t assume somebody did it at Company B. Hiring managers aren’t going to assume that just because you have the job title there, you have the skill set they need.” Pour on the specifics, but don’t bury the most important items. You want to be specific and list every skill relevant to the job, not every skill you’ve ever exercised, and don’t date your resume with out-of-date skill sets, RHI’s Willmer said.

Be sure to highlight the most sought-after skills that are tough to find, he said, such as SharePoint development; ASP.NET; and C++ (not new, but still important). Then resist the temptation to list 13 others that everyone else has. “You’ve used Outlook and Word and pretty basic things. You don’t list them all,” he said. “One common mistake, especially with a very tenured person, is to list out everything you’ve done skill-wise. The most important is, what do you have that’s most current? Less is more, especially when it relates” to skills that are relevant to a targeted job. To deal with the project-based nature of IT work, Westerman typically tells job candidates to write a summary of the project in a paragraph form comprising five to six lines that detail:

Highlight one or another component depending on where the project intersects with a targeted job description. One focus might be whether the project came in under budget, if the team was rewarded for on-time delivery, or specifically what you were accountable for within the project. Alternatively, focus on the project being Web-based, internal, or external and rolled out to clients, if that’s how it will complement the targeted job, Westerman said. Technology professionals can represent a big investment for a hiring company, whether it’s project-based contract work or full-time, Willmer said. That makes it particularly important for a resume to demonstrate a candidate’s return on investment: the financial impact of his or her being on staff or on a project.

That means a resume should show not just, for example, C++ experience, but that use of the skill generated 200,000 additional hits in four months, with a bottom-line revenue increase of $4 million.

RHI is constantly working with candidates on how to spell out this kind of ROI. It’s not so easy. “From an IT perspective, your financial value, somebody doesn’t know that,” Willmer said. “Somebody doesn’t bump into you in the hall and say, ?Hey, nice work on that site, it generated $4 million for us.’ You might have to do some homework with supervisors and peers if it’s not shown to you. Anything relating to direct impact on [revenue or productivity] is very important.” With multiple projects per job and lots of skills to list, it shouldn’t come as a surprise that IT resumes tend to be longer than those of the typical job seeker. Westerman said that five to seven years of experience on a three to four page resume is typical, with more senior positions going a little longer.

Technical people’s resumes also run slightly longer than functional workers. You can trim some length if you write a brief summary of projects (three lines each), summarizing multiple projects and then providing a detailed, concise bulleted responsibility section of day-to-day tasks.