Since the launch of the iPhone, the mobile market has experienced widespread change and innovation at a dizzying pace. Consider companies such as Apple and Google, for example, which have made tremendous strides in providing both consumer and enterprise mobile users with a superior user experience, intuitive interface, sleek design and exceptional app offerings. That said, during this same period from 2008 to 2012, BlackBerry actually was losing its core base of enterprise users because its devices were not perceived to be as innovative or feature rich. Many believed that BlackBerry had failed to recognize a shift in the market and changes in consumer preference; that is, until now with the launch of BlackBerry 10 (BB 10).

With BB 10, BlackBerry has brought its features back to a place where they are on par with the rest of the market. With this release, no one can say that BlackBerry offers inferior products. Moreover, the new features and functionality of BB 10 are certainly geared toward the enterprise user, as BlackBerry knows that it lives on this market. BB 10 is a tremendous step in the right direction to satisfy the enterprise’s mobile wants and needs.

In this slideshow, Dipesh Mukerji, senior director of product strategy and marketing at Kony Solutions, takes a look at some of the top BB 10 enterprise security features that emphasize BlackBerry’s commitment to its 80 million users, most of whom are business users. Click through for more on BlackBerry 10’s top security features, as identified by Dipesh Mukerji, senior director of product strategy and marketing at Kony Solutions. 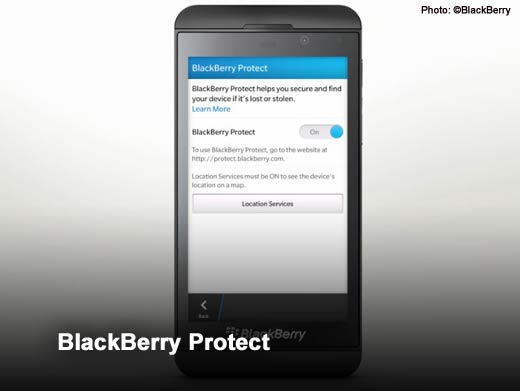 The BlackBerry Protect app comes as part of the BB 10 operation system and works in conjunction with the cloud to allow users to do a multitude of things to protect their devices. For example, users can completely wipe a lost device from the cloud and also back up device information remotely, enabling users to transfer all their information from a lost device onto a new BlackBerry replacement device. Users can also use their BlackBerry ID to make sure that no one who steals a device can disable BlackBerry Protect, ensuring that information is never lost. 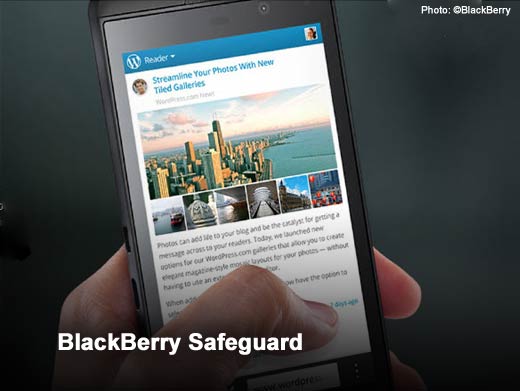 BlackBerry Safeguard effectively allows users to protect and secure all information on any app, including the device’s Web browser. This safeguard feature leverages app permissions by allowing users to set up private or public usage restrictions through the Privacy and Security menu available on most apps. This feature, however, is particularly relevant for the blazing fast new browser on the BB 10, allowing users to protect their data and browser cookie information. BlackBerry Balance enables BlackBerry devices to serve as both a personal and professional device through two separate profiles – one for work and one for play. This is significant because the information, data and apps between the two profiles can never be shared. For example, your personal email app, whether it is through Google or Yahoo, will not be accessible on the work profile. With all of the information on the work profile encrypted, BlackBerry Balance provides a way to manage both sides of your life without sacrificing security or privacy. Moreover, users no longer have to carry two devices, which is argument enough for IT administrators to throw BYOD out the door. With Malware Prevention, BlackBerry is trying to differentiate itself against open-source platforms such as Android, which can be susceptible to malware attacks. With BB 10, BlackBerry is now working to prevent malware attacks from third-party apps through a proprietary system integrated with Trend Micro and the company’s application reputation service. The integration between Trend Micro and BlackBerry will ensure applications submitted to the BlackBerry World App Store are analyzed and scanned for malware and removed or cleaned up before the app can even be downloaded. This provides one more aspect of security that will appeal to enterprise CIOs and IT administrators. Clearly BlackBerry wants to differentiate on security and is partnering with Trend Micro to make sure such issues don’t occur with third-party apps for BlackBerry. With BB10, BlackBerry has upped its game in encryption in order to fully protect mobile data. Now, BlackBerry is instilling 256-bit encryption keys for the data that lives both on the physical device and is sent over the air (OTA). BlackBerry is furthermore denying root access on the device, which will discourage hackers from getting administrative access to the device. Moreover, by randomly scrambling background code, hackers can’t find consistent functions or patterns on the device, thereby making it more difficult to break into a device.  All of these security measures have received a seal of approval from government organizations, as well as the FIPS 140-2 certification, thereby making BB 10 one of the few certified government devices.