No Love for IT this Valentine’s Day

According to Paul Henry, security and forensic analyst at Lumension, it’s going to be a rough Valentine’s Day for many IT admins this month. With ongoing issues with Java and 12 bulletins from Microsoft, including five critical issues and many restarts, it’s going to be a very disruptive Patch Tuesday.

It’s disturbing to note how many different Microsoft platforms are critically affected this month. Everything from Windows XP to the new Windows RT is critically impacted. It’s never a good sign when your current code base is impacted. There are also many more bulletins this month than we’ve seen in the last few months. Henry noted in December that 2012 brought more consistency and stability to Patch Tuesday than we saw in 2011. He hopes that this month is a one-time spike and not a return to the yo-yo pattern of 2011. Click through for a rundown of patches for February 2013, with commentary from Paul Henry, security and forensic analyst at Lumension. MS13-010 is a vector markup language remote code execution vulnerability, though it seems like an Internet Explorer bulletin at first glance. Vector markup language is always parsed by the browser, which is why it affects all versions of IE. Unfortunately, this also means there is no real way to reduce or mitigate the risk of this vulnerability, which consequently, makes it your highest priority patch for the month. 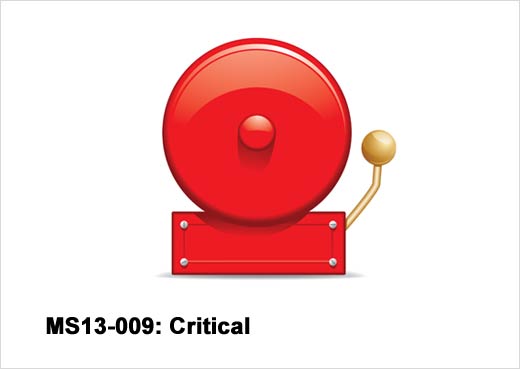 MS13-009 is a critical remote code execution issue and it addresses 13 CVEs. This is one of the larger numbers of IE CVEs that Microsoft has addressed in a single bulletin, although it’s by no means the biggest. While it looks tedious at first glance, it’s actually a fairly typical IE issue. In the spring, we tend to see higher IE patches as Microsoft cleans up the browser. Fortunately, none of these CVEs are under active attack. MS13-020 is an update in OLE (object linking and embedded) automation. The impact of this bulletin is limited, only affecting XP Service Pack 3. However, this should be a very high priority for XP users because it is a remote code execution issue. Risk is mitigated slightly because authentication is required for execution. The primary vector for attack through this vulnerability would be parsing RTF files in email through OLE automation. MS13-011 is a media decompression vulnerability that could allow for a remote code execution. Fortunately, this one doesn’t affect any of the newer platforms. It’s a standard media player Direct Show vulnerability. Worst-case scenario would be an end user browsing to a website with a codec that leverages the content the website is playing and uses Direct Show to render the content. MS13-012 is an Outside-In update for Exchange. There are essentially two of these updates this month: one for SharePoint, discussed later, and this one for Exchange.  This is a critical remote code execution issue and should be a high priority. MS13-015 is an elevation of privilege vulnerability in .NET. We’ve seen previous updates to .NET in which a lot was changed but this one doesn’t change much. This bulletin is critical, but is fortunately not under active attack. MS13-016 is a vulnerability in the kernel mode drivers. It’s significant because it addresses 30 CVEs but, before you panic, realize that it isn’t as bad as it looks. All the vulnerabilities addressed here are within a single component. However, different functions within that same component all have the same vulnerability. Microsoft could have chosen to mark this as a single CVE, but chose to present each individual change as a different CVE. This does affect all versions of Windows from XP to Windows 8. MS13-013 is an important update adjusting a remote code execution issue in Fast Search for SharePoint 2010. Microsoft has issued Fast Search updates in the past, and this one is more limited than previous ones. It only affects the advanced filter pack. This is the Outside-In issue referenced above. 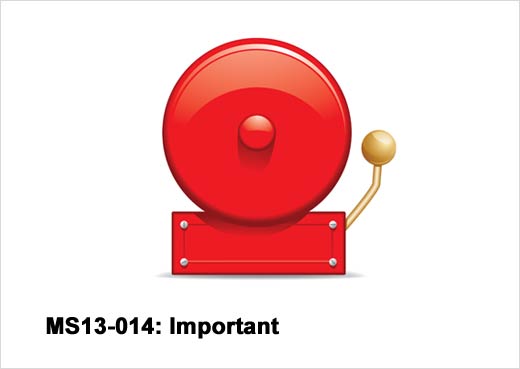 MS13-014 fixes a vulnerability in Microsoft Server that would allow denial of service. This issue affects the handling of file operations, such as file share. The network file system (NFS) role is not enabled by default, so the update is only offered to server systems that only have an NFS role enabled.

MS13-017 is a regular kernel update for an elevation of privilege issue with three CVEs. It affects all versions of Windows and is pretty similar to normal kernel updates. MS13-018 fixes a TCP vulnerability that could allow denial of service. It affects Vista through Server 2012. This is reminiscent of the half open connection SYN flood attacks we have had to deal with historically. Rather than using the SYN packet, now a FIN packet is used but the FIN handshake for connection tear down is not completed. Like the SYN flood, a FINWAIT attack could consume resources and cause a denial of service. MS13-019 is an elevation of privilege vulnerability in CSRSS, which is Windows Client/Server Runtime Subsystem. This is a single CVE affecting a limited number of Windows platforms. It has to do with how CSRSS handles objects and memory. Last week, Microsoft also issued an advisory and patch for Flash, as did Adobe, for a vulnerability that was being exploited in the wild. For Microsoft users, this is Flash on Windows 8. However, it’s all Flash products from Adobe. Henry recommends you install these Flash patches as soon as possible, since this is under active attack. The bigger news outside of Microsoft is the ongoing and never ending Java issues. Oracle has received some pretty consistent and negative attention for the problems with Java over the last few months. On Super Bowl weekend, they issued patches for over 50 CVEs. It has also been reported that we can expect yet more patches for Java from Oracle on February 19. Then, for the second time in the last month, Apple shut down Java accessibility for their users. This caused significant disruption to productivity for those using Java on their Apple machines, which Henry would guess to be a large portion of Apple users. A day or two of notice would have been smart, giving users time to find alternative arrangements for their Java-running applications.

This shutdown is a departure from previous Apple policy. In the past, Apple would include Java patches within their own patches and push it out to their users. Now, when problems occur, they abruptly blacklist Java, creating productivity disruptions for users. Fortunately, users can re-enable Java by going directly to the source. Applying the patch issued by Oracle will re-enable Java on Apple machines. Mozilla has also shut off auto-loading of plug-ins like Java for their Firefox users. While this is less disruptive than the Apple blacklisting technique, it would still be best for patches to be automatically applied through the application. Java isn’t necessarily an enterprise software concern. It’s primarily at the desktop level. For concerns on that level, automatic patching is definitely best.

Many organizations, including the Department of Homeland Security, have recommended that users disable Java completely. While this is certainly a good way to prevent issues on your machine, it may not be a realistic option for some people. Many applications run on Java and users will quickly become frustrated when these don’t work, and will re-enable Java as a result. It’s difficult to just walk away. So while we wait for a realistic option like HTML 5 to gain steam, remember to always apply the latest patches as they are available to ensure your machine is as secure as possible. If you have to install Java, install the latest version. When you install the newest version, Oracle will allow you to uninstall all previous versions, which ensures that you are only running the latest, most secure version of the software. It also offers a single check box to disable Java. Henry also wants to note the issue with Intel. Reminiscent of the infamous “Ping of Death,” a bug in an Intel Ethernet controller is vulnerable to the “Packet of Death.” If put to malicious use, the bug could crash network systems, even those protected by a firewall. A fix is currently in the works, but not yet available.