Microsoft Build 2015, which started officially today, is the beginning of the rollout of Windows 10, but it is far more than that; it is the first real showcase for CEO Satya Nadella’s Microsoft. I think this event, more than anything else, showcases why a technology firm needs to be led by someone who is both passionate and expert in the technology the company builds. Ironically, the event I remember most about Steve Ballmer was his “developers, developers, developers” chant years ago at a Microsoft sales event. Sadly, someone convinced him to lose that visible passion when he became CEO, and Microsoft bled those developers, partially as a result of that and the fact that he just wasn’t a developer.

Developers are critical to a company like Microsoft and at Build, this passion for them as a group and for product is back. In this way, the Microsoft of this decade is much more similar to Bill Gates’ Microsoft, but Nadella is an open source believer who has a passion for the cloud and services, making this Microsoft very different from the old Microsoft as well. Nadella’s opening words addressed this directly, as he recalled that Microsoft was a company built by developers for developers, looking back at Microsoft’s past, and then shifting to Microsoft’s present and future.

Let’s chat about that.

Microsoft’s core is to be a platform and tools company; its job is to empower developers. When it does that job well, it is massively successful because this is a unique focus not really shared by Apple, which focuses more on packaging beautiful consumer products, and Google, which either can’t seem to focus or focuses on mining personal information to generate advertising revenue.

Microsoft was created during a time when software and computing wasn’t available to many. Both this company and Apple were created to fix that problem and, initially, the two firms partnered to create that vision. But while Apple was passionate about hardware, Microsoft was passionate about tools and platforms. It moved on to work with IBM and then help create companies like Dell, Acer, Asus and Lenovo, among others, driving prices down and building computers for the masses, developing the economies of scale that define the market today.

But Microsoft, for a time, lost that focus, forgot who it was and put out products like Zune, which were anything but successful. While Microsoft didn’t fail, it lost its edge and advantage. I’m watching this keynote remotely via stream and this wide screen, glitch free, HD stream is in itself impressive against the more typical low-quality, square screen, glitch-filled experience that you often get from others.

Build this year is about returning Microsoft to what it once was.

Microsoft didn’t lead with Windows 10; it led with the concept of building the intelligent cloud. This is being positioned as the new core of the company, tied to Office 365 and Dynamics and based on Azure as a true hyperscale platform. Docker was showcased as the core customer advocate for the firm. Docker is a firm created to service developers, under the belief that developers were spending too much time messing with infrastructure and not enough time actually coding. It was created for Linux and these are huge open source believers and advocates. This is exactly the kind of company that would have avoided Ballmer’s Microsoft like the plague. It is a tad disconcerting to see them, as a result. But behind the scenes, open source at Microsoft has been embraced, moving from a dedicated advocacy group to an integrated aspect, spreading to every Microsoft platform and product.

This is a basic customer best practice. Regardless of what you initially may think of a practice, if your customers love it, you have to embrace it or face losing your customers and eventually losing the market. Microsoft initially rebelled against this movement. But a few years back, the folks in Microsoft, the rank and file, kind of rebelled and that rebellion was successful. This cloud effort is the strongest showcase of the result.

Product showcases in the keynote emphasized these core changes in the firm and how products are built using the new tools, with vastly improved dev ops and amazing dashboards creating a 360-degree view of the product under development with rapid identification of bugs and problems at a line of code level. Watching this, it almost made me want to go back and be a coder again. Almost. I sucked at coding, but it struck me that I’d have sucked a ton less if I’d had tools like this.

Oh, and the core Visual Studio Code offering (which apparently is free) runs on the Mac and Linux now, with full intelligence powered by open source tools. Boom, my brain just exploded.

Office 16 as a Platform

The old Microsoft passionately felt that Office should be more of a platform, rather than just a packaged product. At Build, it created a major push to return to that platform concept, as it advanced its cross-platform support from MacOS to iOS and Android. The most compelling was the showcase of apps like Salesforce, which could be integrated with Microsoft components to create a more comprehensive view of what is going on both inside and outside of companies. This was showcased in Office Graph, which was one of the biggest unsung changes to Office in years.

Last but not least, Windows 10 represents a new generation of Windows that will run on hardware platforms ranging from Raspberry Pi to Microsoft HoloLens. This is a fundamental sea change to how Windows is delivered, where it runs, and what the user experience is. One platform, one store, delivered more like a service than a typical operating system. I’ve been using the product for some time and it is amazing how it has advanced version to version and how much better it looks now than it did when I first loaded it.

The goal for this product is to have it on 1B devices in one year. It is kind of interesting that some of the best “features” actually are parts of earlier versions of Windows that got dropped in Windows 8, like fully scalable windows and Aero Glass. The core argument is that a developer can create one app that is easily ported to every Windows 10 product, including the Xbox. Microsoft has embraced and enabled legacy code on this platform aggressively and the developers loved this part. Of course, they also loved the HP Spectre laptops they all got as door prizes. 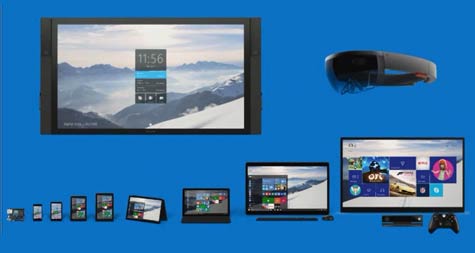 The biggest announcement was that Windows phones would have an Android subsystem so that they will run Android apps with little modification. Suddenly, developers can access more customers, and Windows Phone users, potentially, get a far richer application base.

For those who remember the old “embrace, extend, and extinguish” strategy that founded Microsoft and was subsequently forgotten, this would be considered the “embrace” phase.

I’ll drill into more of this later in the week along with HoloLens, which is likely the biggest announcement out of the show this week.

Wrapping Up: The New Old Microsoft

This is kind of like that wedding good luck charm, “something borrowed, something blue, something old, and something new.” This is the old Microsoft that loved and embraced developers, with the new one, focused on the cloud and amazing new platforms. It borrowed the core concept of being true to itself from IBM. The blue part, well, that is what it isn’t now that the passion is apparently back in Microsoft. While the change isn’t done, the cooperation between Microsoft units, the focus on developers, and embracing alternative platforms and open source concepts is a rich blend of the old and new Microsoft, which could become a far better partner. Hell, according to the firms in attendance, it has already become a far better partner.