4 Ways IT Can Better Align Itself to Fulfill Business Needs

At the NRF 2017 conference this week, Intel demonstrated how serious it is about changing processes across the retail sector by unveiling a standard platform for deploying retail applications and demonstrating how a robot can be employed to stock products on shelves that are always priced correctly.

Ryan Parker, a marketing director for Intel, says the Intel Responsive Retail Platform (RRP) is an effort by Intel to create what amounts to a reference architecture for Internet of Things (IoT) applications in the retail sector. It includes the hardware, software, application programming interfaces (APIs), RFID tag technology and sensors required, says Parker.

The goal, says Parker, is to give retailers more control over inventory management. 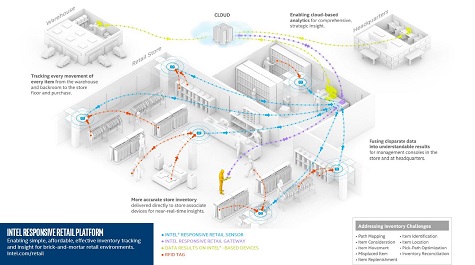 Parker says Intel envisions a world where retailers take advantage of the IoT to more efficiently manage inventory by knowing the precise location of each item in the supply chain at any given moment. As part of that effort, Intel at the NRF conference this week demonstrated Tally, a robot developed by Simbe Robotics, that can be used to more efficiently manage inventory inside a retail store. To help achieve its goal, Intel this week also pledged to invest over $100 million over the next five years in technologies aimed at the retail sector.

Intel RRP is a component of a larger series of IoT initiatives that Intel is investing in as part of an effort to expand the number of use cases for its processors. Naturally, it remains to be seen just how much of the retail supply chain can be automated. But one thing that is for certain is that robots are about to play a bigger role, not just in the warehouse, but on the shop floor.