The 2016 presidential election ushered in new era. As Grant Shirk, senior director of Product Marketing at Vera, pointed out, it was our first true cyber election. Not only did much of it play out in social media, particularly on Twitter and Facebook, but the election brought attention to how stolen data can be used to manipulate opinions, and it may have presented us with the our first taste of cyber espionage.

“As we enter 2017,” says ThetaRay CEO Mark Gazit, “we will see more and more occasions where cybersecurity is not about computer geeks and IT departments, but about threats to financial institutions and critical infrastructure, including very well-protected mail servers. History has taught us that the warfare arena, including espionage and intelligence gathering, follows technological progress — and in some cases leads the progress. As such, we will almost certainly see new and more advanced technological solutions being used by governments to conduct cyber warfare, even before they fall into the hands of civilian cyber criminals.”

Here are expert predictions about how cybersecurity will affect and involve our government, policies and politics in 2017. 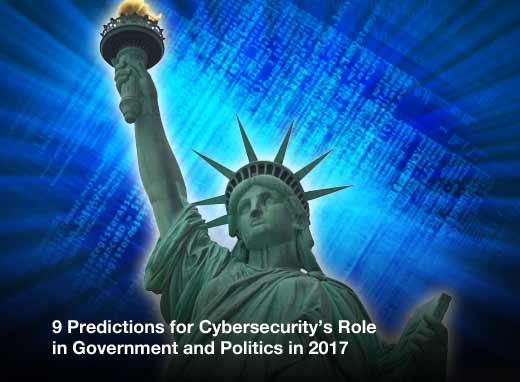 Cybersecurity’s Role in Government and Politics

Click through for expert predictions about how cybersecurity will affect and involve our government, policies and politics in 2017. 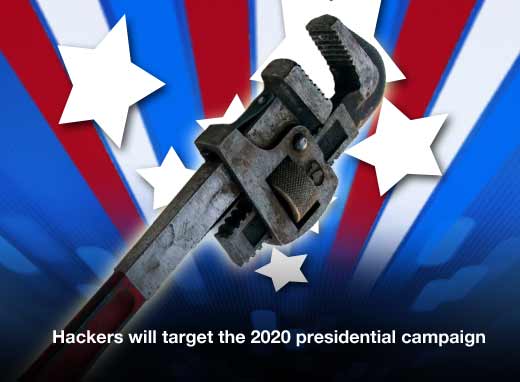 Hackers will target the 2020 presidential campaign

You know the 2020 campaign will begin the day after the inauguration. That’s why Oren Falkowitz, an ex-NSA analyst and ex-government-sponsored hacker, and the current CEO and co-founder of Area 1 Security, predicts that in 2017, attackers will be working on their attack plans for the next presidential election. “It takes many years to plan and execute an effective hack, especially if they’re aiming for a big target like presidential elections,” says Falkowitz. “Malicious actors have a keen interest in the political process (as we’ve witnessed with the national election this year). Leaders will be too late to stop the attacks in 2019 or 2020; they need to set up their defenses now.” “I believe the United States will enter a more protectionist stance and this will drive additional investment in isolation security,” says Phil Richards, CSO of LANDESK. “This move may make it increasingly difficult to operate IT-oriented business globally.” President Trump will set the precedent for responding to cyberattacks

The last half of 2016 saw an increase in tension between the U.S. and various nation-states and non-state actors over how the administration should respond to cyberattacks, according to Tony Gauda, CEO of ThinAir. “So far, President Obama’s responses to data breaches and DDoS attacks have remained hidden from the public, but President-Elect Trump will be responsible for crafting the appropriate responses (and escalations) to any future incidents, Gauda says. He believes that Trump’s hawkish tendencies toward foreign and military policies will likely influence a hardline approach to cybersecurity policy. 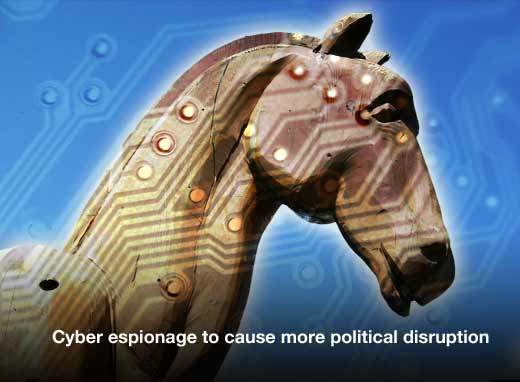 Expect to see nation-states and their sponsored operatives using cyber espionage more and more to cause political shifts and disruption, and to gain economic advantage, Peter Bauer, CEO of Mimecast, predicts. This will involve, but will not be limited to, email hacking and disclosure of other forms of intercepted private communications, and disruption of and interference with critical national infrastructures, he adds. This could include a new generation of Stuxnet. Cybersecurity isn’t always about malware or infiltrating the network. Absolute’s Global Security Strategist, Richard Henderson, thinks that with all the attention being put on securing backend infrastructure, groups will forget to educate and secure the endpoint devices being used by the politicians themselves. “A stolen laptop without full disk encryption or asset tracking software can very easily be broken into and ransacked. Why hack the hardened email server when you can just get the emails from the user directly?” Henderson asks. “Expect to see at least one embarrassing incident where leaked emails that came directly from a stolen device are sent to the press.” Government and regulators won’t do it for you

“In 2017, the number of data breaches will grow along with the volume of compromised records, becoming far more expensive for organizations of all sizes,” Information Security Forum’s Steve Durbin says. “Costs will come from traditional areas such as network clean-up and customer notification as well as newer areas such as litigation involving a growing number of parties.” Durbin expects that a result of the increase in data breaches and the related expense will be public opinion pressuring governments around the world to introduce tighter data protection legislation, which in turn will bring new and unforeseen costs. Also, international regulations will create new compliance headaches for organizations while doing little to deter attackers. The recent election cycle put a strong emphasis on “America First,” and at least one expert thinks that opinion will spill over into cybersecurity efforts. “There is significant risk that the United States may withdraw from international policy engagement that has become the norm in cybersecurity,” says Maarten Van Horenbeeck, director of Security Engineering at Fastly. It will be the wrong tack to take, he adds. “Cybersecurity is not purely a domestic issue for any country, including the United States. We learn from successful sensor networks set up in Asia (Tsubame), develop ideas for measuring cyber security improvement based on those in Japan (Cyber Green), and incorporate information-sharing tools that rose to popularity in Luxembourg.” There was a lot of talk about hacking during the elections but the reality is that a proxy cyberwar has been going on for some time between various nations and it’s only going to accelerate in 2017, Mandeep Khera, CMO of Arxan, points out. “We expect major attacks occurring at the government infrastructure as well as commercial companies at the IoT level, causing serious damage.”