For the better part of two decades now, Tableau and Qlik have fought fiercely for dominance over data visualization. Both companies recognized early on that the analytics tools being provided within ERP applications left much to be desired, especially for departments in lines of business that did not want to have to wait for IT professionals to generate a report every time they wanted to query data.

Tableau arguably won the first round of the contest to deliver self-service applications at the departmental level. Now both companies have set their sights on enterprise-class deployments by increasing the volume of data they can analyze. Qlik, for example, re-engineered its entire platform to create Qlik Sense, which supersedes its first Qlik View offering, to deliver an analytics application based on a modern microservices architecture that not only can process more data, it’s more extensible than ever.

Tableau, meanwhile, has focused on expanding the amount of data it can process by adding a Hyper Data Engine.

Both companies are also investing in artificial intelligence (AI) and speech recognition to make their offerings more accessible.

It remains to be seen who will win this contest. However, the one thing that is clear is that end users are benefiting from a substantial amount of innovation that without that fierce competition might not have comes about nearly as quickly.

What are the Similarities & Differences between Qlik Sense and Tableau?

No organization is going to suffer a major disadvantage because they decided to pick one data visualization platform over another. The two vendors are clearly engaged in a game of leap frog in terms of capabilities.

Tableau, for example, enjoys a slight edge in terms of the variety of pre-packaged visualizations it provides and accessibility via mobile computing devices. Qlik Sense, right now, can process more data in more ways. Most recently, the June update to Qlik Sense has also made it much more cost effective to deploy the company’s software across a multi-cloud computing environment.

At this point, however, it’s hard to say that any of these capabilities amount to a sustainable competitive advantage. 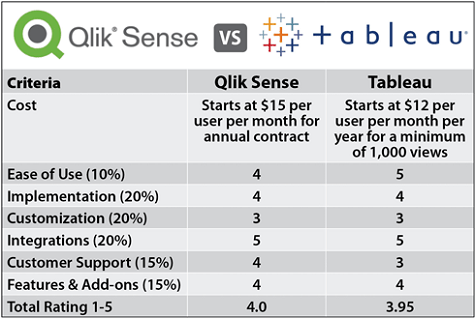 Both Tableau and Qlik provide perpetual licenses for software deployed on-premises or in a public cloud that are based on the types of end users accessing their applications. Qlik, however, makes use of user token rather than a named user approach to licensing. Qlik also just announced that it will make its software available to be deployed on any public cloud under a single license.

Qlik Sense as a SaaS application can be accessed for $15 per user per month for an annual contract. There’s also a free basic edition that allows users to create visualizations that can be shared with up to five users.

The SaaS option for Tableau starts at $12 per user per month on an annual basis for a single user. But there are several additional modules that most enterprise organizations are going to need to license.

Data visualization is a core capability for both offerings in the sense that, without it, neither offering would exist. Not surprisingly, both companies have invested heavily in trying to provide the optimal user experience.

Tableau makes it simple to drill down into data without having to, for example, manually create calculations, design visualizations and format dashboards. Tableau also doesn’t require uses to toggle between modes to design and view modes. Tableau is also investing in natural language capabilities specifically designed for BI use cases. Overall, Tableau is accessible to almost any class of end user.

But in terms of creating sophisticated workflows using multiple data sources, Qlik Sense is the more powerful tool that leverages an Associate Engine developed by Qlik that makes it easier to combine data from multiple sources. Qlik Sense leverages artificial intelligence and conversational analytics to make those capabilities more accessible, which is an area that Tableau is now also investing in more aggressively. Both Tableau and Qlik Sense can be deployed on-premises or on a public cloud. Both offerings can also be accessed as software-as-a-service (SaaS) applications. Qlik Sense, however, is the latter of the two platforms, which makes it deployable as a set of cloud-native microservices that can be installed, for example, on Kubernetes clusters that can be deployed on multiple clouds.

Tableau, however, has focused a little more on automating the data prep process, which makes it simpler to get started.

Customizing either Qlik Sense or Tableau can require a significant amount of expertise, depending on the complexity of the task.

Both Tableau and Qlik offer free support via website, knowledge bases and large online communities. Both companies require companies to pay extra for support from them, and only Qlik provides support over the phone.

As noted earlier, both Tableau and Qlik are essentially leap frogging each other with every other release of their software in terms of core features. In terms of add-ons, Tableau is beta testing an Extension Gallery that makes it simpler to discover third-party add-on tools.

The decision to go with Tableau over Qlik Sense will most often come down to individual end-user biases. Tableau makes it simpler to navigate a data set, but Qlik Sense is a little more of an enterprise-class application in terms of the amount of data that can be processed via the company’s Associative Engine and the workflow tools built into the platform. Tableau, however, is making it clear that it intends to close that gap via its own Hyper Data Engine.

Organizations that have a real need to deploy an analytics module across multiple clouds, however, should pay close attention to how Qlik is going about reducing application licensing costs.

The one caveat organizations need to consider carefully is the total cost of ownership of their analytics platform. Not only are there a lot of modules that need to be evaluated in terms of how many users may need access to them, but it’s not too hard for an organization to find itself paying more in SaaS fees than it might for a perpetual license for an instance running on a public cloud or on-premises server.

It’s also worth noting that Qlik was taken private in 2017 after being acquired by a venture capital firm, while Tableau saw a 15 percent gain to bring its revenue for the quarter to $282.5 million, while posting a GAAP operating loss of $93.2 million, which compares to a loss of $50.4 million in the same period a year ago. Qlik continues to operate as a independent company, while Tableau is scheduled to become an independent unit of Salesforce later this year