Spotfire was one of the early pioneers of data visualization that TIBCO Software acquired way back in 2007. As such, TIBCO Spotfire continues to enjoy a loyal base of users of a data visualization tool, especially in vertical industry segments such as health care. At about that same time, however, Tableau Software was starting to hit its stride and eventually came to be viewed as the dominant leader of the category.

Rather than concede the battle altogether, however, TIBCO Software last year launched TIBCO Spotfire X as part of an effort to regain lost ground. That release not only added capabilities such as support for streaming data that were already available in Tableau, it also enabled TIBCO Software to deliver a significantly faster version of its software that includes natural language capabilities and some artificial intelligence (AI) capabilities. In addition, TIBCO Software earlier this year further signaled its willingness to invest in this area by acquiring SnappyData, a provider of a data fabric specifically optimized to integrate various types of data.

Tableau, of course, has hardly been sitting still. Recently, Tableau recently replaced its in-memory engine to improve its ability to process large amounts of data. Similarly, Tableau has been investing in natural language capabilities along with starting to add AI functions designed to augment the analyst user experience. Tableau also recently updated its core engine to add support for a vector engine that improves its ability to process geospatial data.

Both Tableau and TIBCO Spotfire can be deployed on-premises or in a cloud environment managed by either company. TIBCO Software, however, does offer an instance of its software on a pure consumption model via Amazon Web Services (AWS).

There’s no doubt that Tableau retains all the benefits of being the market leader in this category. But the latest release of TIBCO Spotfire made it clear that TIBCO Software has recommitted itself to a category it played a key role in establishing in the first place.

This battle may ultimately turn on which vendor best provides AI capabilities that augment the analytics expertise of the end users. Right now, those capabilities are still relatively nascent. The one thing that is clear is that in the months and years ahead, the way analytics applications are accessed and employed is about to change utterly, so organizations should carefully watch how Tableau and TIBCO Software both go about trying to realize that promise.

What are the Similarities & Differences between TIBCO Spotfire and Tableau?

At the core of Tableau is a patented VizQL engine invoked via a graphical user interface (GUI) that Tableau continues to extend with support for new data types and dashboards with every release. As a result, Tableau has gained a large loyal following among analysts who value, for example, the ability to leverage a drag-and-drop visual interface to easily render charts and drop them into other applications such as Microsoft Office 365 or Salesforce customer relationship management (CRM) software. Tableau also provides a wide variety of pre-packaged visualizations that reduces the amount of effort that analysts need to make when trying to identify what type of chart lends itself best to a specific data set.

The one thing that makes the two offerings noticeably different can largely be attributed to the roots TIBCO Spotfire has in business intelligence. TIBCO Spotfire is a little more accessible to the average end user that is not necessarily trained in the arts and sciences of analytics. TIBCO Spotfire is also credited with being able to better process statistical data. TIBCO Software then also makes it a little easier on the average end user to identify trends and patterns in data without having to call in an expert to affirm what they think the application is showing them. TIBCO Software also claims that it will always have better performance running analytics developed using the popular open source R programming language because its core libraries are based on the same language.

In general, TIBCO Software is betting that as usage of analytics becomes more pervasive, more organizations will be looking for tools that are accessible to a broader base of end users. 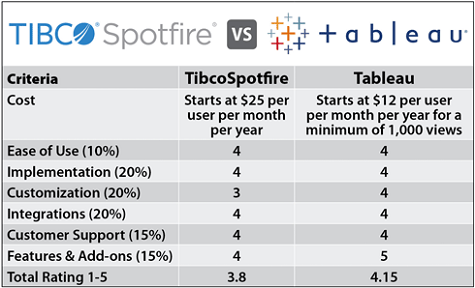 The SaaS option for Tableau starts at $12 per user, per month, on an annual basis for a single user to view data. There are, however, several additional modules to address, for example, mobile computing requirements or the prepping of data, that most enterprise organizations are going to need to license for some users.

Because the pricing plans are so different, organizations would be well advised to carefully consider their total costs per user once all the elements of the analytics application they require are determined. However, it appears that TIBCO Spotfire is priced with more of an enterprise deployment in mind versus Tableau, which appears to be working its licensing model up from an individual user. Depending on the number of analysts and viewers that need to access the application, the more entry-level offerings from Tableau should prove to be less expensive.

Tableau makes it simple to drill down into data without having to, for example, manually create calculations, design visualizations, and format dashboards. Tableau is also investing in Ask Data natural language capabilities specifically designed for BI use cases. Overall, Tableau is accessible to almost any class of end user in one form or another, but the visualizations that can be created with Tableau tend to be more sophisticated than what can currently be generated using TIBCO Spotfire.

TIBCO Spotfire, however, is arguably a little more accessible to the average business end user. Much work in the latest release of TIBCO Spotfire has also been done to add natural language via partnerships with other vendors and native AI capabilities within the context of what TIBCO Software bills as an A(X) Experience. In addition, TIBCO Software has made considerable improvements to the workflow processes aimed at teams of users in the most recent release of TIBCO Spotfire X. Both TIBCO Software and Tableau provide options through which their respective applications can be set up in short order. TIBCO Software might have a slight edge for organizations that for some reason find themselves needing to download an instance of a data visualization application for which they can be billed at 99 cents per hour. Conversely, Tableau offers Tableau Public, a free service that an end user can employ to visualize, for example, a single instance of a Microsoft Excel spreadsheet.

Tableau provides tools that enable experts to customize reports and dashboards. TIBCO Spotfire has fewer customization options, but it does make it possible for organizations to “white label” analytics with other applications without necessarily having to reveal that the source of that capability is being provided by TIBCO Spotfire.

Both TIBCO Spotfire and Tableau provide connectors that can be immediately deployed to access a wide variety of data sources. Tableau, however, includes about 65 connectors versus roughly 25 for TIBCO Software.

TIBCO Spotfire provides access to a TIBCO Support Central portal as part of its license. There is also a Spotfire Community forum and TIBCO offers discounted training packages in the form of Educational Passports.

In terms of data visualization capabilities, both platforms provide a wide variety of options. Tableau provides access to a deeper set of visualizations and associated “story telling” tools. Tableau is also beta testing an Extension Gallery that makes it simpler to discover third-party add-on tools. Given its installed base, Tableau right now has attracted a larger pool of third-party developers to its platform.

Much of the decision to go with Tableau versus TIBCO Spotfire will be heavily influenced by the requirements of the end-user population any organization is trying to serve. Organizations that have a lot of sophisticated analysts should probably lean toward Tableau. It should be noted that Tableau is a little further down the path toward delivering both embedded augmented data preparation and data visualization capabilities. Organizations that are trying to augment a more traditional BI application experience with advanced analytics may find TIBCO Spotfire to be the more compelling option.

Tableau continues to gain momentum. The company saw a 15 percent gain to bring its revenue for the quarter to $282.5 million, while posting a GAAP operating loss of $93.2 million, which compares to a loss of $50.4 million in the same period a year ago. Despite those losses, however, organizations should also factor the number of analysts that might already know how to take full advantage of Tableau into their decision making.

TIBCO Software is a private company that doesn’t break out TIBCO Spotfire sales. The company, however, has made it clear that it views analytics as a core capability of a larger Connected Intelligence Cloud initiative that drives TIBCO Software’s research and development strategy.

Enterprise IT organizations that have standardized on various middleware platforms from TIBCO Software to achieve that goal are likely to view TIBCO Spotfire as a natural extension of that strategy. As such, TIBCO Software is likely to be a little more flexible on pricing for customers that have committed to its overall portfolio. TIBCO Software, however, does need to consider how much in the way of research and development resources to apply to TIBCO Spotfire versus the rest of its portfolio.

Regardless of the path chosen, however, it’s clear that TIBCO Software is starting to close many of the historic gaps that have existed between Tableau and TIBCO Spotfire.