Despite the billions of dollars invested over the years in data storage, the systems that manage it are relatively dumb. Qumulo wants to change that starting today with the delivery of Qumulo Core, a file system for network-attached storage (NAS) systems that takes advantage of real-time analytics to provide visibility into where trillions of files are stored at any given moment. Qumulo has raised $67 million in total funding to further develop and promote its new software.

Qumulo CEO Peter Godman says Qumulo Core is based on a scalable block storage architecture that exposes a public RESTful application programming interface (API) through which management software imbued with analytics can be applied to access a database of metadata about the information stored in the Qumulo Scalable File System (QSFS). Qumulo also exposes an API Explorer via a Web user interface to make it simpler for IT organizations to query the system to determine where to store files based on how often they are accessed and the criticality of the data stored inside them.

Created by the same team of engineers that developed the Isilion NAS file system that EMC acquired in 2010, Godman says that Qumulo Core was written to enable organizations to simply manage data at scale. The current rendition of Qumulo Core comes on an industry standard x86 appliance, but Godman concedes that it’s not too hard to envision how Qumulo Core might also be exposed as a cloud computing service. 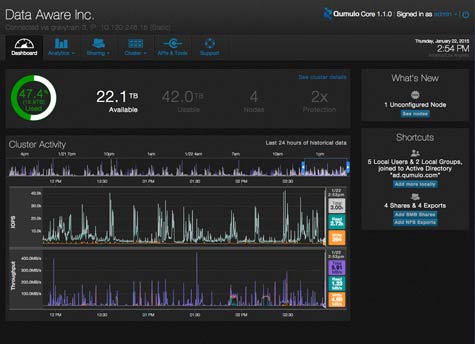 The Qumulo Q0626 hybrid storage appliance itself is a 1U node that provides 24TB of raw hard disk drive capacity and 1.6TB of raw solid-state drive capacity. The NAS systems can scale from four to more than 1,000 nodes in a single cluster and single namespace. The appliances themselves run an implementation of Linux, which in turn hosts Qumulo Core as an application.

Pricing for Qumulo Core is based on a software-as-a-service model that enables IT organizations to continuously take advantage of upgrades to Qumulo Core. Entry level pricing for a four node 100TB cluster is $50,000.

The convergence of analytics, APIs and metadata is creating something of a primordial soup that with the right catalyst should soon transform how data is managed across the enterprise. It’s still a little early in the process, but the days when storage was managed as a set of isolated individual boxes of data is about to give way to a new era where the relationships between different sets are much more easily discoverable.