The End of the Beginning of Virtualization

While there is a significant amount of adoption of virtualization technologies throughout the enterprise, most of the IT processes in place to manage it are still manual.

A new survey of 204 IT professionals conducted by Zenoss, a provider of open source systems management tools, finds that IT organizations are looking for the silver bullet when it comes to IT management. Rather than adopting new tools to specifically manage virtual machines, they are looking for tools that will allow them to manage both virtual and physical IT infrastructure under a common management framework.

As time evolves, Mark Hinkle, Zenoss vice president of community, says he expects to see a lot more diversity in the virtualization and cloud computing landscape. Clearly, VMware dominates the scene, while both Amazon and Google lead the charge when it comes to cloud computing.

But Hinkle says the interest in Microsoft virtualization technologies remains high, and that both Xen and Red Hat KVM are gaining ground.

On the cloud computing front, Hinkle says Microsoft has assumed the role of “big outlier” and that we should expect to hear much more about the company’s overall cloud computing strategy as it continues to unfold. And, says Hinkle, traditional hosting companies such as Rackspace should not be counted out. Amazon and Google may have delivered a wake-up call to the entire hosting industry, but these companies are now rapidly moving to respond.

In essence, what we’re really witnessing is the end of the beginning of virtualization and cloud computing adoption in the enterprise. As we enter the next phase, there will be more pressure to deliver both IT agility and true cost savings than ever, which in most cases, Hinkle said, will require increased reliance on IT automation.

In the meantime, which specific management frameworks will ultimately be used to automate many of the IT processes surrounding virtualization and cloud computing appears to be anybody’s guess. Click through for results from aZenoss survey on virtualization and cloud computing usage. IT organizations have been consolidating data centers rapidly. Well over half have embraced virtualization. VMware leads by a wide margin. But reducing IT costs is still top of mind. 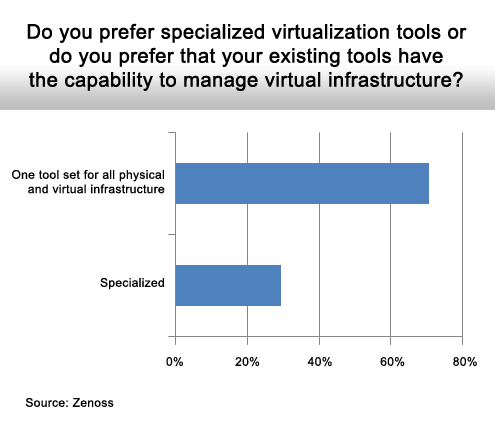 One tool to manage them all. 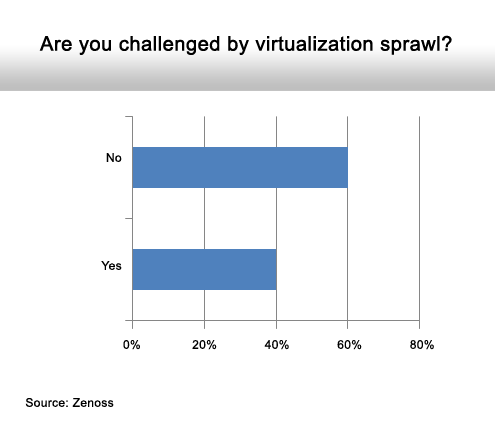 Virtualization sprawl is starting to become a bigger problem. A lot of manual intervention is still required. 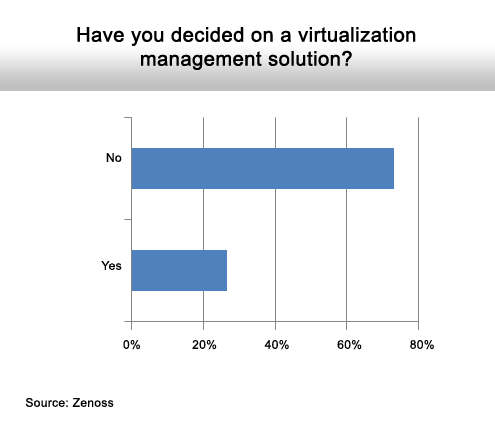 Anybody’s ball game at this point. Google and Microsoft are gaining ground on Amazon. Too many are without any tools at all.