New research from QuinStreet Enterprise sheds light on why investments are being made in data centers, and what the investments focus on, as well as which technologies might not be receiving as much investment in the coming year.

Why Modernize the Data Center

The survey found that 88 percent of enterprises report that they are investing in their data centers, which are seen as having the potential to add value to the business. Twenty-seven percent recently made upgrades to address additional capabilities needed in supporting business transactions, content serving and data analytics. The rest – 61 percent – are looking to modernize their data centers. The modernization efforts don’t occur in a vacuum, however. As the report summary explains:

Key benefits of data center modernization are enhanced security (74 percent), improved uptime/availability (73 percent), and improved IT resource usage (67 percent). The highest rated benefit related to cost is better IT staff efficiency, at 65 percent, but enterprises did not rank cost savings as one of the highest benefits, which vendors should note. 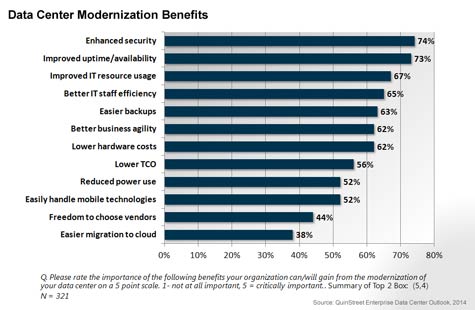 When it comes to the biggest challenges to data center modernization, security and compliance top the list. While they are also key benefits, 58 percent of respondents ranked them as the largest challenge, followed by inadequate budgets, slow backup recovery, lack of visibility to resource usage, and power and cooling costs. 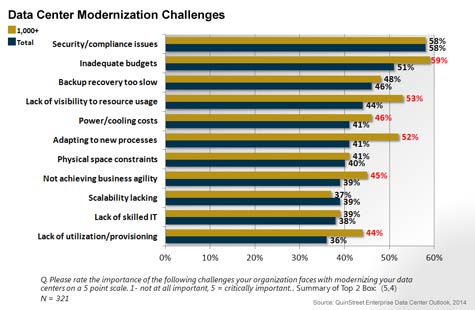 With Which Technologies Will the Modernization Be Accomplished?

Survey respondents were asked about eight technologies: server virtualization, storage virtualization, energy-efficient hardware, converged infrastructure, cloud delivery model, Big Data analytics, SDN and flash-accelerated servers. Virtualization, one of the most mature technologies examined, is seen to present the same benefits and challenges by respondents: Security and improved IT resource usage are major benefits, while security/compliance and budgets, as well as lack of visibility into resource usage, are chief concerns.

And, finally, another highly scrutinized technology area and strategy, Big Data analytics, is still ramping up: The survey was conducted online by QuinStreet Enterprise Research using an email invitation sent to IT professionals and executives in the QuinStreet Enterprise database. All respondents were involved in the IT purchasing process for data center hardware, software and networking products. The survey was completed by 321 qualified professionals in July and August, with a margin of error of +/- 5.7%.