Modular Infrastructure and the Cloud

Enterprises contemplating the deployment of private clouds are confronted with a key choice right out of the gate: Do you build on top of legacy architectures or start from scratch with greenfield infrastructure?

To many, the simple answer is to work with what you have. Building a data center from the ground up may offer a state-of-the-art solution, but it is simply not in the budget.

However, the financial equation is changing rapidly with the development of modular or converged infrastructure solutions, many of which are geared toward providing in-house cloud functionality for either private or hybrid operations.

According to HP’s Terence Ngai, modular infrastructure built on open platforms allows the enterprise to ramp up cloud infrastructure quickly without the limitations of a single-vendor solution. This not only provides a fast on-ramp to cloud application development, but allows organizations to take advantage of the increasingly diverse systems and offerings that are arising around solutions like OpenStack. If you are looking to maximize the return on your cloud investment, modular infrastructure is the quickest way to start reaping top cloud benefits like dynamic provisioning and streamlined infrastructure and operations.

Also recognize that while cloud operations may not be the best fit for legacy infrastructure, converged systems can be optimized for both the cloud and legacy applications, says tech author John Breeden. This is particularly true when it comes to scalability and the demands of Big Data. CI can be ramped up with relative ease compared to complex, silo-based legacy plants, and then easily decommissioned if data loads subside. And with a fully functioning cloud in-house, organizations will find it easier to manage hybrid environments by keeping sensitive data behind the firewall while migrating low-level functions to public resources.

This is likely one of the prime reasons why modular systems are starting to eat into sales of legacy rack and blade systems. As IDC’s Jed Scaramella told Enterprise Tech, “density optimized” solutions are expanding beyond the hyperscale user set, such as Google and Facebook, and are moving into traditional enterprise settings in support of cloud operations and virtual desktop solutions. Sales of these machines are growing at more than 50 percent per year even as the price per unit is rising. And with advanced processors starting to target the modular space, there is every reason to believe the trend will continue. 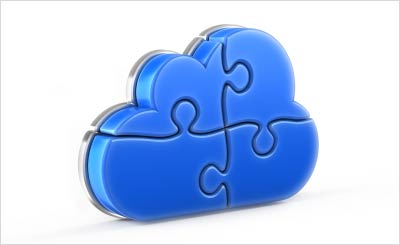 With this kind of growth, it’s no wonder that leading manufacturers of legacy systems are quickly ramping up their modular offerings. Cisco just took the wraps off the new M-Series server for the Unified Computing System (UCS) portfolio. The device integrates Intel’s Xeon E3-1200 v3 processors with up to 64 GB of main memory and more than 6 TB of storage, depending on what type of SSD you use – all tied together via the PCIe 3.0 interface and dual 40 Gbps Ethernet connectivity. The company claims that the five-year-old UCS platform has already amassed more than 36,000 customers, including three-quarters of the Fortune 500 set.

One of the chief benefits of the cloud, and virtual infrastructure in general, is that it allows the enterprise to future-proof its data environment. That is, upgrades and expansions are easier to implement in logic than in hardware.

But this advantage is blunted if the data environment is sitting on aging infrastructure. Building a cloud on modular, greenfield infrastructure may be difficult, but it puts the enterprise on a stronger footing when it comes to meeting rapidly expanding data requirements.

In short, a little pain in the pocketbook now will avoid a host of problems later.