Consultants need to do a little bit of everything, and that can mean loading up on a lot of potentially expensive software packages. Thank goodness for open source freeware projects and proprietary software publishers who give away powerful free samples as a marketing tactic.

These software packages provide more than adequate – sometimes surprisingly powerful – functionality for your Windows-based PC, and interoperate quite nicely with brand-name apps. They won't necessarily replace industry-standard tools for your core business; professional project managers are still going to have to bite that $500 bullet for a seat of MS Project.

But for general productivity and most niche tasks, software doesn't have to cost a lot, or anything, for that matter. These tools don't expire and won't frustrate you by suppressing necessary functionality. They just work.

This slideshow features 10 free client software packages identified by Ken-Hardin, an independent business analyst and management consultant, as well as an IT Business Edge alumnus. 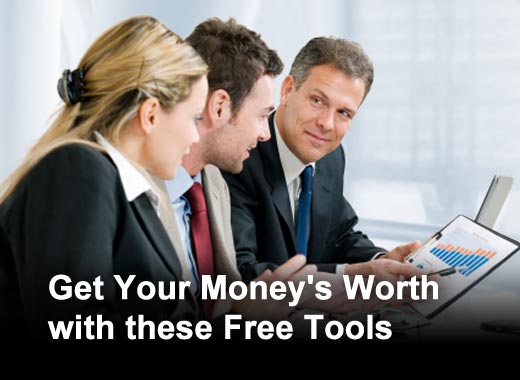 Click through for 10 free applications to help you manage your time and tackle niche project management tasks. 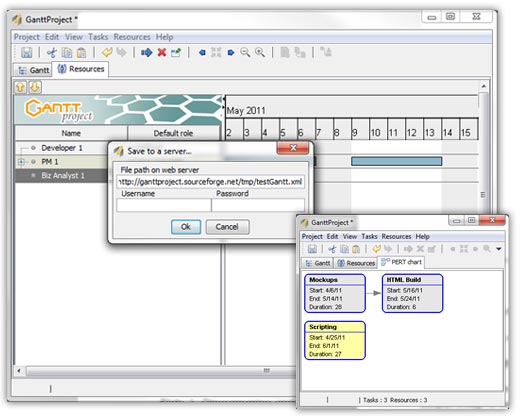 There are a ton of free spreadsheet-based Gantt chart tools out there, but for Ken’s money, if the project is complex enough to merit a Gantt chart to begin with, he wants the data to be in a database, not a spreadsheet. The best free tool he has found for this joyous task is GanttProject, a GPL 2.0 freeware project. You can import resources from standard contacts, assign hard dependencies between tasks, and toggle views between Gantt and the friendlier PERT model. You can post the project to a Web server account, and most importantly, you can export to the MS Project format or CSV. A handy set of tutorials at the project's Web page can walk new users through the basics of Gantting out a project. The Dia diagram editor (current version, 0.97.1) is a GPL, v2 software package that is, as you'd expect, very similar to Microsoft's standard Visio tool set. Dia supports layering, some advanced drawing methods such as Beziergon point manipulation, and AntiAliasing when you really want your output to shine. More importantly, it includes a menu of more than 30 conventional icon sets (you can see the Cisco and Network menus above) and exports to a wide range of open and proprietary formats, including Visio XML and the LaTeX doc preparation system. Recommending software from the Mozilla foundation is not exactly a bold move, but with the addition of the Lightning calendaring add-on (now in beta 1.0), Mozilla's Thunderbird 3.1 email client is now officially the best one Ken has ever used. Lightning integrates the retired Sunbird calendaring applet closely with Thunderbird, adding an Events and Tasks menu and a handy calendar sidebar to the intuitive tab-based Mozilla interface. Attachments, recurrence, event-level privacy for shared calendars – it's all there. The only drawback to Thunderbird now is that it does not play seamlessly with Microsoft’s messaging systems, but then again, what does? Ken just copies himself when using a client's Web-based Outlook account – inelegant, but it works. Ken has found that a picture is often worth at least several hundred words, and the best free tool he has found for doing mock-ups is Inkscape, an incredibly sophisticated open source vector drawing tool – so sophisticated, in fact, that you can actually buy a user's guide for it. The comparable proprietary tool is Adobe's Illustrator, but the interface most reminds Ken of the late, great FreeHand. On the most rudimentary level, you can combine simple shapes and join text to paths or shapes to spice up your PowerPoint presentations. The tool goes a lot deeper, supporting cloning of linked objects, glyphs, and of course a slew of embellishments and filters. It can import and export virtually every format (including Illustrator and Corel DRAW), and if you ever need to do a flowchart, it has a neat "connectors" function to create persistent binds as you shuffle your label boxes. It's actually way more drawing power than the typical consultant needs. Microsoft – yes, Microsoft – actually gives away a real-time AV solution that, by most accounts, is quite viable. And it's already in version 2.0.657.0. Of course, since Microsoft's operating system is constantly under attack, most folks might say it's about time Redmond protected its own turbulent ecosystem. All the expected features – real-time updates, removable drive scanning, process exclusion – are there, and Security Essentials also can be set to check for anomalous patterns. The one knock on Security Essentials tends to be resource consumption; the malware agent runs at about 65,000K on Ken’s Windows 7 laptop, but he has seen no real lags in overall system performance. Little things mean a lot sometimes, and DuckCapture from DuckLink Software succeeds where so many screen grabbers fail – it can catch scrolling Web pages in any browser you may be using. (Ken’s guess is that it's because it requires Microsoft Visual C++ 2010, but so be it.) The interface is very simple – captures queue up in a preview window where you can annotate them and even snap a second image for composite before saving your grab. There is a paid version of DuckCapture, but unless you want to extend it with your own scripts, there's no need – the free version is quite robust.

Free version with no upsell, unlimited use. Even in the era of "the cloud," backing up your important data to a local source (i.e., a cheap USB 2.0 hard drive) is always a good idea. Ken really likes FBackup from Softland, now in version 4.5. You can set regular backups to either zip files or true mirrors locally or on a network resource. (Actually backing up a network resource, or posting your backup remotely via FTP, requires an upgrade to the paid version.) Managing multiple backup jobs for specific tasks is a snap, and there are handy tutorials about setting up jobs for common applications, such as Outlook. Really, there's nothing to complain about with Fbackup. Depending on the complexity of your business, a simple invoicing solution may be all you need to track billables without worrying about payroll or inventory. NCH Software offers a free version of its Express Invoice package for small shops with five or fewer employees (be sure to use the "Get it Free" link on the left of this page). The free version of Express Invoice is not as graphical as many of its competitors, but Ken has found it easy to create a simple database of customers, quotes, and billable items, complete with presumptive tax rates. (There is a simple level of inventory control at the Item level, but he’d suggest that if you need to actually manage inventory, you should buy a tool for it). Minimal invoice customization is available, mostly in the form of logo insertion, and there's even a simple Web-based access to a backup of your account info. NCH offers a wide range of business solutions (including that inventory software you might need) that work as part of a suite, and you can expect limited upsell to these tools and the multi-user pro version of Express Invoice in the free tool.

Free with limited upsell, unlimited use for small organization. Suggesting a free alternative to an already free product (Adobe's Reader X) may seem like a stretch, but PDF-XChange Viewer from Tracker Software is so feature-rich that Ken scores brownie points by recommending it to folks. You can actually create visible type inside a PDF with PDF-XChange Viewer, which makes filling out business docs a snap. There are also embedded screen grab tools, a slew of drawing tools (including one for "thought bubbles"), opacity controls, and a tabbed view for multiple docs. It even has built-in zip compression for sending PDFs via email. Tracker Software uses the freeware to upsell to a pro version (you still can't extract or combine files) and its development competitors to Acrobat, so you will see some menus for non-available functionality. Still, PDF-XChange Viewer is just great free software.

Free with some upsell, unlimited use. Ken first came across Trellian WebPage when he was looking for a handy tool to do some very basic HTML content editing inside a page that was loaded with scripts. Trellian became his editor of choice because it is stable – other "free" editors tended to crash. A lot. In addition to its stability, WebPage has a built-in script editor, absolute positioning of HTML elements, embedded image editing tools, and a generally usable layout reminiscent of the Windows "ribbon" interface. And of course a built-in FTP client, etc. Trellian uses its freeware editor to upsell to SEO and keyword marketing services, and some buttons led to a sales pitch, but all the functionality you need is there for simple page/site management.

Free with some upsell, unlimited use.