The Path to Mobile Payments 2015

In-store mobile payments became a hot topic toward the end of 2014 with Apple Pay and CurrentC joining the arena with other contenders such as Google Wallet. All are vying for the top spot, but are consumers ready? While a number of security issues need to be worked out, as with all technology – old or new, the industry is moving forward, locking infrastructure into place for widespread use across the U.S.

A recent Verifone survey, conducted by Wakefield Research, of 1,000 adults 18 years and older, found that more than half of respondents – 53 percent – felt it was important for stores to install devices that enable consumers to pay with their smartphones, indicating wide receptivity to mobile pay options once available. Not surprisingly, the desire for mobile payment access was higher among those 40 and younger.

“The survey data illustrate a typical early adopter scenario – high awareness among younger consumers, which is the essential precursor to mass market adoption,” said Joe Mach, senior vice president and general manager of vertical solutions at Verifone. “The mobile payment industry is an industry on the cusp, with so many components essential to success, such as EMV and Apple Pay, coming into focus for the first time, and delivering real value to the end user.”

Among the advantages cited for using smartphones instead of traditional payment methods, speed of use ranked first (34 percent), followed by freedom from carrying a wallet (29 percent), access to mobile deals (24 percent), ease in tracking spending (23 percent), and safety of personal data (18 percent). 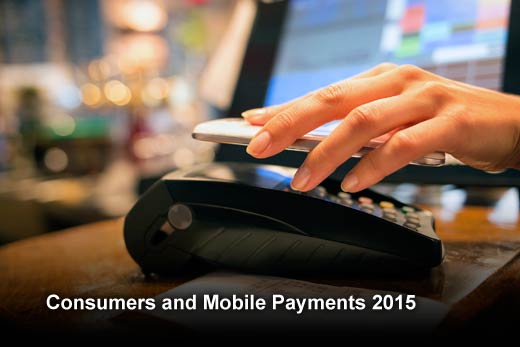 Click through for results from a survey that looks at consumer in-store payment behavior and attitudes toward mobile payment technology, sponsored by Verifone and conducted by Wakefield Research. The Shift to EMV 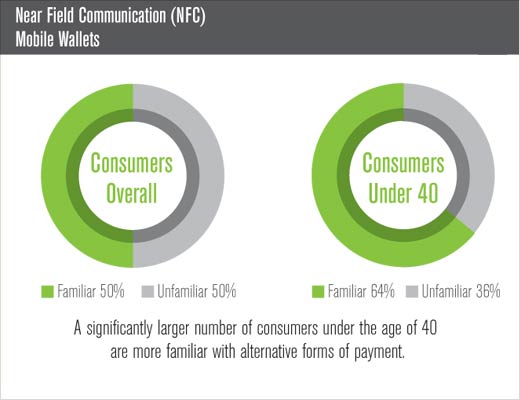 The survey showed that half of consumers polled were unfamiliar with mobile technologies such as near field communication (NFC) and mobile wallets. Similarly, half of respondents said they were unlikely to shop in a store because it used in-store tracking technology to provide offers on mobile devices.

“This is a classic case of new technologies needing to reach critical mass before consumers come on board,” said Mach. “Today, in 2015, the pieces are fitting into place – what’s essential now is for the industries driving the mobile payment revolution, from finance to retail to systems providers, to educate consumers on mobile payment’s benefits and easy use.” More than half of respondents – 53 percent – said it was important for more stores to install devices that enable consumers to pay with their smartphones, indicating wide receptivity to mobile pay options once they’re provided. The response was significantly higher among younger consumers; 64 percent of respondents aged 40 and below agreed that more stores should install devices that allow customers to use smartphones to pay. 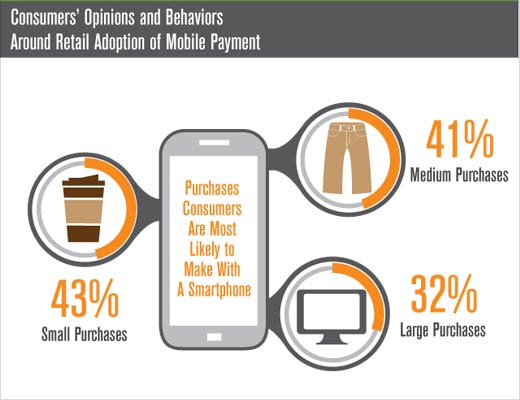 Eighty-four percent of respondents said they would use their smartphones to pay for small and medium-sized purchases, such as a cup of coffee or pair of jeans. Overall, 58 percent of respondents were comfortable with the idea of stores using their purchase history to customize future shopping experiences. Consumers are split on the use of in-store tracking technology, with half of respondents saying they were unlikely to shop in a store because it used in-store tracking technology to provide offers on mobile devices. Again, not surprisingly, those under 40 were more open to the idea with 65 percent reporting they would feel comfortable with such technology.