The Evolution of Communication Technology

Even before the emergence of technology, communication has been at the forefront of relationship building and business development. The changes in communication technology over the last four decades have been revolutionary. Now with more millennials in the workforce than baby boomers, the way we work and communicate with one another is changing. Ray Tomlinson’s recent passing further reminds us of how far communication has come since he founded email in 1971 and reset the standard of how we talk to each other. 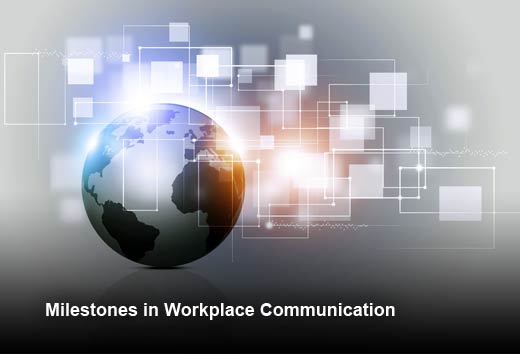 Click through for a review of workplace communication milestones, as identified by Kore. 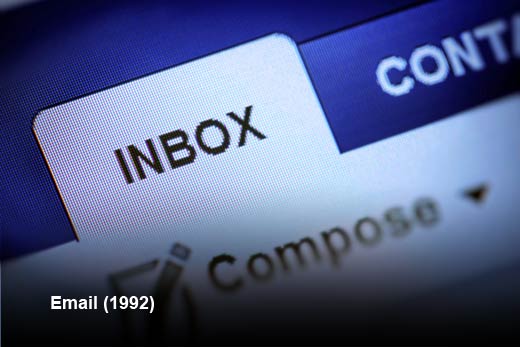 Although initially invented by Ray Tomlinson in 1971, it wasn’t until 1985 that email was commonly used by academics, government employees and the military. Since these groups had early access to the Internet, they adopted it before many other groups. In 1992, Microsoft Outlook was released and influenced the ways in which businesses used email. It became a key factor in changing the way work was done. Instead of interacting in person, or relying on fax machines and phone calls, email allowed businesses to have more instantaneous connections to people all over the world. Additionally, the ability to create a written record of processes, logistics and decisions was very beneficial to organizations. Email revolutionized the way business is done and has resulted in a more efficient and dynamic workplace. 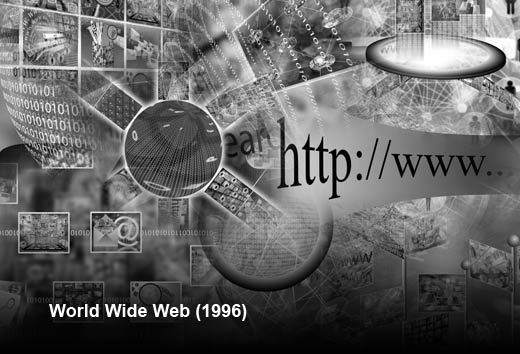 By 1996, it became obvious to most organizations that having an online presence was not optional. When people became more familiar with browsers like Netscape Navigator and the benefits of two-way online communication, this led to e-commerce, worldwide group communications and the creation of “dot-com” addresses. In 2002, Web 2.0 emerged and brought new ways of sharing and exchanging content. The boom of user-generated and user-edited websites led to service-oriented startups thriving in a newly democratized web. It was easier to search and use, and led to rapid popularization among businesses. 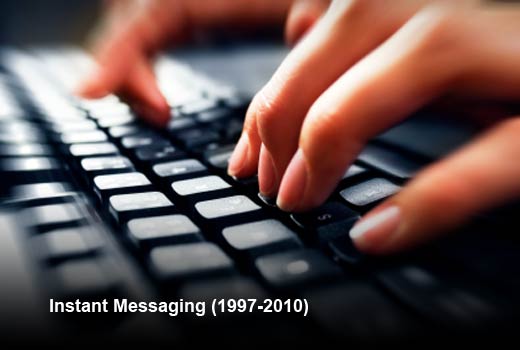 In the early 1990s, Quantum Link’s application, known as “On-Line Messages” or “OLM,” was the first provider of services designed for real-time communication between connected users. It was essentially a chat log, and although there are many differences from the business chat software we use today, it had the same basic tools and features for communication. When AOL launched AIM in 1997, a new generation of tech-savvy Internet consumers was attracted to this technology and the term “instant messaging” took off. Tens of millions of these personal accounts were also used for business purposes and colleague interaction. The demand for instant messaging at work led to “Enterprise Instant Messaging.” Lotus Software launched IBM Lotus Sametime in 1998, followed by Microsoft shortly thereafter with Microsoft Exchange Instant Messaging. Enterprises began building their own platforms for real-time communication using an internal IM server to avoid the security risks and legal liabilities. 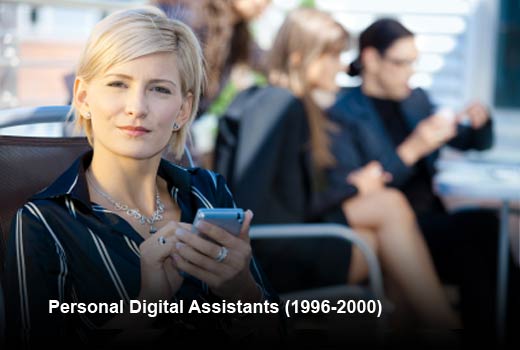 In 1996, Palm entered the PDA market with its line of devices named “Pilot.” Many of the original PDAs such as the Apple Newton and Palm Pilot were simple, having only a few buttons and a touchscreen—very modern for its time. The touchscreen PDAs that were intended for business use — such as the Palm Treo — offered full keyboards and scroll wheels. Businesses and government employees often relied on a form of PDAs known as enterprise digital assistants (EDAs) or mobile computers. These devices benefitted the military, supply chain management, package delivery, medical treatment and recordkeeping, facility maintenance, parking enforcement and hospitality with their ability to data capture (i.e., barcode readers and magnetic stripe readers). 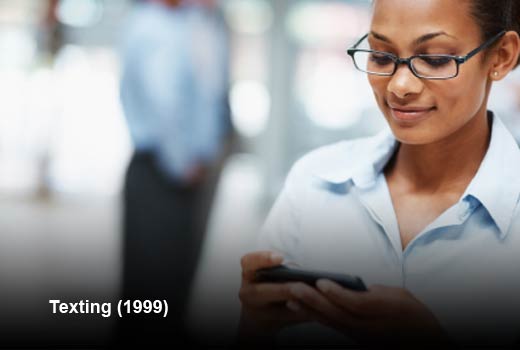 Since 1999 when texting gained momentum with cell phone users, it has transformed human behavior and has become a primary form of communication. It has influenced the workplace as well, and while it is widely known as a casual form of communication, the concept of texting is still seen as professional. In companies that provide corporate cell phones, texting is an even more legitimate form of communication. Aside from the standard SMS text messages, companies like WhatsApp and TigerText have emerged in recent years to offer ways for smartphone users to connect. The cross-platform approach benefits business users who may live in separate countries or are part of different networks that are not as compatible with one another. The BlackBerry 850, released in January 1999, changed the influence of mobile personal devices in the workplace with its calendar and email functions that enabled people to do business more easily. However, it wasn’t until the BlackBerry 5810 in 2002 that the devices were marketed as phones with email rather than as pagers. In addition, it also offered SMS text, a more advanced calendar system and primitive web browser functionality. Due to the advanced encryption capabilities of the BlackBerry, it is eligible to be used in government positions in additional to corporate business. In the UK, transportation systems implement the devices to improve the communication between control, guards and passengers. Shortly after social media sites caught on with the average consumer, businesses began realizing the benefits of having online interactions and profiles. In 2007, there were more than 53 million active Facebook users and an average of 250,000 new accounts opening every day. Facebook quickly expanded to allow brands to create profiles that users could become a “fan” of. This idea was originally intended for household brands with big marketing budgets, but that evolved to allow any company to create a page. The ability of businesses to connect with customers on a new, more intimate level completely changed the way marketing is done today. Social media fosters connections, so companies know it is important to connect to their target audiences and work to make those genuine relationships. When Twitter gained momentum in 2007, brands were attracted to the notion of concisely promoting products and engaging with followers. Since there is a 140-character limit to each tweet, companies are forced to be succinct about the messages they want to publish to their profile. 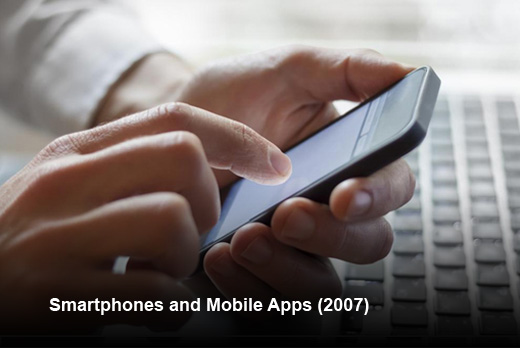 When the smartphone revolution gained momentum in the late 2000s (largely in part with the Apple iPhone launch), they quickly became substitutions for digital cameras, personal gaming devices and even PCs and laptops. With this success came a lot of speculation on how the devices would impact business. Employees could accomplish more on the go and were not tied down to their desks. Today, with millions of apps available for both Apple devices and Android, the possibilities of what smartphones can do are limitless. There are apps for messaging, videoconference calls, storing documents, filing expense reports; organizations are even creating their own apps for employees to do business. The workplace has changed dramatically with the influence of the smartphone, and with the flexibility of these smart mobile devices, people are more productive. Mary Meeker’s 2015 Internet Trends report found that 45 percent of millennials use their personal smartphones for work purposes (versus 18 percent for older generations). In recent years, the concept of “bring your own device” (BYOD) has become widely discussed as IT departments attempt to merge employees’ mobility with company security. 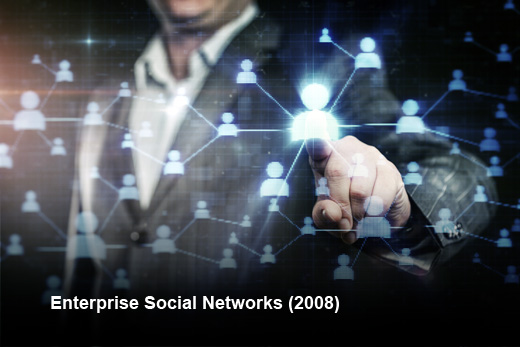 Like consumer-focused social networks such as Facebook and Twitter, businesses adopted social applications for the workforce to create that same type of community and camaraderie among employees. A company’s staff is sure to have personal accounts, but businesses realized that it was necessary to have a professional version for work-related conversations. Beginning in 2008, products like Jive, Yammer and Chatter revolutionized the social aspect of business communications. The tool was designed to help organizations work more efficiently and effectively, and Chatter was noted as “the most exciting thing I’ve worked on in my career” by Salesforce’s Marc Benioff. In a world where email is the primary form of communication, social sites such as these provide a more casual way to communicate that doesn’t require employees to be as buttoned-up in the content they share. 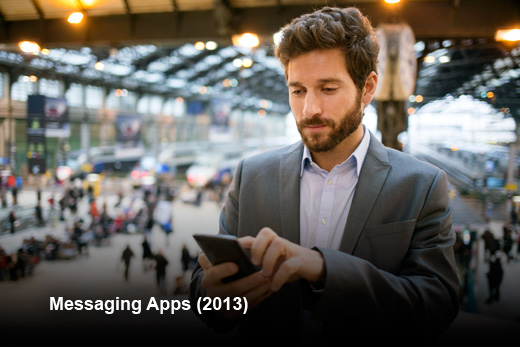 Although employees could connect to one another through email, social platforms and instant messaging services like Microsoft Lync on their PCs, smartphones were the primary technology being used. With this change came the need to mobilize communications. Messaging apps like HipChat, Ping and Cotap emerged to allow for more collaboration such as file sharing and more productivity in a culture that is more fast-paced than ever. In Mary Meeker’s 2015 Internet Trends report, 34 percent of millennials prefer to collaborate online at work versus in person or via phone (compared to 19 percent for older generations). With remote working on the rise, messaging apps allow teams to work seamlessly and effectively. 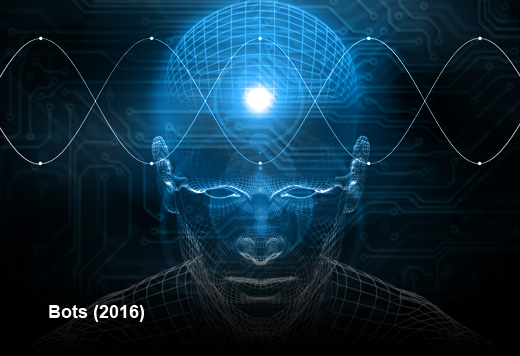 Bots are the next step in enterprise communication, as they ultimately are what will make communication easier and more automated. Coupled with artificial intelligence (AI) and natural language processing (NLP), bots are providing the type of communication that’s needed to make employees’ jobs easier. The medium for bots can be whatever means of communication people prefer or what makes the most sense for the business scenario. Bots can interact on messaging platforms, email, within social collaboration tools, SMS text or even a phone call. We are using more applications than ever before to get our jobs done. In fact, research from SkyHigh Networks showed that the average employee actively uses 30 applications for work, including eight collaboration services, five file sharing services and four content sharing services. The impact of AI and NLP means that we will interact with systems and machines like we do with people – through either text or speech. Companies like Kore are at the forefront of offering this new way of workplace interaction.