Samsung Electronics hit the smartphone comeback trail today with the launch of a Samsung S8 device that comes with a bevy of enterprise-class capabilities, including a docking station that can be used to access both cloud and Windows applications via a display and a keyboard connected to the docking station.

DJ Koh, president of mobile business communications for Samsung, says the Samsung S8 devices represent the culmination of an effort to not only regain customer trust after Samsung 7 devices had to be recalled due to explosions, but also an effort to redefine the mobile computing experience.

“We think the way people think about mobile cellphones is too narrow,” says Koh.

Samsung disclosed that a bevy of applications optimized for the Samsung S8 will soon become available, including productivity applications from Microsoft and various types of augmented and virtual reality applications addressing both consumer and corporate use cases.

Jeffrey McGrath, senior director of product marketing at VMware, says VMware views the Samsung S8 as a way to make it much simpler for end users to access files on their PC without always having to have access to a Windows device. The integration between the VMware desktop virtualization and collaboration technologies and the Samsung DEX docking station is made possible via a set of application programming interfaces (APIs) that Samsung has made available to technology partners, says McGrath.

“It turns the Samsung 8 into a thin client,” says McGrath.

The Samsung S8 comes in 5.8 and 6.2-in. form factors. Based on a more energy-efficient 10-nanometer processor, the Samsung S8 Series also makes use of new Infinity display technology that wraps around the edge of the devices to provide a richer visual experience. That display is augmented by a pair of eight- and 12-Megapixel cameras embedded in the smartphone. 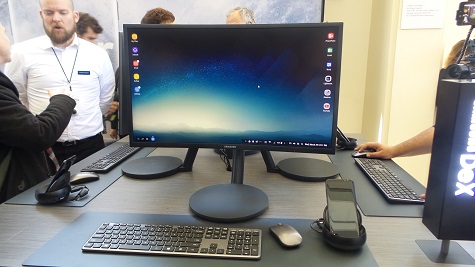 In addition, Samsung unveiled a Bixby digital personal assistant that is aware of what’s happening on the phone. Bixby can, for example, be used to identify the locations near where a photo is being taken.

The Samsung S8 devices support multiple forms of authentication, including an iris scanner, fingerprint reader, facial recognition, pattern matching and traditional passwords. Samsung also touted the ability to seamlessly integrate Samsung devices with Samsung Pass, an identity management service that can be used to access third-party applications and services, and Samsung Pay, the company’s digital wallet. In addition, Samsung is positioning the Samsung device as a remote control for any number of Internet of Things (IoT) scenarios via its Samsung Connected initiative.

It may be too early to say that Samsung will recapture its lost smartphone sheen just yet. But from an enterprise IT perspective, Samsung is making it clear it’s on a path toward turning the smartphone into a universal remote for the enterprise.