How Wearable Devices Are Creating Innovation in the Workplace

As wearable devices evolve, they will take on more functionality, especially within the workplace, potentially affecting the data within a wide range of industries.

On one hand, wearables are revolutionizing the workplace, with innovations that create a safer work environment or enhance the way professionals are able to go about their job. Expect to see developers produce new versions of devices and apps to accommodate wearables in the workplace, enabling improved network access and offering new collaboration tools for employees.

On the other hand, wearables open the door to potential security risks.

“This will also introduce new vulnerabilities as wearables can be accessed via Wi-Fi and Bluetooth,” said Varun Kohli, VP of Marketing at Skycure. “A hacker can leverage either or both gates to get access to wearables to steal both personal and corporate data. More importantly, new applications written specifically for wearables are bringing new vulnerabilities to the app level.”

Because developers are most interested in getting their product to market, this leads to them taking security shortcuts that will affect the overall risk posture of the organization. Bringing in these wearable/IoT devices opens the door for hackers and hactivists looking for an easy in.

Here are some of the ways wearables are changing the workplace – and one device that we never think of as wearable but may be the most important device we own. How Wearable Devices Are Creating Innovation in the Workplace

Wearables are revolutionizing the workplace, with innovations that create a safer work environment or enhance the way professionals are able to go about their job. A wearable that monitors exposure to radiation

For many professionals, such as health care workers, construction workers, and those who work in the airline industry, radiation can be an occupational hazard, but they aren’t always aware of the levels of radiation or of their risk for exposure. A wearable device called Dosime monitors exposure to radiation. In wearable mode, the Dosime device can be clipped to clothes, purses, backpacks or briefcases for on-the-go readings, capturing real-time radiation exposure in the environment and storing radiation records. The device can also be connected to an app that records radiation records. If the Dosime device detects exposure levels that exceed prescribed alert levels, the device immediately alerts the user with a visual alarm, as well as through configurable text, email and audible mobile alerts. One of the biggest upcoming trends in wearables in the workplace could be “hearables” — high-tech, in-ear devices like Nuheara IQbuds, which are designed for augmenting hearing. Hearables let people who struggle to hear voices in loud work environments to cut through the noise to better communicate with others. Some devices even allow workers to control how they hear the world around such as horns or sirens from vehicles, forklifts or other sources without affecting their ability to communicate, while others will translate languages.

“Hearables are essentially computers in the ear,” explained David Carrington, co-founder of Nuheara. “Using sophisticated, innovative in-ear technology hearables not only enables hands-free, voice-activated communication but also the ability to measure and analyze user behavior as it relates to noise and location, delivering actionable data to management to improve worker productivity.” 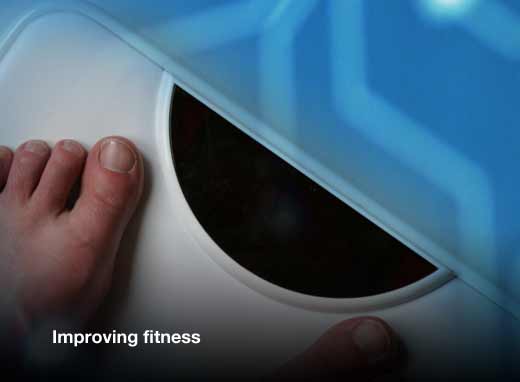 Lots of businesses have added fitness trackers to the office, encouraging their employees to move more. The fitness trackers may be required by insurance companies to ensure that policyholders are staying active; some businesses have set up fitness challenges as a way to incorporate camaraderie and collaboration among staff. But there are more options than just fitness trackers for improving health within the workplace. Posture monitoring devices keep employees from slumping over their keyboards and promote better back health, other wearables measure hydration levels to make sure everyone is getting enough water, and another device helps to lower stress levels by giving mini-massages.

Being a smart dresser takes on a whole new meaning with wearable devices being designed into clothing. Project Jacquard is a collaborative effort between Google and Levi Strauss. As explained in a Wareable article, “Google and Levi’s has produced a conductive yarn that combine thin metallic alloys with yarns that you typically find on clothing. In the case of the Commuter Jacket, this interactive yarn has been used to build touch and gesture sensitive areas on the sleeve and sensor grids can be created for even larger interactive surfaces.” Wearables aid lawyers in the courtroom

The Lamber Goodnow legal team in Phoenix are using wearables in the courtroom. According to James Goodnow and Marc Lamber, the team has used Google Glass to tell a client’s story – an individual who was involved in a catastrophic injury. The wearable gave the lawyers the opportunity to show hardships our client encountered every day. “Using Google Glass also opened the line of communication with the client because, despite his limitations, he could still communicate with us remotely using voice activation,” they said.

In addition, the Apple Watch improves lawyer availability and representation to clients. “Our clients know we can add them to our VIP list, and their e-mail or text messages can be filtered to our watches, so we can see them right away. This sends a message to our clients that they’re important and we’re readily accessible to them.” It’s not your typical wearable, but Bill Bartow, vice president of global product development at Kronos, suggests that your smartphone is the ultimate workplace wearable. “Instead of trying to encourage employees to adopt a new technology such as smart badges or other activity trackers, there are a host of ways organizations can engage with their workers through a device they already don’t leave home without,” says Bartow. And not only don’t they never leave home without it, they are almost always “wearing” it somewhere on them, whether in a pocket or on a belt clip.

As one example, Bartow questioned why an employee should need to punch in anymore. “With a mobile app on their phone, an employee’s 3G/4G, Bluetooth, NFC, or Wi-Fi can automatically ‘punch in’ the employee when they walk by the timeclock at the employee entrance. No need to stop – it is one less thing for the employee to worry about.”