Most of us have smartphones and know first-hand how many apps have helped improve our personal and business lives. But what we probably don’t realize is that now apps do much more than organize our days and entertain our kids. In fact, plenty of apps are available that can potentially help save lives.

Under a $50,000 grant from the National Highway Traffic Safety Administration, the Maryland Highway Safety Office has developed an app called ENDUI. The app, which could be particularly useful at this time of year, assesses whether a person is alcohol impaired and, if so, it offers to call a taxi. It’s sort of like having a straight-talking friend in the car:

The Maryland app uses good, old-fashioned data input and mind games to offer an estimate on blood-alcohol content (BAC). Users enter their sex, weight, and height along with the number and type of drinks they’ve consumed to establish a baseline. For example, ENDUI estimates that a woman who weighs 130 pounds and has consumed a single glass of wine will have a BAC of 0.04%. That may not meet the federal and state limit of 0.08% BAC, but it’s enough that the app will suggest calling a taxi anyway.

Similar efforts are underway in California, Colorado, New Mexico and New York, according to InformationWeek.

People don’t give blood every day, but those who do so regularly may be interested in an app from The American Red Cross. The Blood Donor App schedules blood donations, tracks total donations, and enables users to earn rewards and invite friends to donate.

In July, Rogers, Arkansas, spent $30,000 to give its residents, and those within a half-mile of the small city, access to an app that notifies those certified in CPR when a cardiac emergency occurs nearby. PulsePoint Respond, the website for KFSM and KXNW says, is widely in use in other locales. The app can be downloaded to both iOS and Android devices. 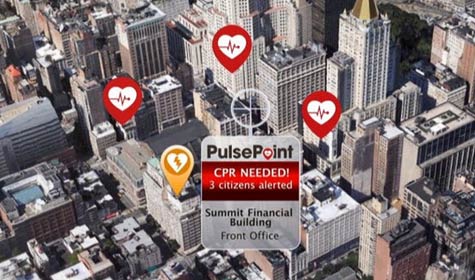 Epilepsy is a frightening disease, but one that is actually fairly common. PSFK says that one in every 26 people experiences epilepsy during their lifetime and more people die of Sudden Unexpected Death in Epilepsy (SUDEP) than in house fires annually.

Empatica, a company that created a wearable bracelet-style seizure-detecting device that monitors epileptic activity, also offers a smartphone app for those close to the wearer. Embrace, which currently is attempting to raise funds on Indiegogo, alerts contacts via an app when the wearer is having a seizure:

Worn on the wrist as a smartwatch, it monitors electrodermal activity (EDA) and is strongly activated during the kinds of seizures that can cause a person to stop breathing. When this happens, it alerts the user and elected friends, family or caregivers via a smartphone app so that they can provide immediate assistance.

Also, if two people wearing Embrace are in proximity to each other and one has a seizure, the other person will be notified.

Working on iOS and Android, the iWitness app costs $29.99 (or $2.99 per month), connects to local emergency services and records whereabouts. It works in as many as 146 countries. Touching a button on the screen or even shaking the phone once the app is active calls 911 (or the equivalent) and/or records for five minutes. During that time, the predicament the owner is in can be made clear.

As far as apps go, these are just the tip of the iceberg. Dozens of other emergency and health-related apps are available and in development.