I’m at the Microsoft Devices Launch this week and there is a huge amount of anticipation for what will be announced. This is CEO Satya Nadella’s first big device launch and the hope is that he will do what Steve Ballmer couldn’t: Build excitement on Windows hardware. The show opened with stats that indicated 110 million Windows 10 desktops are now in use, massively exceeding any prior Windows launch. Development on Windows has quadrupled, showcasing what these numbers mean for developers. Business, which typically waits for the maintenance release of a new OS and pretty much passed on Vista and Windows 8, has moved 8 million desktops to the new platform also, well ahead of any other OS from the company (or any company, for that matter).

But this is about devices, the hardware that we touch. And while a lot of devices from partners are coming to market, this event is about Microsoft devices — products like Surface, Xbox, Surface Hub, Lumia and the Microsoft Band. Oh, and then there is HoloLens. Effectively, this is the tease for that product, which promises to eventually make computing as we know it obsolete.

I’ll touch on HoloLens at the end. Right now, let’s focus on the business-focused offerings, Lumia and Surface.

The 950 family of devices maps well to the new iPhones, but with enhancements. For instance, two antennas address the problems that the iPhone 5 first identified — your hand can do a decent job of blocking the signal. With two antennas, the phone can route the signal around your hand to always get the best signal possible, regardless of how you hold the phone. 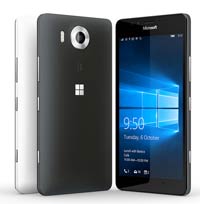 Lumia is coming in two versions, 5.2” and 5.7” phones using OLED screens. What makes OLED better than LCD is that, rather than backlighting, each pixel is individually lit, which means you can turn the ones you aren’t using off, leading to blacks that LDC just can’t approach. This makes the images brilliant.

Cameras have been enhanced with a 20MP sensor and a triple LED RGB natural flash. This eliminates red eye and gives true color (it doesn’t white out people). It still has a dedicated camera button, Zeiss lenses, and a mechanical image stabilizer (this takes the load off the processor and typically provides stronger stabilization than software can provide). The phone has 32G of memory and supports the new flash standard, which will allow you to use up to 2TB flash once it is available (currently, the biggest is 256G). Can you imagine 2TB on a phone?

Fast and inductive charging comes in the phone (you can get to 50 percent charge from nothing in 30 minutes).

This includes the beta of Microsoft Hello. This is tied to a special, and additional, IR camera, which authenticates with your eye. Yes, this is the first phone with eye biometrics, generally thought to be far harder to overcome than fingerprint technology.

Perhaps the most interesting is Continuum, which allows you to connect the phone to a monitor and get a Windows PC experience. With a small dock, you can plug the phone into a mouse, keyboard and monitor and get a full Windows experience from the phone. Tied to Office 365, this will remember state and return you to where you left off when you saved your document last.

What is interesting is that you can still use the phone as a phone. Continuum is working in parallel with the phone functions. It is like having an invisible PC that is with you magically if your phone is with you.

(As a side note, this is the most entertaining demonstration I’ve ever seen Microsoft do. I’d often lament that Microsoft would use presenters who weren’t good at doing presentations. Well, they fixed that. This is Apple quality, no, this is close to Steve Jobs Apple quality. They have really come to play this year.)

Of course, you can connect to a TV in your hotel room, with both HD audio and video. They showcased a streamed trailer for Jurassic World on the big screen from the phone and it was as good as you would get off a Blu-ray player. Granted, you’ll need a room that has an HDMI jack (which I don’t seem to be able to get often), but if you have one, your phone can give you your TV off your phone.

There is a second line of phones, the Lumia 550, which doesn’t have all of the features but has an unlocked price of $130. I’m thinking this is a great phone for the kids.

Surface Pro 3 has been a hit in business. It’s so much of a hit that it drove Apple to create the iPad Pro and sign an alliance with Cisco and IBM to help sell it. Surface is a laptop forward design and it positions against the MacBook Air more than the iPad because it is a full laptop that can morph into a laptop. I’m actually writing this column on a Surface. It is good but it isn’t my favorite laptop. It is great with pen and touch but while it is the best Windows tablet, I like other Windows laptops better. Having said that, 98 percent of the people who use Surface recommend it and the audience was full of Surface fans. 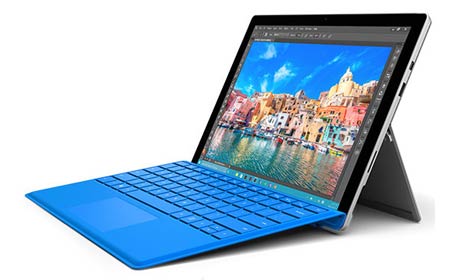 Surface 4 does what few companies get. It fixes what needed fixing and doesn’t break what was working. The big fix is the keyboard. Surface 4 now has a laptop-quality keyboard (which can be purchased for a Surface 3). You get better spacing, better feel, and a glass touchpad (40 percent larger) with far better false touch (think cursor bounce) rejection. Screen size is up .3” and 267ppi (5M pixels). This is an amazing screen. This product takes PixelSense, a unique technology that was created for the old Surface Table, and puts it on the tablet. This makes it work far better with a pen and the pen actually has an eraser that works. The pen has 1024 points of pressure and it can emulate ink flow and the pen doesn’t need to be recharged, it just works. They got rid of the pen loops and it now attaches to the Surface 4 magnetically. I’m not a pen fan, but if you are, you’ll love this. The pen works like a pen should, and the transformation from ink to digital content, demonstrated by someone writing a symphony by hand and automatically transitioning from writing to music, is almost magical. Oh, and the pens come in colors.

This is one of the first products that uses Corning Gorilla Glass 4, which is a big jump from 3 and allows the screen to be thinner, lighter and still very robust.

The Surface 4 is 30 percent faster than Surface 3 was (according to Microsoft, 50 percent faster), and it has 16GB RAM and a TB of storage. It is about 10 percent thinner (now limited by the thickness of the USB 3.0 ports).

A new docking station will also work with Surface Pro 3 and it will provide output for two DisplayPort 4K displays. That’s pretty impressive for a laptop, and unheard of for a tablet.

Surface 4 implements Windows Hello using the same kind of special camera used by the Lumia line and an optional keyboard uses fingerprint recognition, which can be used with Surface 3 and give a biometric solution for the older product. (Think about it, most vendors force you to buy a new tablet or laptop to get the new feature.)

Surface Book: I Love It

OK, we could have stopped there and I would have been good. But Microsoft had one more thing. This gave me chills. Microsoft created the ultimate laptop. With Intel processing and NVIDIA graphics, it created a piece of art. From the hinge that expands mechanically to increase the base when open to provide better balance to the almost carved appearance, this really is an amazing product that you have to see to believe. It uses a special 13.5” screen with 267PPI or 6M pixels; this has color, contrast and clarity that currently lead the segment. This has the best keyboard Microsoft has ever made. It has a glass trackpad with five points of touch. This is for the engineer, architect or gamer; it has a balance of performance and battery life that should lead the segment. This is one of the first Intel Skylake laptops and Microsoft believes that, ounce for ounce, this is the most powerful laptop ever created. It has 12 hours of battery life. You typically don’t get that level of performance, and it should be 2x the speed of the MacBook Pro. It will use the same dock that was showcased earlier. They demonstrated this with Adobe Premier Pro and showcased workstation-level performance out of a light power frugal laptop. Up until now, those two things were mutually exclusive. This also supports SD card expansion.

But there is one more thing. It transforms into a tablet.

Crap, this was so well done, I actually had tears in my eyes. The reveal was orchestrated perfectly. You just don’t see this from anyone anymore. Because the keyboard has the big battery and the GPU,  battery life drops to three hours and performance drops, but you can flip the tablet and put it back on the keyboard and get both the battery life and performance back if you want to create rather than just consume on the tablet. This is really the first no-compromise, true convertible tablet/laptop. You have to check out the hinge, which uses a dynamic fulcrum and muscle wire, giving you that perfect mix of laptop and tablet.

I really never thought I’d see the day that Microsoft did a product launch, other than Windows 95, that could rival Steve Jobs’ presentations at Apple. Granted, they still have an app problem that has to be addressed, but these are the kinds of products that can create excitement and can drive people back to the platform. That can create pride both for those that use and create Windows solutions. We closed with Nadella, who spoke to the vision of phones that transcend what phones have ever done, tablets that truly again can become laptops, and to users that move from being users of the product to once again loving the product.

This showcases again what can happen when you have a CEO who knows the company and the technology and loves both. In a world where boards seem disengaged and clueless, Microsoft’s board stepped up and made the perfect choice in a CEO. Today was a showcase of what can result. Microsoft has gone from treading water badly to contending for leadership again. That’s far from trivial and is the big takeaway here. Microsoft is back and OMG, it is doing amazing things.