The more senior an executive is, the more likely it becomes that they are dependent on their smartphone. As part of an effort to make that smartphone the center of the computing universe for business executives, Samsung recently unveiled a Samsung DeX docking station through which users of Samsung Galaxy phones can access Windows applications using desktop virtualization service. Now Ingram Micro, in collaboration with Samsung and Amazon Web Services (AWS), is taking that docking station concept a step further by making it possible to access Amazon WorkSpaces based on Microsoft Desktop as a Service software running on AWS from a Samsung smartphone.

As a multibillion dollar distributor that provides services to resellers, Ingram Micro has never made a service available directly to end users before. Renee Bergeron, senior vice president for global cloud at Ingram Micro, says the distributor is making an exception in this case to help Samsung drive adoption of an emerging technology. Bergeron says the Ingram service is aimed primarily at organizations that have a small number of business executives interested in using Samsung smartphones to access their applications. Any large-scale deployment of Samsung smartphones involving DeX would be referred to an IT services company that partners with Ingram Micro, says Bergeron.

“This service is really aimed at CEOs of smaller companies,” says Bergeron.

Most senior business executives spend their time consuming content rather than creating it. As such, they don’t generally need to carry a PC everywhere they go. A smartphone connected to a display via a docking station will suffice. Obviously, Ingram Micro is engaging in a little missionary work on behalf of Samsung to make that very point. 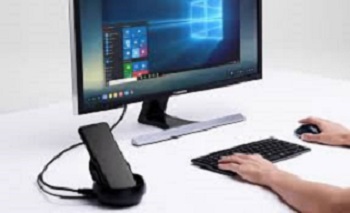 It may take a while for business executives to get used to the idea of using their smartphones to access Windows applications. But there are also probably more than a few IT departments that would like to be able to spend less time providing PC support to business executives that for the most part are doing little more than reading emails and opening the occasional spreadsheet application.

Previous articleAeroFarms: The Most Interesting Dell IoT Example
Next articleFull 5G Not Just Around the Corner