IBM z13 Coupled with Apple iProducts Could Be Unbeatable

What makes Apple stand out in the consumer electronics space is that it owns more of the specification and core technology connected with its iProducts than anyone else. This means it can control and assure the user experience better than anyone else, and by doing so, can both maintain higher margins and higher customer satisfaction than anyone else. The model of controlling as much of a solution as possible in order to assure the customer experience of a product preceded Apple and has its roots in the computer market in IBM and its original mainframe. The era of the mainframe was the era when IBM enjoyed its strongest customer satisfaction and loyalty; when the market moved away from that model, it also moved away from those legendary loyalty and customer satisfaction numbers, until Apple rediscovered the model.

The mainframe, even though it was prematurely declared dead in the 1980s, continues today as IBM’s most successful platform. This week, IBM announced its new z13 product, which ironically is uniquely designed to carry the load of mobile devices and, with the announced Apple alliance, should shortly connect for the first time the two ends of this highly customer/user-focused solution. The potential of the z13 is, by itself, impressive in customer satisfaction, reliability and security, but once connected to an Apple client infrastructure, it could be unbeatable. Let’s discuss that this week.

The Advantages/Disadvantages of High Vertical Integration

As noted above, both Apple and IBM are now executing partially on a very high vertical integration model and both regularly showcase that related products generate their greatest customer loyalty and profitability. Both firms make, or made, other products using industry standard technology but those offerings aren’t as popular or as profitable as their vertically integrated offerings.

This is because with Apple’s iOS and IBM z System offerings, the firms are able to more closely target and assure their related customer experience and differentiate on things that matter most to customers and users. The end result is that by controlling virtually everything, if the companies understand the customer need, they can better address that need because they have more control over the solution. The downside is that volumes aren’t shared across vendors and costs can be higher, but as long as the customers/users see value in excess of the cost delta, the value can, and in this case is, superior for the related products. This is why Apple’s iProducts and IBM’s z Systems have been so successful.

The reduction in relative complexity can reduce operating costs. While this isn’t apparent in Apple’s iProducts largely because those costs aren’t captured by buyers, in servers those costs are captured and the advantages surrounding IBM’s z System architecture, particularly when connected to open source offerings, have often proven to be significantly lower than competing systems. This potentially provides an additional operating cost advantage for these platforms. 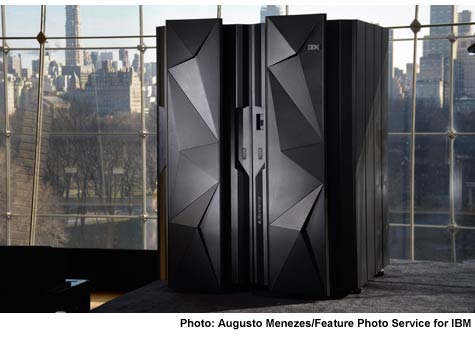 Finally, at one time, Apple’s systems were more secure because they were more obscure. Once they began to become more common, this security advantage eroded as attackers moved to the more popular platforms. IBM’s mainframe not only remains relatively unique, making it far harder to attack, but IBM has taken a very hard line on security going back to the middle of the last century, generally assuring that it starts out being more resistant, if managed correctly, than competing platforms right out of the box (or crate, in this case).

However, the latest iteration of IBM’s platform, the z13, was specifically designed to address the unique loads associated with mobile products. Because the underlying technology, which has its roots in mainframe, always has a significant advantage in I/O, it always did have an architectural advantage for mobile devices like the iPhone and iPad. This is because these devices tend to rely on cloud services for battery longevity and security; for storage and processing, a system that can handle massive numbers of concurrent clients is best and this is exactly where the z System shines most strongly. Siri, for instance, which is the signature feature of Apple’s iProducts, is hosted because it won’t work locally.

Now, if you couple iProducts at the front end to the z13 at the backend, the combination should be unmatched in security and performance. And it should create a user experience that stands well above what anyone else can provide because both Apple and IBM are uniquely capable of doing this better. This is the other shoe I expect will be dropped before the end of the year: a solution that bridges both companies’ best offerings into one that blends the power of IBM and Apple into something amazing.

It isn’t often you see the kind of perfect storm that we are likely to see when IBM and Apple bring out their joint solution. At one side, you have the most popular and successful mobile platform with Apple’s iPad and iPhone. On the other, you have a server designed from the ground up to service and secure mobile devices like the iPad and iPhone. Together, they should create something that is unbeatable and amazing, putting the rest of the industry on notice that messing with either firm is a bad idea and both together is suicidal. I expect it is going to be a very interesting year for everyone, and for Apple and IBM competitors that probably won’t be a good thing.