Google’s Android 5.0, which was known as “Android L” and now is Lollipop,  has been released. At some point, the company may run out of sweets after which to name its OSes.

Techno Buffalo has a nice package, a story and video, highlighting what’s new in Lollipop, which focuses on five changes. A key is “Material Design,” which is aimed at more sharply focusing content presentation. It includes graphical indications that highlight a piece of content’s origination point. Other changes include more sophisticated notifications, extended battery life, expanded device sharing – including the ability to reach the phone’s content from another device using Lollipop – and heightened security. Ars Technica offers more on the Material Design elements.

Lollipop, according to BusinessWeek, is a particularly important introduction for the company. The context is that Samsung, the biggest user of Android, is in the midst of disappointing sales results. European regulators are looking at whether Google is unfairly forcing vendors that use Android to pre-install its apps. (Those with long memories may recall the problems Microsoft had with a similar issue in the desktop Windows world.) Finally, its main competitor, Apple, appears to have responded to threats to its core business: iOS 8, the iPhone 6 and iPhone 6 Plus are getting “rave reviews” and a new iPad is schedule for release today. 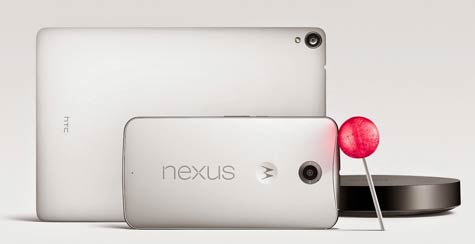 Google has unveiled three Lollipop-based devices, the Nexus 6 smartphone and the Nexus 9 tablet, alongside the new OS. InformationWeek said that “the defining feature” of the Nexus 6 is the 6-inch (2,560 x 1,440 pixel) display, the biggest ever on a Nexus. It features stereo speakers and a 3,200mAh battery, which can be expected to last a full day. It will hit stores later this month with a starting price of $649. Google also introduced the Nexus Player, a Lollipop-based device aimed at easing the link between Android devices and televisions.

The world of mobile OSes always is in constant flux, and each of the providers faces its own unique challenges. The introduction of Lollipop comes as the market seems to be more fluid than ever.