According to Gartner, while traditional PC shipments are forecast to continue to decline in 2014, the worldwide tablet market is forecast to grow 47 percent. Tablets have without a doubt invaded every aspect of our lives. Whether it is tablets for kids in the Los Angeles Unified School District or growth in Malaysia and Latin America, tablets are rapidly superseding PCs, smartphones and other forms of electronic communications. And while Apple’s iPad remains a perennial favorite, the many flavors of Android-based and now Windows 8.1 tablets have taken a big bite out of the market.

While many tablets are still oriented toward consumer use, such as reading, movies, gaming and social networking, many vendors have made a concerted effort to make their devices attractive to the business audience. With amped-up processors, multi-app capability, larger storage capacity, and integrated cloud access, the latest generation of tablets is beginning to meet the challenges and demands of today’s business user.

In this slideshow, we’ve pulled together some of the newest tablet offerings hitting the market from companies such as Samsung, Lenovo, Microsoft, Toshiba, LG, Acer and even Amazon. 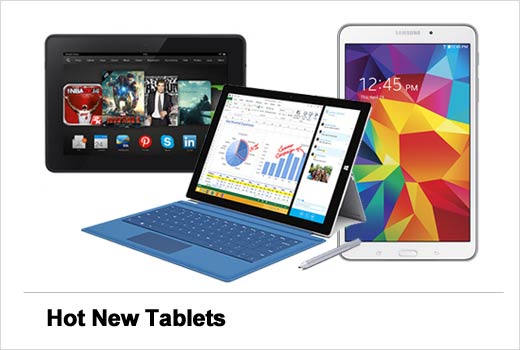 Click through for eight new tablets that will be hitting the market this summer or were recently released. Samsung recently released details on the new Galaxy Tab S series, touting its Super AMOLED display as the most advanced mobile display on the market. It has an industry-leading WQXGA (2560×1600,16:10) display that delivers 90 percent of Adobe RGB color coverage.

Users can make and receive calls directly from their phone to their Galaxy Tab S, no matter where their phone is with the Call Forwarding feature via SideSync 3.0. The Galaxy Tab S also allows consumers to multitask, enabling them to surf the Web, watch videos, share content and make calls simultaneously without having to worry about closing out of one to access another. With Quick Connect, Galaxy Tab S quickly finds and connects to nearby devices, for easy content sharing. These features are all available on both Wi-Fi and LTE versions.

The tablet will come in two sizes, a 10.5-inch (465g) and an 8.4-inch (294g) model. According to Samsung, the tablet can be easily used outdoors, even in bright sunlight. Since a backlight is not required, the Galaxy Tab S consumes less energy than comparable displays. Both models have a 6.6 mm profile, an Exynos 5 Octa (1.9 GHz QuadCore + 1.3 GHz QuadCore) or Qualcomm Snapdragon 800 2.3 GHz QuadCore processor, runs Android 4.4 KitKat, has an 8 MP camera with LED flash, and 3 GB (RAM) +16/32 GB internal memory, as well as microSD slot that supports up to 128 GB. 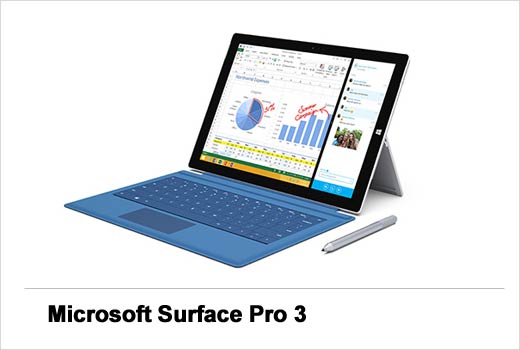 Mircrosoft recently released details on the new Surface Pro 3. Per comments from Rob Enderle, the “Surface Pro 3 looks like a much better thought-through product, possibly making this third-generation product the one folks may love, at least for work.” Microsoft is positioning the device as a lightweight tablet that packs the power and performance you expect from a laptop.

The Surface Pro 3 features a 12-inch HD display with 2160×1440 resolution, a 4th generation Intel Core i3, i5 or i7 processor, and a battery that provides up to nine hours of Web browsing. The tablet also includes an integrated kickstand that features multiple positions suitable for any task or viewing location, whether on a plane, at your desk or watching television. The Surface Pro 3 also includes a Surface Pen that lets you mark up documents, take notes or gather electronic signatures. 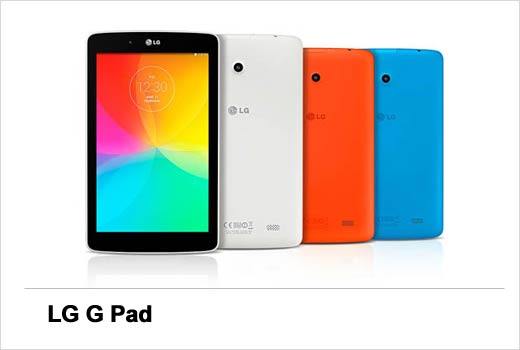 LG recently provided details on three new tablets it will be releasing in Europe to fill the gap between entry-level and premium tablets – the G Pad 7.0, G Pad 8.0 and G Pad 10.1. All three tablets will offer a 1.2 GHz QuadCore processor, 1 GB RAM, and a True IPS HD display (1280×800). The tablets will be available in five colors – black, white, red, luminous orange and luminous blue.

“LG understands that people have different needs and we wanted to provide consumers with a range of options in size, looks, and attractive price points that included the best of LG’s core technologies,” said Dr. Jong-seok Park, president and CEO of the LG Electronics Mobile Communications Company. “With our latest tablets, LG is giving consumers options to find a device that best fits their lifestyle and needs.”

The new LG tablets will also include the KnockCode security feature, allowing customers to power on and unlock their G Pad in one step with a pattern of taps. The G Pad will recognize up to four sets of knock patterns, which means multiple people can use the table and still keep their data secure and private. Designed for multiple users, the Samsung Galaxy Tab 4 was recently released to the market. Focused on entertainment, this tablet is ideal for reading, playing games, browsing the Web or watching movies. The Samsung Galaxy Tab 4 features an 8.0-inch, 1280×800-resolution screen, so you experience rich graphics, bright colors and crisp text. It runs Android 4.4 KitKat on a 1.2 GHz Snapdragon S5 processor, has 1.5 GB RAM, and a 16 GB hard drive.

The Multi User Mode allows for each person using the tablet to have their own personalized tablet experience, with their own music, games, apps and photos. It also includes a 3 MP rear-facing camera and a 1.3 MP front-facing camera, and the battery life provides for about 12 hours of Internet usage. Toshiba recently announced its Encore 2 line of tablets that will be powered by Windows 8.1. The tablets will be available in 8-inch and 10-inch screen sizes, and will be preloaded with apps like Xbox, music and video, Kindle Reader, Skype, and a one-year subscription to Office 365 that includes full versions of Word, Excel, Power Point, OneNote and Outlook.

The Encore 2 tablets will feature a satin gold matte finish and rounded edges for comfortable usage. Measuring 0.4 inches thin, the 10-inch Encore 2 weighs just 1.2 pounds, while the 8-inch version weighs less than a pound. Both tablets feature a bright HD (1280×800) multi-touch display – the 10-inch model is ideal for working on documents, Web browsing and movie watching, and the 8-inch model is geared toward on-the-go reading, entertainment and gaming.

Both tablets will be powered by a QuadCore Intel Atom processor and can be configured with up to 64 GB of onboard storage, as well as a microSD card slot supporting up to 128 MG. The Micro-USB2.0 port can be used for connecting to external devices, as well as charging, and each device can provide up to 10 hours of battery life. 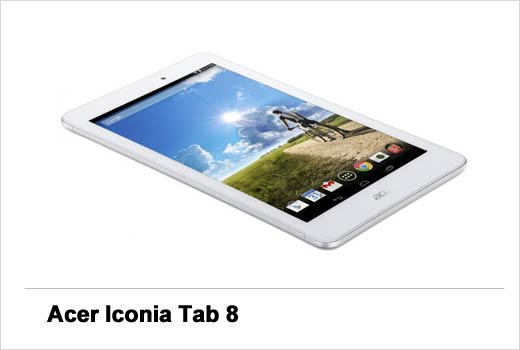 The Iconia Tab 8 includes Acer Touch WakeApp, which lets users quickly and easily wake up the Iconia Tab 8 with a simple touch gesture. The tablet keeps users connected to Wi-Fi networks with 802.11a/b/g/n wireless support, and MIMO technology brings fast Wi-Fi performance. Users can enjoy up to 7.5 hours battery life when viewing video. The tablet is 8.5 mm thick and weighs 360g. It is also equipped with a MicroSD card slot. Aiming for the business audience, Lenovo recently announced the ThinkPad 10 tablet. According to Lenovo, the 10-inch multi-mode business tablet offers a full PC experience with high-end productivity. Users can be creative with four flexible modes – tablet, stand, laptop and desktop. When connected to the optional ThinkPad Tablet Dock or USB3.0 docking station, users can add an external display, mouse, and either the compact Bluetooth keyboard or directly attach the ThinkPad 10 Ultrabook full-sized keyboard, making the transition from a highly mobile tablet to a resourceful office environment seamless.

The ThinkPad 10 comes with a digitizer pen for pinpoint accuracy and natural writing input, Windows 8.1 including 64-bit support, up to 4 GB of memory and up to 128 GB of storage. Wireless options include 3G/4G LTE to ensure access to data virtually anywhere, and up to 10 hours of battery life provides productivity throughout the day. IT managers will also appreciate VPN access control, application deployment management and can prevent users from installing prohibited apps. 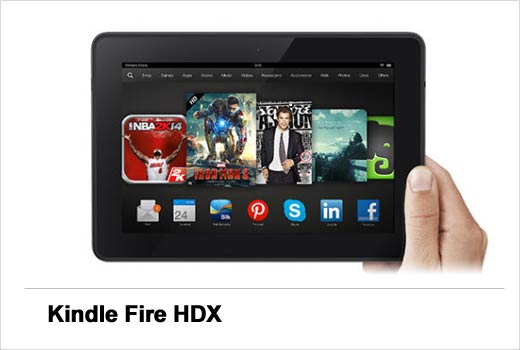 Fire OS 3.0 includes an enhanced, content-first home screen that allows users to easily switch between viewing their recent content and apps in Carousel View or favorites in Grid View. The new Quick Switch feature uses a side swipe gesture to easily move between multiple apps or individual content items without navigating home.