Can BlackBerry Fix Android for Work?

Tips for Securing Data in a Mobile World

Android has a really lousy security reputation. It is almost as if Google looked at all the grief Microsoft got in the late ‘90s with regard to not taking security seriously enough and envied that attention. This has created a significant problem in a BYOD world where a lot of the affordable tablets are Android-based. So BlackBerry, a firm with a strong security history, is partnering with Google to at least address the perception that Android is unsecure. The question is, can they address the reality, as well?

The fact of the matter is that security is about perceptions. People believed the NSA was as secure as you could get in a government agency. Then, the Snowden event happened and almost immediately the NSA and, by association, every other three-letter agency, was seen as vulnerable.

Right now, Android is perceived as vulnerable, but BlackBerry isn’t. So the association of the two brands on the Android platform should make potential buyers more comfortable with Android security.

As a side note, one of the dangers of embracing Android apps is that the perception of poor security likely moves with those apps, which is likely part of the reason BlackBerry is going through Amazon, which has a better reputation, than Google for app compatibility on BlackBerry phones.

The Reality of Android + BlackBerry

While you can’t fully address a platform or company security shortcoming through third-party offerings, you can certainly improve the security of the platform. BlackBerry is basically wrapping Android with a series of technologies that improve device management, secure messaging and other communications, and provide a separation between home and work activities.

These address a broad cross-section of concerns if used in conjunction with strong enforced security policies like blocking side loading and actively scanning for infected hardware before letting it on local networks. Certainly, messaging using BlackBerry’s tools will be more secure, but the product will likely still have to have an anti-virus offering from a security firm to allow Android to become a more trusted client in the enterprise. Fortunately, tools from companies like McAfee can provide these solutions. 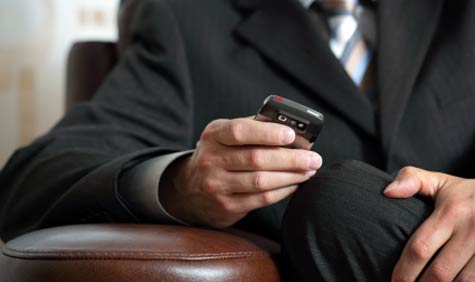 However, the long-term benefit of BlackBerry collaborating with Google on Android is the high probability that, over time, some of the security concepts and learnings will pass from BlackBerry to Google. The end result should be better practices during the development of Android, strengthening the platform further.

Wrapping Up: Making Android More Viable in the Enterprise

While this collaboration doesn’t fix Google’s security problem completely with Android, it does potentially reduce it significantly and, tied to a long-term stronger focus on security, it could turn Google and Android into a better enterprise player. For BlackBerry, this gives it increased stature, a broader reach, a showcase for its tools, and a better overall prognosis. Depending on where this goes, it potentially gives both companies additional future options.

In the end, though, if you have to use Android, it’d be wise to wrap it with BlackBerry tools and reliable security software because we live in a hostile world and you need all the security you can get.