Earlier, I wrote about how the Windows 10 Creators Update was focused on helping users create and share 3D objects, drive a new world of video game programming, and improve the speed and effectiveness of communication. I also mentioned how Microsoft is much more tightly connecting the hardware and software, and now I’ll focus on that.

What I find interesting about Surface is that when Bill Gates launched the Windows tablet a decade and a half ago, it wasn’t very successful, largely because Microsoft lost track of the goal: to create something that folks would use instead of pen and paper. That early Windows tablet sucked, not only as a tablet, but as a notebook computer.

Surface was a great laptop and it could be used effectively as a tablet. Currently, Microsoft’s premier product, the Surface Book (which I’m writing this post on) carries the highest customer satisfaction of any PC running Chrome, MacOS, iOS or Windows, according to Microsoft. People love this thing – hell, I love this thing (though I just use mine as a laptop). So this class, with Surface, went from being kind of a bad joke to being an incredible success. But users wanted more and apparently Microsoft listened.

With the Surface Book 2, Microsoft upped the battery life by a whopping 30 percent. It doubled the graphics (three times more than the currently shipping 13-inch MacBook, but it’ll likely be refreshed tomorrow). Microsoft did have to add a second fan and more batteries, so it now has 16 hours (with the base on it) of battery life. It isn’t a cheap date at $2,399.

Suddenly, I’ve been taken back to when Steve Jobs did hardware launches. This has that feel and it is nice to see that the folks at Microsoft have read “The Presentation Secrets of Steve Jobs,” by Carmine Gallo, because this is right out of that book. Product center, high drama, well executed. The Surface Studio is a brand-new product in this class and it looks like what you’d get if you addressed the faults and age of the iMac and once again focused on the users who create on this class of machine.

It has a 4.5K screen, which is really interesting because most OEMs buy panels based on price and yield. But this screen was designed to map 1-1 with Windows, which means at 100 percent, what you see is exactly what you print.

I got a chance to look at this screen from 1 inch. Even from 1 inch, the image looked like it had been laminated onto the screen. I couldn’t see the pixels. The specification that Microsoft set has an unusual amount of color vibrancy and depth as well; the result rivals an OLED screen, which is impressive for an LCD (I didn’t know you could do this). At 28 inches, this is stunning. Really, you need to see it to appreciate it. You can adjust color depth on the fly so you can match the screen to what your customer is going to see. (It’s great to have massive color depth, but this is designed for those who create for a living and they have to create for lesser screens.) 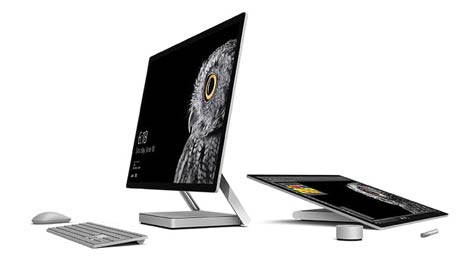 Microsoft used high-end mobile parts to create this product, which made the base very small and the screen amazingly thin. It isn’t top heavy like an iMac, or any design that puts the PC behind the screen. It folds down to a nearly flat working surface, and has high-resolution touch and pen input, something that the iMac has needed for years in order to address the needs of artists, engineers and animators. I’m told the studios that have previewed this thing have loved it.

It has a matched keyboard and mouse, and only one cable comes out of the back (if it is connected wirelessly and you don’t plug in USB 3.0 devices). It has a 2-1 speaker setup (with a light sub), an array microphone and built-in cameras for Microsoft Hello and video conferencing. Apparently, executives like this a lot because they can lose the ugly video conferencing system that many have in their offices.

They introduced a new device, a wheel, that can be used by a creator to change colors or brush width simply by placing it on the screen when it is nearly flat. The wheel will also change volume and screen brightness if left on the desk.

Pen use is improved. For instance, you can highlight (if editing) an entire paragraph just by scribbling over it, and drop notes right into the document with the pen. This isn’t cheap at just under $3K.

I have to comment on the production quality of this segment. This was well above what I typically see at Microsoft and, as noted, far more in line with an old Apple event. They even had folks primed to applaud and cheer at the right times (something that was unique to Apple), which raised the excitement and undoubtedly also significantly increased the positive coverage from the press and analysts in the room.

Wrapping Up: Focus on the People

Really, this is as much a lesson in how to present a product as it is on the new Surface products themselves. Focus not on the technology but what people can do with it, hit the design of the offering in a way that gets people excited, and make sure the design meets expectations. I think this is why the Apple Watch fell flat: Apple, whose founder created this process, forgot all that. So what made this event great wasn’t just that Microsoft created a compelling product, but that it presented it in a way that captured the imagination and created product lust. In short, the folks who designed and built the product and the folks who presented it stepped up to an unusual level of quality for Microsoft (something I’ve rarely seen outside of Apple and don’t even see at Apple that much anymore).

It strikes me that Apple presents tomorrow and that Microsoft has set an unusually high bar, as most of the reporters here are going to be at Apple tomorrow. If Apple falls short, as it did with its recent financials, I doubt these folks will be kind.

In any case, I think I’ve just seen the hardware that executives and creators are going to want shortly. If I were in IT, I’d pick up a couple of these things just so I could understand my customers’ new needs. Yes, that is exactly the only reason why I’d put one of these on my desk. Nothing to do with impressing my co-workers or satisfying the lust in my own heart. Nothing at all.