How to Be a Winner: 5 Keys to Achieving Big Goals

When conflict arises in your IT organization, chances are your first inclination is either to avoid dealing with it entirely, or to deal with it by nipping it in the bud. After all, nothing good can come of it, right?

Wrong, say management and human resources consultants Cornelia Gamlem and Barbara Mitchell, authors of “The Essential Workplace Conflict Handbook: A Quick and Handy Resource for Any Manager, Team Leader, HR Professional, Or Anyone Who Wants to Resolve Disputes and Increase Productivity.” According to Gamlem and Mitchell, when it’s managed correctly, conflict can actually be a driver of innovation and creativity in your organization.

Certain myths, Gamlem and Mitchell say, have arisen around workplace conflict that need to be debunked. One such myth is that conflict is always negative, and should be avoided at work. Quite the contrary, they say:

When problems are hidden or masked, they aren’t solved. They fester and grow into bigger problems. Conflict has to be acknowledged and addressed. A big misconception about conflict is that it’s a negative force. Workplace conflict is often creativity and innovation trying to happen, and savvy organizations look for ways to embrace and optimize conflict. Employees close to the work often have great ideas for better solutions. Help them brainstorm these ideas, and then help them evaluate and prioritize them. When people sit down and talk, calmly and rationally, information is exchanged. There is an opportunity to hear and understand different ideas and viewpoints, which lead to innovative solutions. A positive outcome of this approach is that working relationships are strengthened. Embrace the point of view that conflict is essential in the workplace if it’s part of a creative and engaged culture that wants the organization to grow and thrive.

Another myth, Gamlem and Mitchell say, is that difficult people are almost always the cause of conflict:

People’s behavior can cause difficulty, but it’s the behavior that can be the cause of problems, not the people. While bad behavior is certainly a contributing cause of conflict, it’s not the only cause. Failing to set realistic expectations is a big contributor. If people don’t understand what the organization, their manager, or their teammates expect, confusion and conflict can result. Set expectations early, beginning with the job interview and again during the first days of employment. Let people know what the job entails—its functions and tasks—and what success in the role looks like. Change in the workplace is another contributing factor. Globalization, generational differences, changing technology, new leadership, or changes in reporting relationships are just a few changes people may encounter. Change is uncomfortable for many people, but we all have a choice about how we react to change—embrace it, resist it, or wait and see. To lessen the likelihood of conflicts, change can and should be managed effectively.

Gamlem and Mitchell also challenge the notion that the problem at the root of a conflict is usually obvious:

Too often, people assume that they understand the root cause of a problem. Information is presented and it’s human nature to jump to conclusions. Problem solving is central to managing conflict, but the problem can’t be solved until it’s identified—just like a physician must diagnose an ailment before treating it. No matter with whom you are in conflict—your boss, your co-worker or teammate, your employee or peer—acknowledging and solving the problem is critical. Getting to the source involves dialogue, conversations, and some detective work. There are a number of skills and techniques that you have to employ: attending skills, which put everyone on an even level; encouraging skills, which enable others to elaborate; clarifying skills to reduce ambiguity and establish clarity; and reflecting skills that allow the opportunity to restate in your own words what you’ve heard the other person say. Get good information by varying the types of questions you ask, such as open-ended questions, closed-ended questions, fact-based questions or opinion-based questions. 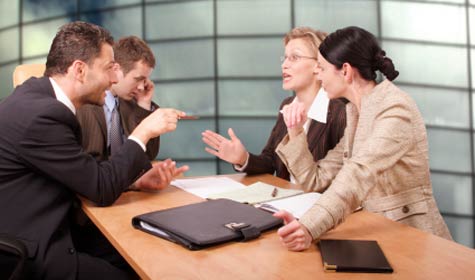 We also need to get away from the idea that in conflict, there are always winners and losers, they say:

This is true if you follow the theory of position-based bargaining, but it won’t solve the problem or resolve the conflict. A position is a stand we take in an argument, negotiation, or conflict. It is what we demand from the other person(s). Interests are what we really want—our needs, desires and concerns. When positions become the focus of the conflict, the problem can get covered up along with any useful solution. Focusing on interests, rather than positions, is much more effective. In any conflict, think about what your interest is and then separate your position from your interest. Be able to articulate your interest(s) to yourself and to others and be able to explain why it’s important to you. When you discuss them with the others, be specific and give good information. Making your interests come alive will increase the likelihood that the other side will agree that your interests are important. It will help to move the discussion away from positions. You also have to consider the other person’s perspective. Stand in their shoes and contemplate what they really want—their interests. Underlying your interests and their interests are mutual needs and values. Gaining an understanding of these mutual interests helps everyone to make informed decisions and be better equipped to create options to resolve the conflict.

Finally, Gamlem and Mitchell say, we shouldn’t assume that it’s a manager’s responsibility to intervene and fix problems on her team:

Managers often find themselves trapped in the middle of a situation involving members of their team—situations or issues that are not theirs to solve, and a typical reaction is to intervene. Unless a problem involves behavior or performance that needs to be addressed, a manager doesn’t necessarily own it—the employees do. Employees need the freedom and authority to solve problems that relate to their work. When managers intervene and exert management authority, employees miss the opportunity to develop their own conflict management skills—signaling that problem solving is always a top-down approach. If a manager intervenes, the perception could arise that the manager is taking sides by imposing a solution proposed by one party. The unintended consequence: employee de-motivation. Ultimately, some good ideas could be stifled and lost forever. A guiding principle—in fact, a golden rule—of conflict resolution is that the problem should be solved by the individuals who own it.

Previous article2016: The Year of the Software-Defined Skill Set
Next articleHow to Survive a Horror Movie (or a Day at Work) with Wi-Fi