The Sad Story of HP Printers

Many lessons can be learned from the mistakes tech companies have made over the last several decades. Microsoft Zune teaches us that it is foolish to enter a market dominated by another company if you are unwilling to spend or do the things necessary to displace that larger company. A whole host of companies have showcased that you can’t lead in both consumer and corporate technology because the efforts create internal conflicts with both the firm’s image and focus that can critically damage one or, more often both, efforts.

At HP Printers, they were fully aware back in the late 1970s that the market was moving to go paperless, but spent the following decades in denial rather than in pivoting to take advantage of the opportunities that this move would create. Recent surveys indicate that a majority of firms will be paperless shortly, yet with four decades of warning, HP doesn’t appear ready.

HP Inc.’s numbers are out and they are getting pounded by the decline in printing supplies. As a result of this long-anticipated move, they now serve as a lesson of what not to do. They also showcase why so many dominant companies, even with lots of notice, don’t survive an industry event like the paperless office. 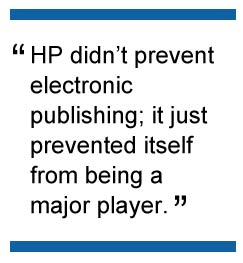 Companies have clear power structures that surround their dominant business and as long as revenues and profits remain strong, the people running the legacy business are untouchable. Company cultures, partially as part of the command-and-control structure, foster a hierarchy where these legacy mangers have advantages when it comes to financial resources and people.

We also know that the older and more powerful an employee becomes, the harder it is for them to retrain, and the less they want to retrain. You could argue that part of this is time but it is also partly how we are built. When we are younger, we seem to learn more easily and are more willing to take risks. As we age, this willingness to learn and take risks is reduced; those younger than us seem foolhardy and can seem to represent a threat.

Back when I was at Siemens, this showcased itself in the highest engineering turnaround that I’d ever seen in a company. We were turning new engineers at a whopping 200 percent per year because management wanted to run the firm as if we were living 15 years in the past; eventually, the entire division failed. In IBM, when I worked there in the 90s, we actually had a pool for how long a new executive from a younger company would last. The smart money was always on less than a year.

So while HP had eBook capability and publishing tools that could have been easily modified for this new opportunity, the folks who were driving the effort were subordinate to the folks living off printing supplies and thus seen as a threat. The projects were killed and the employees forced out. Now, instead of leading in electronic publishing, HP isn’t even listed as a major player.

I should point out that HP didn’t prevent electronic publishing; it just prevented itself from being a major player.

When an industry goes into decline, the first thing that is cut is marketing, even though pretty much every management book on this subject I’ve ever read says this is colossally stupid. My first lesson on this was IBM Mainframes in the 1980s. As the opportunity seemed to decline, even while profits remained incredibly strong, instead of reminding people how good mainframes were, IBM seemed to agree they were dead. The irony was that 10 years later, studies showcase that the client computer technology that was supposedly replacing it at the time didn’t work. Now decades later, mainframes are again one of IBM’s strongest platforms, suggesting that had they refused to give in, fought the image that the mainframe was dead, and updated it (it was out of date), IBM likely could have remained dominant for a decade or so.

We later saw BlackBerry seem to agree that what the market needed were more iPhone clones, largely abandoning its advantages to try to become another Apple and almost going under in the process. Now its strategy is again to focus on what it does best and become a better BlackBerry, not another Apple. Its current phone, the Android-based Priv, is brilliant, with most reviewers feeling that had BlackBerry done this 10 years ago, it would still be in the top three. And the fact is, it could have done something like the Priv 10 years ago.

Paper is going away but printing doesn’t have to. Paint was vulnerable to printing; products like car wraps and printed wallpaper showcase that you can often do things better and cheaper with a printed material than you can with paint, and you can also deliver far more choices. Imagine a car dealership that could wrap a car any color you wanted prior to delivery; they wouldn’t need to stock a color selection, just bunch of neutral cars and the vinyl wrap material. I’ve actually wrapped three of my cars and it has largely held up better than paint and been far cheaper.

HP came out with wraps for personal devices. The first was the HP iPod. Today, you can buy wraps for some phones and tablets, but they don’t come from HP, for the most part. The issue is that until the alternative technology becomes viable, it requires a lot of investment in operations and marketing. During that time, it is unprofitable and, given a tight focus on quarterly profits and the relative power of those running the legacy businesses, the investments simply aren’t made.

HP had groups working on a variety of alternatives like this. It even had printers and materials in market to address this segment, but lacked the investment to break out so the related revenues haven’t been able to overcome the losses in the existing core paper business.

Wrapping Up: Fixing the Problem

Clearly, when an industry pivots, it pivots on someone’s technology. When the personal music industry pivoted from Sony Walkman products to iPods, Sony had lines of digital music players but Apple took the market. When mainframes pivoted to client-server, Sun took the market. When it pivoted again to X86 servers, Dell, Intel and Microsoft were the big beneficiaries. The reason these firms, which were smaller at the time, were so much more successful was that, while they had a fraction of the resources initially of their big dominant competitors, they didn’t have the internal conflicts. Whatever they had was 100 percent focused on the new opportunity.

This suggests that if a firm doesn’t want to die on a pivot, it should always have several skunk works-like projects with independent funding looking at the alternatives, and executive support at the CEO level so the existing legacy executives can’t proactively kill the efforts. If the board and CEO agree that the company needs to pivot, then they get the required funding immediately, but they also fund an effort to slow the industry move so that the firm can hold the customers while the industry adjusts.

This was most elegantly done with the MP3 player to smartphone industry pivot. Few MP3 players are in the market today, but Apple remains dominant because it didn’t announce the death of the iPod. It fully funded its replacement and actually grew the market on the pivot and didn’t lose it.

In the current cloud services move, Microsoft appears to have made the pivot the most elegantly, emerging as a leader in the new segment while still defending its leadership in the old.  Microsoft and especially Apple are showcases that a firm can pivot successfully, while HP printers and a lot of now-dead companies like Novell, DEC and Palm are the more common example of what happens when a company can’t pivot. I respectfully suggest the former path is the better path.

Previous articleSmart Pattern Discovery: 5 Ways Retailers Can Make 2015 the Most Profitable Year Ever
Next articleBYOD for the CIO: Maximize Productivity While Maintaining Security