When it comes to building a private cloud, most IT organizations are just looking for a way to cost-effectively share access to massive amounts of unstructured data that continues grow across the enterprise. Rather than using costly network attached storage (NAS) that depends on legacy file system technology, SwiftStack has released an object-based storage system that was developed using elements of the OpenStack cloud management framework.

The SwiftStack object storage system uses the Swift storage technology that is part of OpenStack to give IT organizations a way to centralize data management. Rather than having duplicate files in multiple NAS systems, SwiftStack relies on object-storage technologies to manage access to a single copy of any piece of unstructured data.

Each SwiftStack node is deployed as a turnkey piece of storage software on top of standard, low-cost disk drives that communicate with a central SwiftStack controller, making the data broadly available. The controller is decoupled from the storage hardware, which allows the system to scale out by adding additional nodes using standard storage devices rather than relying on expensive storage systems that are tied to a controller that’s built around proprietary ASIC processor technology.

Given that large amounts of the data being managed in the enterprise are actually duplicate data, object-based storage systems have the potential to dramatically reduce the total cost of storage when deployed as part of a private cloud.

According to SwiftStack CEO Joe Arnold, the technology used by SwiftStack paves the way for bringing software-defined storage systems into the enterprise that are easier to manage, and it gives them a framework for quickly deploying a private cloud that is as cost effective as an external cloud storage provider. Add to that the governance capabilities provided by an object-based storage system and the decision to build an internal private cloud starts to look pretty compelling, says Arnold.

To make that option even more palatable, Arnold says SwiftStack just picked up an additional $6.1 million in financing, so it is pricing its software at $249 per month for every 25TB of storage used. 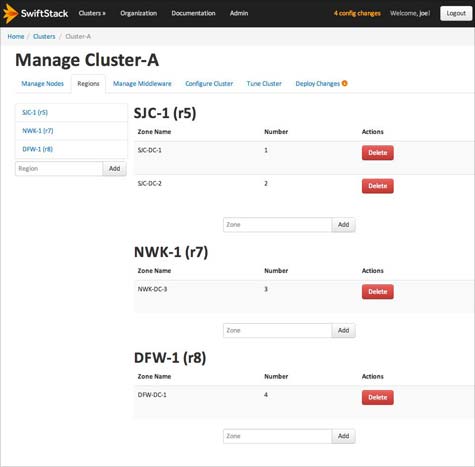 With OpenStack celebrating its third birthday, the technologies that make up the cloud management framework have been maturing rapidly. The thing that IT organizations need to remember is that while every major vendor is saluting OpenStack these days, many of them are cherry picking which components of OpenStack they want to deploy.

The Swift object storage system defined within OpenStack threatens to commoditize storage in a way that many vendors want to carefully manage over an extended period of time. Technologies such as SwiftStack, however, help control the pace at which object storage systems will ultimately replace NAS systems for managing unstructured data.