The CEO’s departure is, sooner or later, inevitable – but are companies prepared for it?

With CEOs turning over at a rate of 10 to 15 percent per year – from jumping to another firm to resigning due to poor health or poor performance, or just retiring – companies would be expected to be well-prepared for CEO succession. But governance experts from Stanford and The Miles Group have found a number of broad misunderstandings about CEO transitions and how ready the board is for this major change.

In their recent piece for the Stanford Closer Look Series, David Larcker and Brian Tayan of the Corporate Governance Research Initiative at the Stanford Graduate School of Business and Stephen Miles of The Miles Group name seven myths around CEO succession – myths shared by corporate boards as well as the larger business community.

“The selection of the CEO is the single most important decision a board of directors can make,” say the authors, but turmoil around these decisions at the top “have called into question the reliability of the process that companies use to identify and develop future leaders.” Click through for seven myths surrounding CEO succession, as identified by The Miles Group and the Stanford Graduate School of Business. 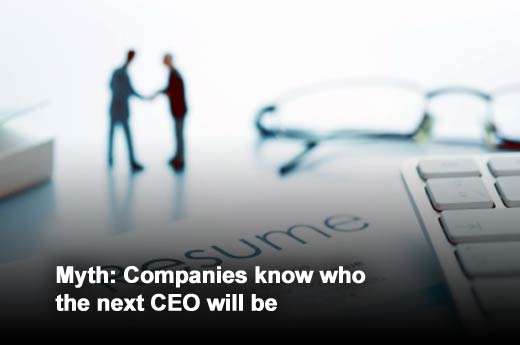 Myth #1: Companies know who the next CEO will be. “The longer the succession period from one CEO to the next, the worse the company will perform relative to its peers,” says Professor Larcker. “But, shockingly, nearly 40 percent of companies claim they have no viable internal candidate available to immediately fill the shoes of the CEO if he or she left tomorrow.” 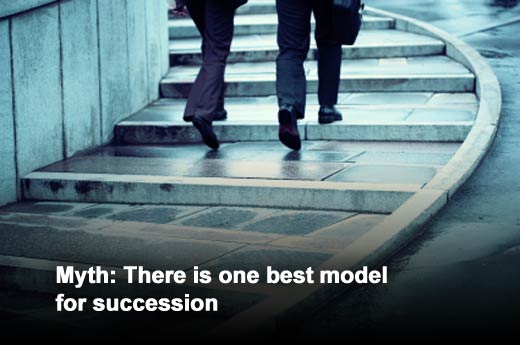 Myth #2: There is one best model for succession. “There are several different paths companies can take to naming a successor – including internal and external approaches,” says Mr. Miles. “One reason companies fall short at succession planning is that they often select the wrong model for their current situation. A company may need an external recruit to lead a turnaround, for instance, or may have the capability to groom multiple internal executives over a period of time to allow the most promising one to shine through. One size does not fit all.” Myth #3: The CEO should pick a successor. “Sitting CEOs have a vested interest in the current strategy of a company and its continuance, and they may have ‘favorites’ they want to see follow them,” says Professor Larcker. “Boards, however, must determine the future needs of the company, and what kind of successor will best match the direction the company is headed.” 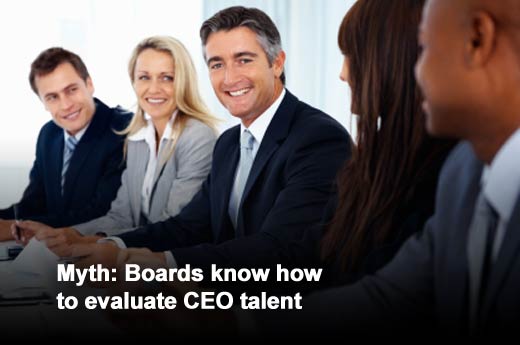 Myth #5: Boards know how to evaluate CEO talent. “Our 2013 survey found that CEO performance evaluations place considerable weight on financial performance (such as accounting, operating, and stock price results) and not enough weight on the nonfinancial metrics (such as employee satisfaction, customer service, innovation, and talent development) that have proven correlation with the long-term success of organizations,” says Professor Larcker. Myth #6: Boards prefer internal candidates. “While, ultimately, three-quarters of newly appointed CEOs are internal executives, external candidates still hold a strong appeal for boards – especially at the start of a search,” says Mr. Miles. “Often boards aren’t given enough exposure to internal candidates, and directors are often nervous about giving an ‘untested’ executive the full reins of a company. There is a still-prevalent bias against promoting the insider ‘junior executive’ to the top spot one day. So, while the ‘myth’ may end up mostly true in the end, there is often a long journey of getting the board to that decision.” Myth #7: Boards want a female or minority CEO. “The numbers speak for themselves,” says Professor Larcker. “‘Diversity’ ranks high on the list of attributes that board members formally look for in CEO candidates, and yet female and ethnic minorities continue to have low representation among actual CEOs. We continue to see that boards select CEOs with leadership styles they perceive to be similar to their own, and the fact is that boards today are still highly non-diverse when it comes to gender and ethnic backgrounds.”