It’s interesting that, in many ways, Android represented an incomplete version of Microsoft’s Embrace, Extend, and Extinguish strategy, used so successfully against Lotus in the 1980s. It came in as a virtual copy of iOS and did Apple a lot of damage. But, as with all things, Google seemed to lose interest and momentum. Now, iOS arguably, from the standpoint of profit generation, remains stronger than Android today.

Last week, Steve Ballmer, Microsoft’s ex-CEO, suggested that Microsoft do something similar with Android apps on Windows Phone. Since Microsoft created this strategy and also defended most successfully against it, there is likely no other company, other than a more focused Google staffed by ex-Microsoft folks, that could do it better. 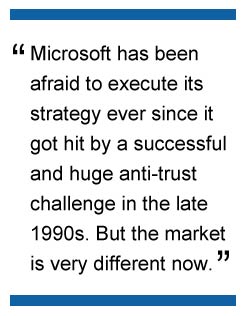 I’ve been thinking about this over the weekend and I realized that one of the curiosities of the last couple of decades is that Microsoft has been afraid to execute its strategy ever since it got hit by a successful and huge anti-trust challenge in the late 1990s. But the market is very different now. Google, not Microsoft, is the big scary company on the block. Maybe Ballmer is right and it is time to dust off that old strategy and bring it back into play.

My top current example is the Blackberry PRIV.

I’ve been using the BlackBerry PRIV for around a month now and it is by far my favorite phone. It runs all the Android apps, it is relatively secure, and it has the keyboard that I used to think I couldn’t live without. While it isn’t as secure as a BB10 device nor does it have the most compelling BB10 feature yet, Blend, it arguably is the most secure Android device and it works brilliantly.

Now, BlackBerry makes money off phones and its mobile management and security solutions for business. It never really made money off of its old operating system and its new OS, QNX, really should be focused on its big industrial markets and the Internet of Things. By using Android, it gave up about 10 percent of what folks really cared about on its platform and got 100 percent of what folks wanted in a personal phone.

Suddenly, it has a phone that is attractive to the kind of audience it used to serve. I believe, had it done this five years ago, its market share would be far higher and this device would be even better.

So the PRIV showcases the value of what Ballmer suggested. However, unlike BlackBerry, Microsoft is in the tools and platform business and while it too makes management platforms, it does care who owns the developers. So it can’t just license Android; it has to come up with a strategy that gets the developers, too.

This is exactly what Microsoft did with Lotus. The company basically reverse engineered Lotus 1-2-3 so that scripts, basically the apps of the day, would run on Exchange. This was the embrace phase. Then, it not only increased Exchange functionality, it wrapped it with Office. This was the extend phase. Then it aggressively marketed the result so that Lotus 1-2-3 and its late competitive response to Office, Symphony, were driven out of the market. And that is the extinguish phase.

As a result, today, Office is still dominant and, while Microsoft is being undercut in some areas by Google Docs, for the most part, it continues to successfully defend its market even though Google Docs is demonstrating the embrace phase of the strategy against Office.

Google’s variant of Embrace, Extend, and Extinguish is Clone, Eliminate Revenue, and Extinguish. So far, it has demonstrated that it can do the first, is partially successful on the second, and is woefully inadequate on the third. For most firms, the Google strategy would be economically non-viable or result in an anti-trust charge of predatory pricing. (I’m really kind of surprised that hasn’t happened here.)

IBM tried a blend of Microsoft’s and Google’s strategy with OS/2. It had full Windows compatibility but couldn’t get to a critical mass of sales because, as a hardware OEM, it couldn’t get the other OEMs to trust it. The company then tried giving the operating system away for free, even putting it in boxes of cereal at one point, but that was unsustainable (partially because IBM had to pay Microsoft a royalty for each product delivered). So IBM was unable to pivot the market to OS/2, Microsoft held on, Windows remains one of Microsoft’s most powerful platforms, and OS/2 is gone.

The New Problem with This Strategy

Given how much Android infringes on Microsoft’s and Apple’s intellectual property (Microsoft and Apple are heavily cross-licensed), creating an effective clone of the product shouldn’t be difficult and the act would be defensible. Microsoft is already offering a fast path for Android developers to port their apps to Windows today; making it seamless would be a relatively minor change and given that the developers are writing for Android first regardless, this extra porting step should be avoidable with little risk.

But that just gets you to the embrace stage. You still have to do the “extend and extinguish” parts. Google wraps Android with a lot of stuff already: all the Play services, the apps, etc. And, for extinguish, you don’t have price as a tool because Google gives Android away for free (which is problematic long term for Microsoft since there is more of a sales model). It would become another Bing-like, incredibly costly effort, with financial success seemingly impossible, regardless of the outcome.

Interestingly, Microsoft’s existing strategy of linking all of its platforms together into one experience could work, though it would have to find another lower-cost way to TVs. Right now, Xboxes are priced well above the current set-top box market. But even here, Google is already in the hunt.

Given that the softness in tablets, PCs and Google smartphones indicates the market is due for a pivot to something new, perhaps the final move would be, much like it did with PCs in the 1980s, to drive that pivot and use Microsoft’s acquired familiarity with the Android platform to pivot the developers with it.

Wrapping Up: How Microsoft Should Proceed

The difference in risk between what Ballmer is suggesting and what Microsoft is already doing with regard to providing a fast developer migration path should be negligible, but the difference to the user would be, as the BlackBerry PRIV showcases, dramatic. The key is to have that be the opening salvo in a strategy to pivot the market so that at the end of the pivot, the developers were loyal to Microsoft, not Google. Then, given that Google is where it is because Microsoft didn’t take care of these developers adequately, Microsoft would put in place an analytics system much like EMC has to ensure developer loyalty so someone else couldn’t do the same thing to the firm again a few years later.