If you’ve ever been scheduled to give a presentation at work, and called in sick just so you could get out of it, take heart—you’re not alone. But be advised: If you don’t conquer your fear and develop your presentation skills, you can expect your career prospects to suffer.

Those are a couple of the factoids that emerged from a recent survey commissioned by Prezi, a cloud-based presentation platform, in collaboration with Carmine Gallo, a former broadcast journalist who now is widely known as a presentation coach and speaker. To put some numbers to those factoids, 12 percent of women, and 7 percent of men, would pretend to be sick in order to get out of making a presentation; 70 percent of those surveyed said presentations are critical to their career success.

I recently discussed the findings of the survey with Prezi co-founder and CEO Peter Arvai. In case you’ve never used Prezi, I can tell you it’s radically different from PowerPoint. Instead of being slide-based, it allows you to create the entire presentation on a single canvas, and zoom in and out to highlight the various visual components. So I asked Arvai in what ways the findings of the survey reinforced his sense that he’s on the right track with what he’s doing at Prezi. He said it helped to crystallize the fact that the current way we present to each other is broken:

There’s a real tension here. On the one hand, the stakes are increasing—presentations are more and more important for our careers. On the other hand, the tools and the approaches we use are broken. The most important thing that we learned from the survey was that presentations, and their ability to have an impact, matter a lot. If there is a way to help people become more effective presenters, that creates a lot of business value. The survey helps to quantify the intangible value that is being generated when a presenter is effective. What we know about Prezi is that people say they choose Prezi because it enables them to convey their message in a way that helps the audience to understand and retain the information better. We’ve found that companies accomplish up to a 30 percent higher close rate [closing a deal, for example] when they switch from slides to Prezi. So we think that successful Prezi users are able to connect more deeply with their messages. That has essentially been the driving thesis for developing Prezi as a product.

I asked Arvai if the findings of the survey had any impact on anything he’s doing strategically or tactically at Prezi. He said the company has an even more determined focus on what a presenter can provide to an audience that engages it on a deeper level:

What we know, for example, is the fact that if you can remind people of the context in which an idea fits, that is a very useful tool for people to remind the audience how the ideas connect. So the ability to zoom out, and show the big picture of the entire story arc, and the ability to drill in deeply on a detail, is something we believe helps people understand and retain information better. We want to see how we can build more aspects of this into the product experience.

So did any of the findings of the survey surprise him at all? Arvai said he was surprised by the degree to which being a skilled presenter is seen as being key to professional success:

I always had a gut instinct around there being a clear connection between a great presenter, and being a success at work. But I was surprised how clear this was made by the numbers, and how conscious people seem to be about this.

I also had the opportunity to speak with Gallo, and I asked him the same question—whether any of the findings surprised him. He said he was surprised that so many people would do almost anything to avoid giving a presentation, even if it means having less of a reputation in their workplace by handing it off to somebody else:

Twenty percent of employees will find almost any excuse to avoid giving a presentation, to include calling in sick. That’s just another indication of how anxiety-provoking it is for people to give presentations, and that’s too bad. I talk to a lot of executives in technology companies, and you’re really only as successful as your ideas. It’s an information age; it’s a knowledge economy; the ability to persuasively connect your ideas and the work you’re doing to the bigger picture is critical in enabling you to stand out from all the noise, especially in IT departments in large companies. Unfortunately, a lot of people don’t really look at their presentation skills too critically, or they just try to avoid it. I’m starting to sense that people will just not take the opportunity to deliver more presentations, and that hurts them in their career, big time. 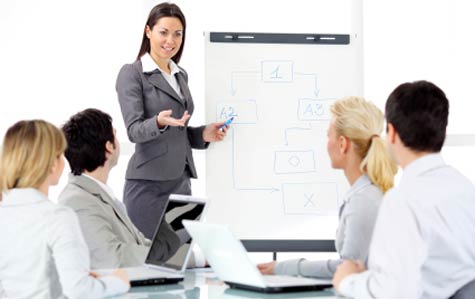 Gallo went on to comment on the fact that 70 percent of those surveyed said presentations are critical to their career success:

What I told Prezi was, the other 30 percent who did not think it’s critical to their success, they just don’t know it yet. I can give you an example. I’m not going to mention the name of the company, but it’s a very large technology company that all of your readers would know—it’s one of the largest technology companies in the world. I know for a fact that it is very difficult to advance beyond a certain stage in management if you are not rated highly on your presentation skills. It’s all about how to communicate your ideas clearly. If you’re boring and long and convoluted, that’s trouble.

Gallo wrote a piece on Forbes.com last month, titled, “One Simple Rule That Makes Apple Presentations ‘Apple-Esque.’” I asked him if he could draw any connection between the survey findings and the message about engaging the audience that he conveyed in that piece. He said he definitely could:

This was another thing that jumped out at me. Sixty-two percent of the people surveyed admit to being distracted during presentations. People are texting, checking their email, posting on social media—I see that all the time in business presentations. You look at the audience, and instead of being mesmerized and glued to a presentation, they’re doing pretty much everything else. What you need to do is engage the audience through your presentation. If you think about it, the Apple [iPhone 6 announcement] presentation was two hours, and it was pretty mesmerizing, because they do a couple of tricks. I know this for a fact, because I have worked with designers who have worked with Apple, so I’m sort of one degree of separation. They do a couple of interesting presentation tricks that you can do, regardless of the [presentation] software that you use. They break it up. They create what are called “soft breaks.” Let’s say you’re an IT professional, and you have some type of training presentation that you have to deliver. It’s important to break up your presentation into 10-minute chunks, and there’s science behind this. People will start to lose their attention within about 10 minutes. If you go back to the Apple presentation, you will see that there’s not one speaker who is just speaking and delivering slides for more than 10 minutes at a time—not even close. They have multiple speakers; they have videos; they have demonstrations. They keep it moving—they break it up. Yet what do most people do in every meeting room across America? They come in with a PowerPoint deck that’s got 100 slides, and 45 minutes later, the audience is ready to shoot themselves. So it’s not surprising that 62 percent admit to being distracted—of course they are.