Boo! Yes, it’s that time of year again — time for scary movies, haunted houses, ghouls and goblins and little trick-or-treaters stopping by for candy. While many of these activities are traditions near and dear to our hearts, tech experts have been working hard to soup up the fright factor at many of the country’s best haunted attractions.

Haunted house owners and operators have created attractions that are so detailed they remove you from the realm of reality and plunge you into a haunted world you never knew you could experience. Larry Kirchner, owner of HauntWorld, has provided a list of the 13 techiest haunted houses, so enthusiasts can enjoy the most advanced and spookiest houses in the nation.

HauntWorld is a leading resource in the Halloween industry and connects over 10 million people each year with haunted attractions and Halloween activities in their local areas. The site provides insider access into the world of haunted houses and attractions, as well as Halloween news, information and tips. Readers can find information regarding the top haunts around the country and internationally, Halloween vendors, manufacturers, events, tips and forums. Click through for the top 13 techiest (and creepiest) haunted houses in the U.S for 2014, as identified by HauntWorld. The Asylum is a hospital-themed walk-through haunted attraction with high-tech animatronics, seasoned actors, and digital sound that’s guaranteed to scare. Wind through the labyrinth of old cells and dank damp halls and see the human experimentation that went wrong in The Dungeon of Lost Souls. Details and special effects add to the incredible illusions that will leave you repulsed and in awe.

The Tunnel Terror, located underneath the grounds of the facility originally named Pennhurst Home for the Feeble Minded and Epileptic, is a 900-foot-long gauntlet filled with catacombs, swamps and monsters. The fourth attraction, Ghost Hunt, is a self-guided tour of the Mayflower Dormitory, reportedly the most active building for paranormal investigations. Featured on Ghost Adventures and Ghost Hunters, only the most courageous enter, only the living are allowed to leave. 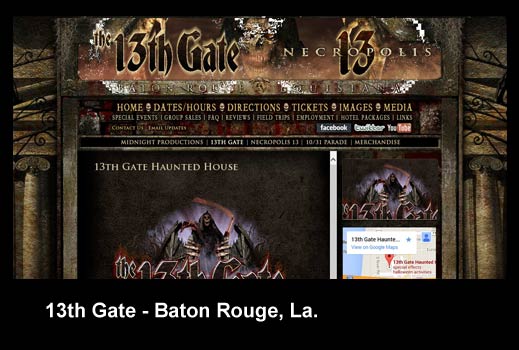 The owners of the 13th Gate have taken advantage of the booming film industry in Louisiana, recruiting the top special effects artists around, and in turn, creating one of the most realistically themed haunted houses in the country. This extreme detail includes amazing movie-quality set design, animations and special FX with over-the-top makeup artists and over 200 professional actors. The attraction features a 30-minute walk through 13 differently themed areas, from the fog-filled streets of London to the lost underwater city of Atlantis, and a claustrophobic cave system infested with hundreds of live snakes. If that wasn’t enough, next door is the sister attraction, Necropolis 13. Necropolis is an outdoor replica of a New Orleans Cemetery featuring a 40,000 sq. ft. labyrinth of over 400 zombie-infested crypts, underground catacombs, and a nightly voodoo fire show that literally will have the dead crawling right out of the ground in front of you. 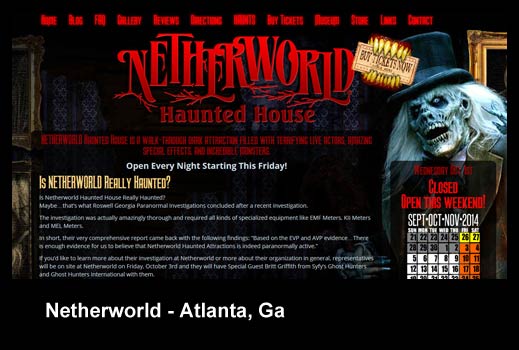 Netherworld Haunted House is known for its over-the-top special effects, intense makeup, elaborate costuming, skilled stunt actors, unique monsters, unusual themes and chilling detail. To put it simply, Netherworld is the total package – an extremely high-quality immersive event that merges scary, fun and cool into a safe environment. More importantly, Netherworld is ever changing – coming up with new effects, scares, characters and storylines every Halloween season, while still retaining the Halloween feel that brings back guests year after year. In 2014, Netherworld is presenting Season Of The Witch, a classic extremely scary haunt brimming with the supernatural, and Spliced, a science fiction/medical gory mash-up with tons of unique monsters! The scare specialists at House of Torment – Austin’s oldest and most spine-tingling haunted house – are launching an all-out horror assault on Central Texas as they open up for their most hair-raising year yet. Continually recognized as one of America’s top haunts, House of Torment is striking fear into the hearts, minds and guts of those brave enough to face the gore. Fear fans will meet their match with the new storylines and unimaginable monstrosities that await them at three separate haunts: Blackthorne District: Realms Collide, Cursed: The Coven, and Slaughterhouse: The Feeding. 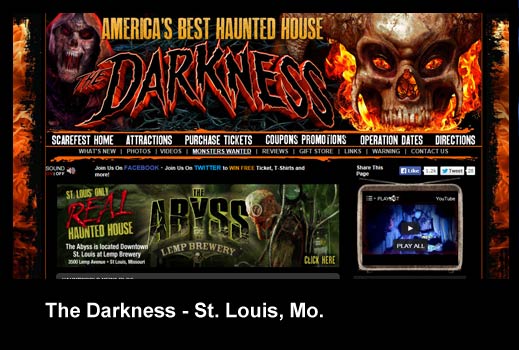 The Darkness is considered by many the single best haunted house in the entire haunt industry because of its amazing set design, detail, and over-the-top animations. One of the things HauntWorld can say without a doubt is that Darkness has the best 3D haunted house in America, called Terror Visions. The Darkness has three attractions in one location for one price, including the two floors of Darkness, Terror Visions in 3D and the Monster Museum. Each year, The Darkness is renovated to open in March during the annual Transworld Haunted House Tradeshow. The one thing that makes Darkness different is over-the-top massive effects, which scare large groups at one time, such as the falling barrel wall, moving swamp house and many more. The Darkness is totally renovated each year with new animations, computer animations, sets and more. Erebus is a four-story haunted house located in Pontiac, Mich. and was entered into the Guinness Book of World Records as the World’s Largest Walk-Through Haunted Attraction from Aug. 2005 – Sept. 2009.  Erebus is the result of Dr. Colber, who worked for the government to build a time machine, which he completed on his own after leaving their employ. The project was successful at sending people back in time, but it had a major glitch – the time period looked at the people as a virus and wiped them out. Determined to overcome this glitch, he sent in group after group of his own personnel. Unsuccessful, he ended up broke and lacking the proper personnel to run his machine. Dr. Colber came up with a brilliant idea to disguise his time machine as a haunted house and have the general public help fund his project by being human guinea pigs. 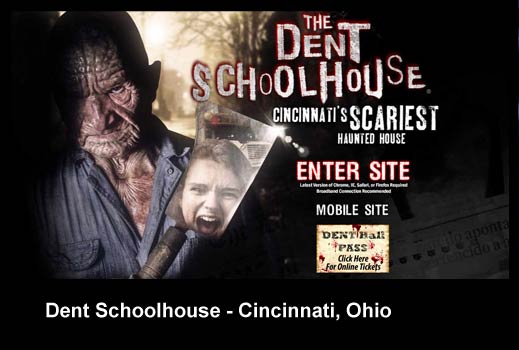 The Dent Schoolhouse is one of the most tightly themed and detailed attractions in the U.S. The theme revolves around the legend of a murderous janitor who started killing students in the 1950s. Going through The Dent Schoolhouse is like reliving a horror movie. New for 2014: a body-filled cafeteria, an auditorium that is frozen in time with a live prom dance, life-size dolls have taken over the school’s nursery, the boy’s shower is molding over and the water won’t stop running, wind through the cafeteria line to grab something rotten, and see the ghosts of Dent pass on monitors in the A/V storage of Dent. Also, every ticket includes the Queen City Slaughter Yard. This open-air attraction has been fully renovated for 2014. Originally a Christmas tree farm, Spookywoods offers guests a multi-feature haunted attraction that is certain to scare the most stoic guests. Scares lurk around every corner from the moment customers arrive. The property offers two year-round attractions: Kersey Valley Zipline and Kersey Valley Laser Tag. Treasure hunt through the amazing corn maze, ride the cow train, jump on the giant jumping pillows, pick out the perfect pumpkin, and take home a bag of kettle corn. What’s the next big thing? 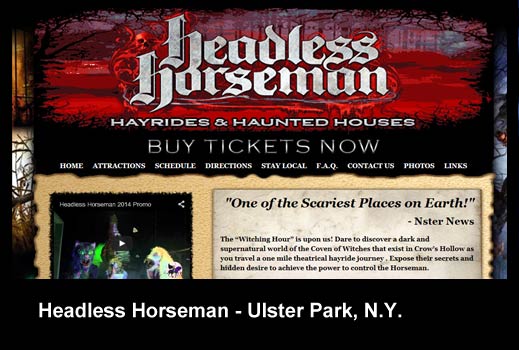 Headless Horseman Hayrides and Haunted Houses gallops into its 22nd year with 10 attractions, presenting The Witching Hour for the 2014 season. Dare to discover a dark and supernatural world of the Coven of Witches that exists in Crow Hollow as you travel a one-mile theatrical hayride journey. Expose their secrets and hidden desire to achieve the power to control the horseman. Additional attractions include: Lunar Motel, Glutton’s Diner and Slaughter House, Slither’s Pet Shop, Dr. Dark’s Side Show, Dark Harvest Corn Maze, Night Shade Greenhouse, The Feeding, Dahlia Blood’s Manor and Illusion and Magic Stage Show. This attraction is designed and built by professionals from the lighting, costume, sound, set design, special effects and make-up industries. They employ over 350 actors and staff trained to provide a memorable and enjoyable evening for the whole family. 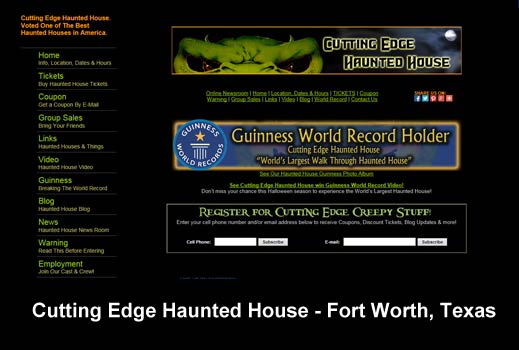 Located outside of Philadelphia Pa., the Bates Motel and Haunted Hayride is entering its 24th season and includes three major attractions. The Haunted Hayride is a heart-pounding ride through the dark forest of Arasapha Farm, and is filled with huge, detailed sets, giant monsters and more pyrotechnics than a rock concert. With new sets, and a new digital soundtrack, the Hayride is better than ever. The Haunted Corn Trail is a terrifying walk through a tall corn field that’s filled with buildings, detailed sets, tons of animatronic monsters and over 30 actors in full makeup and custom costumes. The cornerstone of this attraction is the Bates Motel, a huge, Victorian mansion that is filled with amazing detail, 25 seasoned actors and unexpected scares. The realism in the Bates Motel is astonishing, and is guaranteed to wow even the most discriminating haunted house enthusiast. 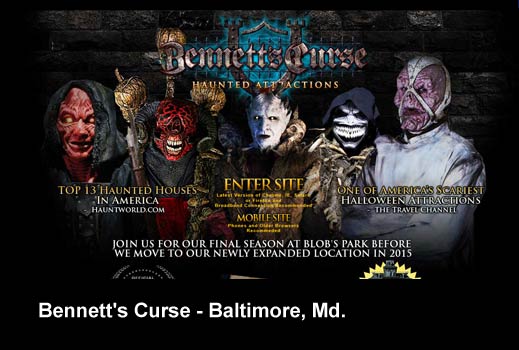 What makes Bennett’s Curse stand out amongst the top Halloween attractions in America is its dedication to creating a totally immersive environment for its guests. No other haunted attraction in America can match Bennett’s Curse’s reputation for creating innovative themes and painstaking execution. While other attractions are content to follow current trends, Bennett’s Curse is a trendsetter that raises the bar and sets the pace of offering premium terror for a new and demanding generation of thrill seekers. Bennett’s Curse will deliver three shows, the likes of which you will not experience anywhere else. In a city that sets the bar high for its entertainment options, the 13th Floor doesn’t disappoint as it sets a new benchmark for haunted houses in the Chicago area. The two haunted houses at the 13th Floor Chicago are built on a scale like no other, and from a designer’s perspective are drop-dead gorgeous and awe inspiring. From the architectural detail on the massive facades to the thoughtful set pieces in every room, it’s easy to tell that the scenic work was executed by veteran set dressers and designers from Hollywood and New York sound stages. It’s easy to tell the depth of engineering and design that went into the construction of the massive environments. The lighting and sound design is spot on, creating a space where the detail of the setting can be appreciated, where the mood is properly set, but the stars of the show are the performers that interact with and scare you. They reach, grab, slide, vault, and drop in impressive performance sequences and stunts.

Previous articleSAP to Bring Containers to HANA
Next articleNetworking: United We Fall, Divided We Stand