The challenge with Big Data is not so much the amount of data involved as much as its variety. Not only do organizations need to compare multiple sources of Big Data, it seems like there’s no end to the types of Big Data formats that business users need to synthesize.

Rising to that challenge, this week Pentaho released version 5.0 of its namesake business intelligence application, which takes advantage of the company’s data integration technology, including REST application programming interfaces, to allow users to more easily blend multiple types of Big Data formats into a single report.

While Pentaho has previously made this capability available to developers, Jake Cornelius, vice president of products, says Pentaho 5.0 represents the first time that users of BI application can blend various sources of Big Data to create custom BI reports in real time. That’s significant, says Cornelius, because the types of Big Data formats that end users want to incorporate continues to expand as more users become aware of the multitude of Big Data sources available.

In fact, just this week Pentaho inked an alliance with MongoDB under which the documents stored in the company’s NoSQL database can now become yet another source of data for users of the Pentaho BI application. 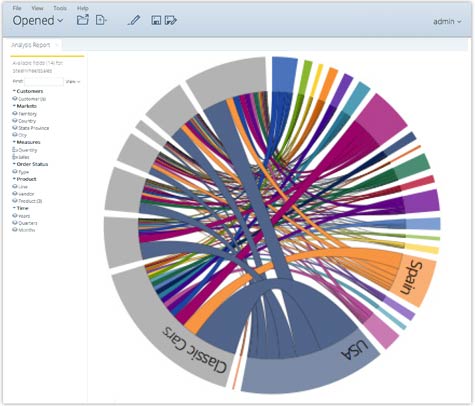 The biggest issue most end users have with BI is that it takes too much intervention from the IT department to get to the data they want. The future of BI is all about getting IT out of the way of the analysis by giving end users more control over how they interact with data. With the rise of Big Data, of course, that’s only about to get more complicated. But while IT may be in charge of governing who gets to use that data under what specific circumstances, it doesn’t mean IT needs to manage every little query against that data.