Notice to IT Pros: You’re Being Judged on Your Presentation Skills

Here’s an irony for you: IT professionals, who are at the forefront of championing advances in the application of technology in any number of pursuits, are decidedly old-school when it comes to the way they present information about the technology they’re so keen to champion.

That realization hit me during a fascinating discussion I recently had with Carmine Gallo, a former broadcast journalist who is now a world-renowned communication coach and speaker. Gallo is a goldmine of information on presentation skills, so I opened the conversation by asking him if he had any sense of where IT professionals rate on the presentation competency scale. He said you can look at that in a number of ways:

I have worked with a number of CIOs at some of the largest companies in America, and actually in the world, so I’m pretty familiar with the audience. I’d say the majority of technologists and IT professionals are still delivering presentations in what I would call an “old-school” way of presenting, which is text, bullets; headline, bullets; headline, bullets, chart; headline, bullets. Is it any surprise that we call it, “death by PowerPoint?” When you present, you’re being compared to a TED Talk, which is why I wrote the book, “Talk Like TED.” It’s a completely different way of presenting information. You’re being compared to Steve Jobs. If you watch any Apple presentation—if you watched the presentation from the iPhone 6 release, it is unlike a traditional, stale, text-heavy presentation. So when you walk in, and you’ve got the old-school presentation style that was popular 10 years ago, it’s dry.

Gallo went on to explain that most presentations are far too long:

The human mind gets distracted after about 10 minutes, and 18 minutes is the maximum amount of time that TED will allow. You can be Bill Gates, [Facebook COO] Sheryl Sandberg, Bono, or any of the other influencers who have spoken at TED—18 minutes is all you get. They’ve actually found that 18 minutes is the ideal length of time to deliver substantive information without putting your audience to sleep. What’s interesting, if you start looking back in history, one of the greatest commencement speeches of all time was the one delivered by Steve Jobs at Stanford—that was 15 minutes. Martin Luther King’s [“I have a dream”] speech was about 17 minutes. John F. Kennedy’s [“Ask not what your country can do for you”] speech was under 18 minutes. So if you can’t deliver your IT message in under 18 minutes, I think you’re speaking too long—I think you need to edit.

Gallo’s advice for IT professionals to improve their presentation skills is to learn from the best:

YouTube is a powerful tool these days—for the first time in history, we can actually watch great presentations from the best leaders and the most dynamic communicators. Every Steve Jobs presentation since 1984 is on YouTube. If you watch the Steve Jobs presentation when he introduced the iPhone in 2007, you’ll never go back to doing a plain old presentation again. Then there are the TED Talks—TED Talks are viewed two million times a day. So you have this incredible opportunity to just go on YouTube, and in a few minutes, watch some of the great presenters of our time. There are a lot of technologists who have given fantastic TED Talks, where they take data, and they really make it come alive. Sheryl Sandberg gave one of the most popular TED Talks of all time, and launched an entire movement called “Lean In”—that started from a TED Talk. So there’s a lot we can learn from watching the best, and YouTube is a great resource for that. 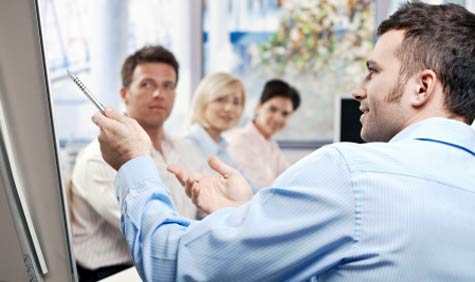 Another piece of advice that Gallo shared is to tell stories around the data:

It’s not just about the data—it’s the stories that the data tell. There’s a woman who gave a very popular TED Talk—her name is Brené Brown. She said, “Stories are just data with a soul.” So how do you put a soul into data? Let me give you an example. Bono, the U2 rock singer, delivered a TED Talk, and he presented a lot of data about poverty in third-world countries, and how far we’ve come in reducing poverty. What he did is a great template that I would recommend to all IT professionals: Make the data emotional—make it come alive. He used Prezi to present the data, zooming in and out of charts, which makes it interesting, and then he put a face on the data with a picture—he personalized it. It’s data personalization—it’s a great template.

A third key piece of advice, Gallo said, is to ensure that the presentation is visually engaging:

I understand we live in a PowerPoint world, but regardless of the tool, think about how you present it visually—how you can bring the text and the numbers to life. There’s a science behind this—it’s called “picture superiority.” It simply means that when you deliver information verbally, without any multimedia accompaniment, people remember about 10 percent of what you tell them. Add a picture or an image, and retention soars to 65 percent. I understand it’s really hard to blow up an entire culture—I get that. So take baby steps—try to bring the data to life in a more visually engaging way. It’ll be much more memorable.

Gallo wrapped up the conversation by stressing that IT professionals need to understand that they’re being judged on their presentation skills:

A gentleman in mid-level management at a large tech company contacted me earlier this year, and said that he had been working on doing more and better presentations over the last two years, and had been trying to do the things we’ve been talking about to bring the technology alive. He said that over those two years, what he had noticed was that in his company, which has 80,000 employees, he had started to stand out in a big way. Now, the company’s offices all over the world are bringing him in to pitch big clients—he said career-wise, it’s huge for him. He’s the same guy. The only difference is, people are recognizing him as a person who can deliver a really powerful presentation.