For Your Holiday Reading List: ‘Geeks, Mush Heads and the IT Revolution’

If you’re looking for a good book to read over the holidays, here’s one you might want to check out: “Geeks, Mush Heads and the IT Revolution: How SRA International Achieved Success over Nearly Four Decades.” If you think the title of the book is compelling, you should speak with its author.

The author is Ernst Volgenau, founder and chairman of Fairfax, Va.-based SRA International, a large IT services contractor to the federal government that’s been around since 1978. I had the opportunity to engage with Volgenau in a recent email interview, and I asked him to encapsulate the significance of the “IT revolution” he writes about in the book, in terms of it serving as the stage upon which his leadership story played out. He offered an interesting perspective:

Information technology has been growing since modern humans moved out of Africa 60,000 years ago. In the first half of the 20th century, there were many mechanical computers used in banking, business, the military, and government; however, World War II substantially accelerated the process because of the improvements in electronics, and it was then that the first digital computers were developed. During the Cold War the U.S. developed integrated circuits for Minuteman intercontinental ballistic missiles and other weapons. These circuits were quickly adopted commercially by companies. As a young man in those days, I could see what was happening, and therefore studied electrical engineering, focusing particularly on computers and automation. At the time, the steadily growing area of information technology became a revolution which continues to this day. The primary lesson I learned from this experience is that people have an insatiable demand for information, and the IT revolution will continue for as long as anyone can predict. It is a great market in which to be involved. 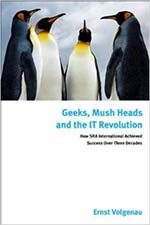 One of Volgenau’s leadership lessons is to “be vigilant because, sooner or later, a crook will join your team.” I asked him if that meant he had experienced that at SRA, and how he handled it. Without getting into details, he said naiveté had been an issue at SRA:

Companies have always been targets for criminals. Historically, accounting departments are the biggest targets, because they pay the corporate bills. More recently, information technology departments are being attacked, because the information they store (employee records, company secrets, etc.) is marketable to other criminals. Our problem occurred many years ago because we were too trusting and naïve. Since then we have developed proper safeguards.

In 2011, after experiencing what SRA describes as “some transition problems,” the company, which had been publicly traded, was privatized. Volgenau, who had been CEO for 27 years, turned the CEO reins over to William Ballhaus, who had been president and CEO of DynCorp International. I asked Volgenau, who stayed on as chairman, how difficult it was for him to let go of the CEO reins after founding the company and serving as CEO for nearly three decades. He said the timing was right:

After many years, I gave up the CEO position without regret. Almost all of my estate is going to charity, and I needed to get on with my charitable activities so that the money would be well spent. I had heard that a frequent problem with long-time founders is that they are tempted to remain involved in the details of management, and undercut the authority of their successors. I was therefore determined not to do this; however in retrospect, there were times when I could have intervened and avoided problems.

I mentioned to Volgenau that I had noticed on SRA’s website that the company’s top nine executives are all white men, except for one white woman, and that all four of its board members are white men. I asked him if that matters. He said the company is aware of the need for improvement in that area:

When SRA was a publicly listed firm prior to 2011, we had a board of nine people, which included one woman and one African-American man. Several women and African-Americans have been on the senior executive team. After we were purchased by a private equity firm, it was agreed that the board would be reduced to four people.  Two would be appointed by the private equity firm, and the two others would be the chairman and CEO. For about two years, one of the board members was a woman. However, she retired and was replaced by a man. We are aware of the need to improve our diversity on the board and throughout SRA.

I noted that it was clear to me from reading about Volgenau that in his view, business success is all about the people, so I asked him for his views on the value of gender and racial diversity in that context. His response:

We agree that is it important to improve diversity ratios; however, the fact is that the supply of qualified women and minorities in the group of people which we need to recruit is too small, as stated often in issues surrounding the subject of scientific, technical, engineering and math (STEM). SRA has supported STEM initiatives in schools for years to encourage diverse participation.

On the topic of leadership lessons, I asked Volgenau what leadership lesson IT leaders in particular have most consistently failed to learn. He said IT entrepreneurs seem to be overly preoccupied with technology, while ignoring other important aspects of building a company:

My perspective is primarily that of selling services (as opposed to products). However, there was a time that our company unsuccessfully attempted to sell products as well. Our technology was good, but our sales were not because we did not understand the market and failed to hire people who did. Media accounts which discuss the technology overly simplify the challenges of launching a successful company. The issues are far more complex than finding the next great app.

I wrapped up the conversation by asking Volgenau what makes SRA unique. He said the simple answer is the company’s business ethic, which is all about honesty and service:

During the first year of our existence, I gathered our key people for a discussion of our hopes for the company. It may be surprising to some that making a lot of money was not high on the list. We all wanted to be ethical, serve our customers well, take care of our people, and contribute to our country and world society. Therefore, I settled on the motto of “Honesty and Service,” and insisted that all present and future employees subscribe to it. Business success was a separate objective; however, we were somewhat surprised to learn that our idealism was probably the most important factor in our subsequent business success. Many of the most capable candidates wanted to work for a company that stands for something. These high performers led the company to success.