Most first-generation wearable technologies are functional but far from highly fashionable. You will find them on the bodies of those who love to adopt the latest and greatest fitness gadgets and those dedicated geeks who regularly put form above fashion.

Wearables may have begun with Google Glass, FitBit, Nike+ Fuel Band and the like, but the future is wide open. Gartner predicts that wearable electronic fitness device sales will grow to 68.1 million units in the next year. But for that to happen, it would seem that the designs might need to change to meet the needs and tastes of the users. Tech companies and fashion designers both seem to agree that the wearables of tomorrow will likely be fashion that incorporates technology instead of the other way around.

Designers who’ve already jumped at the chance to assist in creating wearable tech 2.0 include Diane Von Furstenberg, Tory Burch, Ralph Lauren and Rebecca Minkoff. They are looking to catch the eyes of the fashionistas along with the minds of the tech gurus.

Other companies have also decided to put style on equal footing with technology. In the coming year, we will likely see the design of smartwatches and other wearable gadgets look very similar to non-tech, fashion counterparts. Let’s take a look at the most chic tech available now and in the coming months. Click through for fashionable trends you’ll be seeing in wearable tech in 2015. The original Google Glass seemed a bit conspicuous for many users. And once people began to recognize the design, they became leery of the technology and the person using it. But times have changed and are still changing. After collaborating with Google on a few more fashionable and perhaps less obvious styles, Diane Von Furstenberg now offers her DVF Made for Google Glass Eyewear on the Google Glass site. According to Engadget, Google Glass also offers a sporty new Titanium collection. 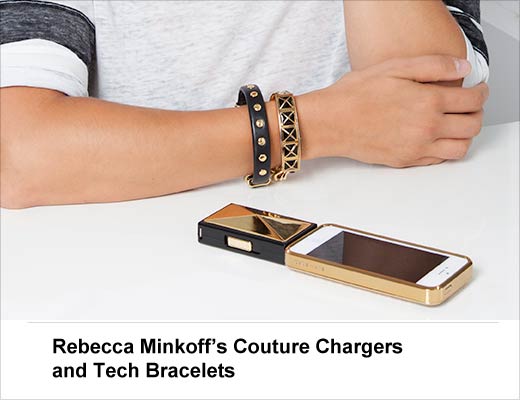 You can currently purchase the chic Stud iPhone Charger and the Studded iPhone Charger from her website, but Rebecca Minkoff and Case-Mate’s collaboratively designed tech bracelets might be worth the wait. Reported to be available as of Spring ’15 Fashion Week, the chain-link bracelet links to your smartphone via Bluetooth and can discreetly “alert you of calls and texts from your chosen contacts.” The lightning cable bracelet allows the user to sync and charge a smartphone without drawing attention to the geeky cords and wires. The bonus to all of these products — even divas won’t mind being seen using technology on the go. Though a select number of analysts have gotten to review this product, it’s still not officially for sale yet. Intel’s collaboration with Opening Ceremony has produced a stylish bangle with a small touchscreen called MICA (which is short for My Intelligent Communications Accessory). It touts 18K gold coated finish, sapphire glass touchscreen, snakeskin, pearls and lapis stones. The bracelet seems marketed to women, though men could sport the bangle too, and claims to offer discreet “on wrist messaging, calendar and event vibration-based notifications.” The Intel site provides a Buy Now link that takes you to a pre-order event page, but sources say MICA will be available before Christmas. First seen at the 2014 U.S. Open, the Polo Tech Shirt is a product of the collaboration between OMSignal and Ralph Lauren. Tennis Pro Marcos Giron and the ball boys for the tournament wore the shirt at the Open as part of the introduction to a more fashionable, less restrictive wearable technology. According to the Ralph Lauren site, the Polo Tech Shirt will be available in 2015 and promises to track and stream “real-time biometric data directly to your smartphone or tablet.” Part bling, part tech, Ringly is quite an attractive creation. Featuring 18K gold and semi-precious stones, it’s a discreet device that buzzes to alert the wearer to an important message from a contact via a smartphone app to which it is linked. Though it’s a bit chunky, it’s still far less noticeable than checking your smartphone constantly for that one imperative notification. The rings will go on sale early in 2015 and will come in sizes 6, 7 and 8.