Apple/IBM vs. Google vs. Microsoft: Who Wins the Battle for the 2020 Desktop?

A decade ago, if I’d even suggested that Microsoft would have been at risk from an Apple/IBM partnership and a dot-com company, folks would have laughed me out of the room. Back then, Microsoft had better than 95 percent of the desktop, the browser market, and was dominant in email, as well. Things have sure changed in the last decade. With ever more capable mobile devices, both Apple and Google can argue that they have a bigger personal technology footprint, even in the enterprise. And while Windows remains dominant on PCs, we just had several years when a large number of folks argued that the PC was effectively dead.

Fortunately for both Intel and Microsoft, the PC has resurged this year, and Google has proven to have the attention span of a four-year-old after eating several pounds of Halloween candy. Its Chrome platform has turned out to be little more than an annoyance, except in K-12 education. Steve Jobs is gone but Tim Cook should be better at enterprise kinds of efforts and is likely to do better partnering with IBM too (Jobs hated everything about IBM), suggesting that the Apple/IBM partnership could result in a real threat.

Taking Google off the table for the moment, let’s focus on Microsoft vs. Apple/IBM.

Microsoft’s strongest weapons in this fight are Windows 10, Office and Active Directory. It has effectively lost the browser, but only Google is challenging it there. Windows 10 is turning out to be an impressive effort. It seems to embody the few really good parts of Windows 8 and brings back the things users liked about Windows 7 and XP, in a vastly more secure and easier to use platform.

Microsoft still has a dominant position with Office, which should better embrace Windows 10 than it did Windows 8. Active Directory is still tightly tied into the enterprise and Windows, and the company just announced an app store for the enterprise. With Azure and Office 365, it has shown strong cloud competence, and I expect even more improvements in the coming months, given Satya Nadella’s background, in cloud hosted offerings.

The new app store offering is the most impressive right now, as it will allow IT to buy in bulk but still use Active Directory to allocate products to each employee with a very high degree of accuracy and automation.

Microsoft is stepping up this year, however, XP migrations are still pretty ugly, with much of the migration benefits only coming in after Windows Vista or Windows 7, suggesting that Windows XP users remain the most vulnerable. Fortunately for Microsoft, they also tend to be the most frugal and will have significant issues with Apple’s pricing.

The big problem for both of these firms is that neither is able to significantly take the lead in the combined effort and their past partnerships have failed so they don’t have great history together. On the other hand, Apple is still the company to beat with mobile, and Apple PCs have become more acceptable to business over the last decade. Apple has improved its Active Directory capabilities over the years, and IBM clearly knows how to work with it, but those efforts should pale in the face of the firm that owns the offering. 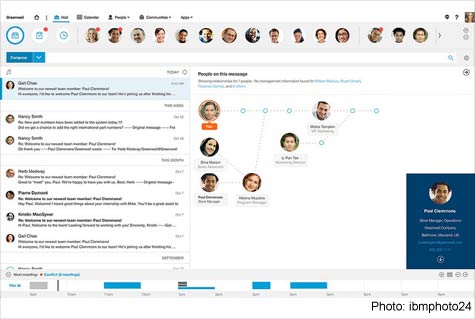 The big play may be IBM Verse, an email service that IBM just launched that poses a credible threat to Exchange and, through Exchange, creates a threat to Active Directory. It is basically a rethinking of how you’d do email if you were to take into account current thinking with regard to collaboration and layered on analytics to both monitor and motivate the related efforts. Now, Verse has three problems: There is no indication Apple will embrace it, it is really different and users aren’t fans of different even if it is better, and it is largely new and untested at scale. Email is something that has a lot of risk. There aren’t a lot of CIOs who have the will to mess with it. However, Verse is an impressive product and IBM is historically really good at both driving change and creating customer advocates in early adopters. If it were anyone else, I’d say they had a snowball’s chance in hell of getting this to critical mass, but IBM has done this a number of times in its over-a-century existence.

Wrapping Up: Who Wins?

If this were last decade and Steve Ballmer were still running Microsoft, it’d be hard to call this fight. Yes, Microsoft is the entrenched vendor, but both Apple and Google rolled over it without much trouble. However, a new CEO is running Microsoft and Nadella has shown that he can both motivate and focus the troops. This means this is Microsoft’s battle to lose. Both Apple and IBM will have to cooperate and execute at their very best individually, and work together as if they were one company, at least with regard to their enterprise efforts, in order to get significant market share gains. If Apple can embrace Verse, and IBM can get it to work as advertised, and both can deliver a desktop solution (including productivity) that works as well as Windows 10, they have a stronger shot at significant desktop gains than they’ve ever had before.  But they are going up against a Microsoft that increasingly looks like Bill Gates’ Microsoft and I don’t envy them this fight.

Of course, while this is all going on, Google with Chromebooks could decide to really resource its effort and Amazon is clearly thinking it is time to roll out its own thin client-based offerings around NVIDIA Grid. Either of these firms could fund an offering that could surprise all of these vendors but, at least for now, I don’t think that is likely in the near term.

I think the odds favor Microsoft winning the 2020 desktop, but it’ll be a battle that will make the 1990s seem amazingly easy by comparison. And if Microsoft stumbles or underfunds, it could find the desktop, email and productivity markets suddenly looking a lot like the browser market, one they once dominated.