To a certain degree, data formats are the bane of IT’s existence. Not only are there so many of them, but with the rise of Big Data, it’s starting to look like there soon will be many more. Of course, it’s the job of IT to stitch all these data formats together within applications to create something that is greater than the sum of its parts.

To help IT organizations unify all those data formats into a single more accessible platform, 28msec recently unveiled 28.io, an information processing platform that not only extracts, transform and loads (ETL) any set of structured SQL or unstructured NoSQL data in real time, it provides support for the open JSONiq query language specification to make all that unified data readily accessible.

According to 28msec CEO Eric Kish, the combination of JSONiq and 28.io allows developers to extend the capabilities of SQL to take advantage of the inherent parallelization potential of processors that consist of multiple cores. Kish says the end result is a real-time data management platform that allows developers to work with massive amounts of Big Data using a simple declarative language.

Originally based on the Zorba platform developed at the University of Zurich that runs in memory, 28.io is built on top of an open source XQuery processor language. The platform itself can either be deployed on premise or delivered via the cloud as a service. 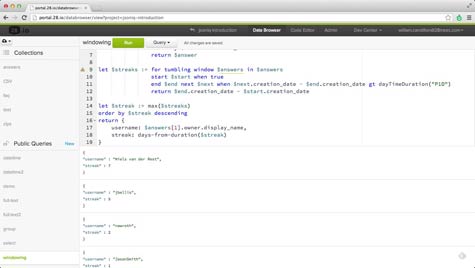 Some of the greatest untapped potential IT resources are multicore processors that, in theory, should be able to process massive amounts of data in parallel. Most existing applications, however, were not designed to take advantage of those capabilities. But as enterprise computing continues to evolve it’s clear that not only are new engines going to be required to process massive amounts of Big Data, but that we have the means to actually work with all that data in real time. And once you combine Big Data with real-time processing the IT possibilities should become almost endless.