The amount of "technical debt," otherwise known as issues that have to be addressed after an application has been deployed in production, on average is over $1 million for each business application.

That’s the finding of new research released today by CAST Software, a provider of software analysis and measurement tools.

According to Bill Curtis, chief scientist for the CAST Research Labs and director of the Consortium for IT Software Quality that was created by the Software Engineering Institute and the Object Management Group, applications built using C/C++ code tend to have the most technical debt, while COBOL applications had the least.

Finally, the study finds that when it comes to building applications that are easy to change, the government sector ranks worst. And government agencies are also much more likely to outsource the building of those applications, which leads Curtis to wonder why government applications built by professional services firms are so rigid. But when you take a closer look, COBOL leads by far. These scores are shifting higher. While Oracle 4GL apps are a little less robust. 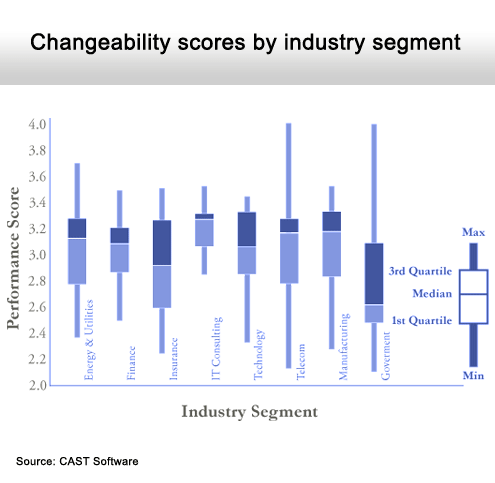 Government and Telecom have some of the lower scores. Governments make more use of outsourcing. Despite myths to the contrary, there is no correlation. COBOL is most complex, by far. C/C++ applications have the most unaddressed issues.