Apple is currently winning the battle for the hearts and minds of developers of mobile computing applications, but the prospects of the Google Android operating system continue to be bright.

Those are the major findings of a survey of 2,363 developers that was conducted by IDC on behalf of Appcelerator, a provider of development tools for building applications on mobile computing devices.

With the growing popularity of the Apple iPad, Apple has extended its financial appeal to developers that typically like to develop applications on platforms they know there is a market for. But the market has also seen a raft of new Google Android tablet systems come to market, and many developers are now committed to developing for both the Apple and Google mobile computing platforms.

The end result is that the Android tablet market is now ready for lift off, says Scott Schwartzhoff, vice president of marketing for Appcelerator.

According to Schwartzhoff, the majority of developers are committed to building native application on these platforms, as opposed to relying on Web applications to address this rapidly growing market.

Schwartzhoff says that the survey results also show that while Apple has an edge over Google in the near term, Google is also building a major new developer following in the embedded device space where the Google Android platform, for example, is seen as a preferred platform for building Web TV applications.

That means that while Apple may dominate the mobile applications space for a while to come, Google appears poised to dominate the emergence of a new class of embedded systems that will leverage the Internet to run any number of new applications.

And if that’s the case, while Microsoft may still own the PC desktop, Google might wind up running everything else. Click through for results from a mobile development survey conducted by Appcelerator and IDC. 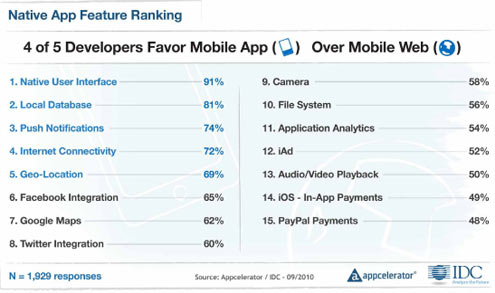 Developers are betting on both Apple and Google. 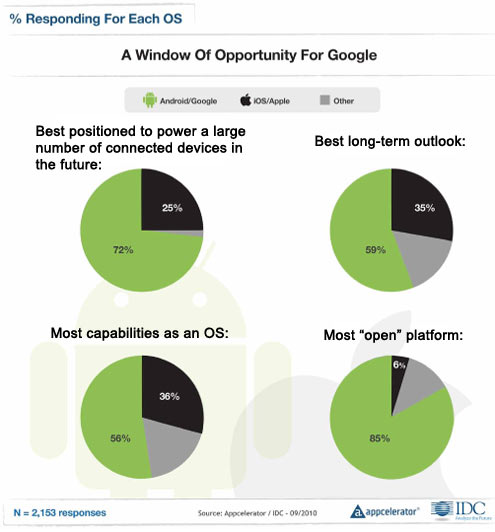 Google has the stronger long-term position. 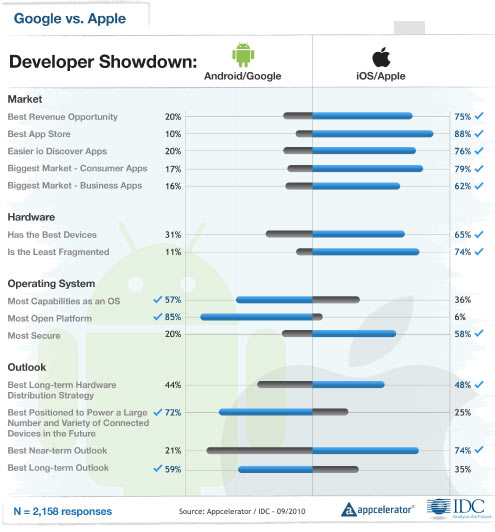 Apple dominates in the short term.