The exponential growth of cloud computing has raised concerns about how rapidly enterprises are adopting cloud technologies while ignoring or struggling to monitor and control the associated expenses. As organizations evolve and grow, employees turn to hundreds of cloud computing services without expressed permission from the enterprise. The combination of various business units deploying cloud technology separately from other departments and the misconception that it’s not necessary to involve an enterprise’s IT department in the cloud application adoption process has resulted in misallocated expenses, lost efficiency and poor policy enforcement for enterprises.

A recent eye-opening survey indicated that the average enterprise uses more than 450 cloud apps, and this figure proved to be nine to 10 times greater than the average corporate IT team estimated. Another survey revealed that 30 percent of software-as-a-service (SaaS) apps were being used outside of IT’s sphere of control. These results paint a startling image of a chaotic cloud atmosphere, where employees in need of solutions fail to adhere to IT policies or, in many cases, are acting in absence of an IT policy.

Without visibility into the wide variety of cloud apps employees are using every day, organizations face an array of problems– such as potential liabilities, security issues and hidden costs. In this slideshow, Tangoe describes five ways that enterprises can take back control of the cloud chaos. Getting a Handle on Cloud Chaos

Click through for five tips organizations can use to get control of cloud resources, as identified by Russ Loignon, vice president of cloud consulting, Tangoe It may seem simple, but the first step an organization should take is to understand which apps its employees are actually using. Individual employees often use cloud apps outside of IT’s control, and business units purchase apps without alerting the organization as a whole. It’s necessary to get a handle on which apps are being used across the entire organization. 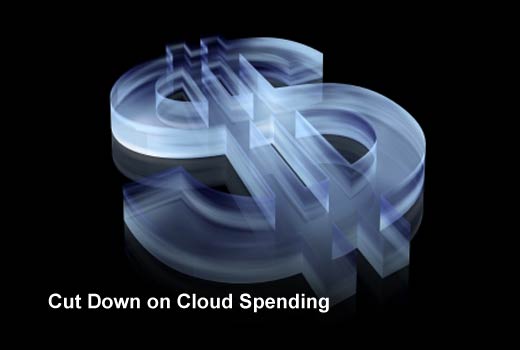 Cut Down on Cloud Spending

While many organizations initially turn to the cloud for the cost savings it can enable, they often end up wasting huge amounts of money on unused cloud app licenses and outdated contracts with cloud providers. Think of all the licenses held by employees that have left the company, and all the cloud contracts that haven’t been re-negotiated in years – all of that adds up to wasted resources. It’s also important to take the extra step and double-check the accuracy of charges from cloud providers to avoid spending unnecessary money. The organization should negotiate current cloud contracts to make sure it’s getting the best deal, and make sure to re-negotiate these contracts in the future. In doing so, it’s important to ensure that rates are in accordance with purchase volumes. Once the organization understands which apps employees are using and where money is being spent, it should create a central portal from which this can all be managed. Central management of cloud assets and expenses will significantly reduce the complexity of managing cloud contracts, and help to eliminate duplicate contracts. If the process of managing cloud apps today, and on an ongoing basis, seems like a lot of work, the organization should consider turning to a third-party provider that can provide an objective assessment of cloud usage. This oversight can help the organization realize the best possible value from its cloud investment.

Previous articleGovernance Trends and Best Practices from ARMA Live! 2014
Next articleA Big Picture View of the Move Toward Broadband Regulation