Microsoft Aligns with Alteryx for Analytics

In a move that enhances the analytic horsepower that users of Microsoft applications can access, Microsoft and Alteryx today announced they have formed a strategic partnership.

Under terms of the deal, users of Microsoft PowerBI applications can now invoke Alteryx analytics applications directly from within the Microsoft business intelligence application. In addition, the companies have committed to developing deeper integration among Alteryx Analytics and Microsoft SQL Server, Microsoft Azure and the Cortana Analytics Suite.

Alteryx president and COO George Mathew says the two companies envision creating an analytics ecosystem spanning Microsoft and Alteryx software running inside and outside of the cloud. Ultimately, Mathew says organizations will be able to federate the running of analytics applications across hybrid clouds. For example, the software-as-a-service (SaaS) instance of Alteryx analytics software is hosted on Amazon Web Services. Eventually, that offering will be able to exchange data with instances of Alteryx software running on Microsoft Azure and on premise.

A big part of that integration effort, adds Mathew, will be the ability to blend data in memory within an Alteryx analytics application. For example, Alteryx can already import and export data in native Microsoft Office file formats which, along with data from Microsoft SQL server, can be blended in memory within the Alteryx analytics application. 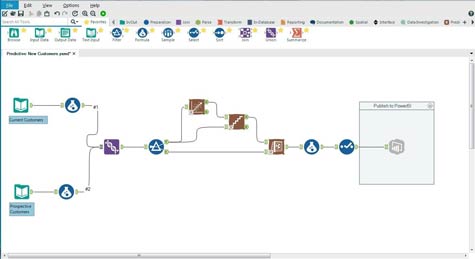 Mathew notes that Microsoft is picking up a lot of momentum thanks to its investment in cloud applications and services. Longer term, Mathew says Alteryx expects to be able to integrate its software with HDInsight, an instance of Hadoop, and Microsoft machine learning software running on Azure.

Whether it’s on premise or in the cloud, Microsoft applications generate massive amounts of data across the enterprise. The challenge is to make sense of it all in a way that advances the goals of the organizations that generate all that data.