A Techie at the Detroit North American International Auto Show I couldn’t help it – when I visited the North American International Auto Show in Detroit a couple of days ago, I was distracted by the technology used by the car makers to present their automotive showpieces. At the end of the day, when I met up with the other half of my group, having been separated in the crowds along the way, I realized that I’d been taking pictures of everything but the cars. Here’s a sampling of what caught my eye.

IPads rule at the NAIAS. Presenters carry them around in order to answer visitors’ questions more fully, display stands are topped with them, benches have a couple of them wired to the side for those taking a short rest, Volvo popped them around its comfy, futuristic web seating pods, and the Audi Q7 has two of them mounted in the back seat. Ford has been using the blue oval cards at the NAIAS for a few years. Visitors can get a free card, which they then tap at any of the numerous information stations in the enormous Ford display, collecting information on the pertinent vehicles with each touch, and simultaneously registering for prizes and other goodies. After the show, they can use the cards to get more information, as well. Surprisingly, no other vendors have begun using this method to send information home with interested visitors. Lines to get into more experiential displays, like the one for the Volkswagen Cabriolet, were as long as the lines to get into the cars themselves. This one scores for its cute factor, which matches nicely with the car. 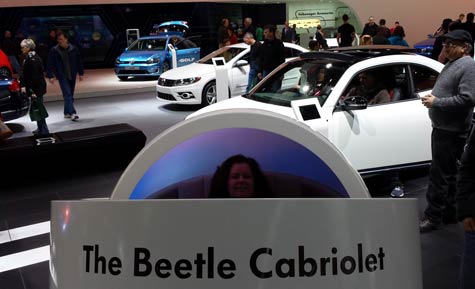 Driveline and chassis technology maker ZF turned a display that could have otherwise paled next to all the flashy models and concept cars into a game show. A big screen pulled in passers-by and good fun was had by all. Automotive parts supplier Denso let visitors do what they were all thinking about: drive. Again, a display that might have otherwise struggled next to the big carmakers was a significant draw. At this year’s show, Bentley was the only vendor with its cars completely roped off from the visitors – no touchy-touchy. But the brand’s classy image was tarnished, in my opinion, by the Twitter hashtag plates hanging from the front bumpers. On a $300,000 hand-made car. #tacky

No QR, no Wearables