Top 10 Gifts for Executives On the Go

Buying a gift this holiday season for a friend or loved one who travels frequently due to work? Or perhaps it’s for a supervisor or boss who shuttles between offices? The following is a list of 10 gift suggestions that Paul Mah put together for the traveling executive. Click through for 10 gifts perfect for the traveling executive, as identified by Paul Mah. The Altec Lansing inMotion Air wireless speaker delivers high-quality music playback in a portable package ideal for both the meeting room and hotel room. Its built-in rechargeable battery is good for up to seven hours of playing time, while a wireless streaming capability means that you can easily pair it with Bluetooth-capable devices such as an iPod and just about any modern smartphone. Non-Bluetooth devices are also supported via an AUX jack, or using the bundled USB wireless adapter for plug-and-play use with a laptop. Though there are many manufacturers of third-party laptop chargers around, Paul’s personal opinion is that Kensington makes one of the best laptop chargers in terms of slimness and power handling. The new AbsolutePower charger takes the company’s previous generation of laptop chargers one step further with its triple-charging capability. What this translates into is a total of two USB ports for simultaneously charging a smartphone and tablet device (up to 10 watts power) on top of the laptop. Moreover, the new scratch-resistant finish looks fantastic, too. When it comes to physically securing a laptop, there is probably no better brand than Kensington, the company that invented the Kensington lock found in most laptops. The ClickSafe keyed laptop lock was designed with convenience in mind, and incorporates the newer ClickSafe mechanism for single-click securing of laptops. The kit includes the requisite adapter to convert the standard Kensington slot into the ClickSafe anchor. 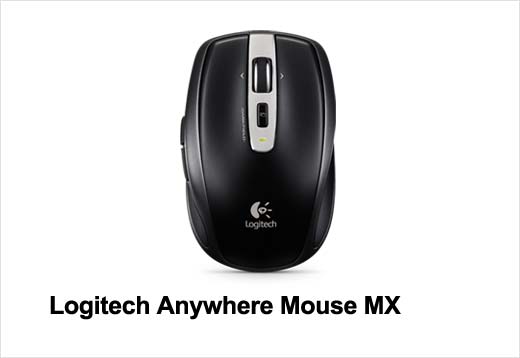 Paul has been using his Logitech Anywhere Mouse MX for over a year now, and has found its Darkfield laser tracking technology to be superior to those of competitors. Together with its sleek ergonomic design, integrated thumb buttons and Logitech’s trademark hyper-fast scrolling, the Anywhere Mouse MX ranks — in his opinion — as one of the top computer mice available today. Moreover, the bundled “Logitech Unifying” USB wireless receiver ensures robust connectivity and can be paired to work with compatible devices. Having established a name for waterproof cases, OtterBox has in the last few years embarked upon a journey to create a comprehensive range of protective gear for most of the popular smartphones, tablets and e-reader devices out there. Well, Paul absolutely loves the quality, clean design and protection afforded by his Reflex Series iPhone 4 case. Other categories of cases are available, too, such as the Defender Series for the greatest protection, Commuter Series for style and the Impact Series silicone sleeves. The Pepwave Surf On-The-Go (OTG) is really a sort of Swiss Army Knife for mobile Internet access. The device sports multiple distinct operation modes that will serve the traveling executive when on the move as well as back in the office. The OTG works as a Wi-Fi router when connected to a USB 3G/4G modem or an Ethernet cable/DSL modem. When connected to a Wi-Fi hotspot (or hotel Wi-Fi), the OTG is also capable of sharing the Wi-Fi connectivity with additional Wi-Fi devices. The Pepwave Surf On-The-Go can be purchased here. The GoFlex Satellite Mobile Wireless Storage is a battery-powered wireless external storage drive that gives users the ability to access its massive on-board 500GB of storage with their favorite tablet or smartphone. Either using the free iOS App or from a Web browser, video can be streamed using Wi-Fi to three iPad tablets simultaneously. Fully charged, the GoFlex Satellite provides up to five hours of operation, or 25 hours on standby. On wired, the GoFlex Satellite Mobile Wireless Storage operates as a portable USB 3.0 disk drive. Looking for the ultimate protective case for your laptop? The T.A.C-1 (Tactically Advanced Composites) case is a hard shell case made from real carbon fiber that its maker claims meet (and exceed) MIL-STD 810 requirements. The incredibly strong casing incorporates a water-resistant zipper and is also TSA checkpoint-friendly. At the moment, the T.A.C-1 case is available for the MacBook Air, iPad and Sony Vaio VPC-Z1 and VPC-Z2, as well as for 13-inch, 15-inch and 17-inch laptops. The iPad Travel Express is a snug fit for an iPad tablet and Apple wireless keyboard for those who need to work on the go. A rigid plastic insert helps keep the display screen intact while internal scratch-free pockets help protect (and hold) various other accessories. Produced directly in the United States by San Francisco firm Waterfield Designs, Paul has found the build quality of his iPad Travel Express (and other products from the company for that matter) to be extraordinarily well done. The ZAGGkeys SOLO is a portable Bluetooth wireless keyboard with a built-in stand that is suited for a number of tablets and smartphones. This includes the Apple iPad, iPhone, iPod Touch, Galaxy Tabs and various other Android tablets and smartphones (specific compatibility information is available on the product website). Though the keyboard is slightly smaller than a full-sized keyboard, ZAGG claims its “island” (aka Chiclet) styled keys allows for maximum typing room.

Previous articleBeware: Twelve More Holiday Scams to Avoid
Next articleTop Predictions for IT Organizations and Users for 2012 and Beyond