Last year, 2.4 billion people used the cloud for accessing email, social media, games, backup storage and apps. With this figure projected to reach 3.6 billion by 2018, it would appear that cloud computing is here to stay due to our need to store and access ever expanding amounts of data. But the cloud is just the beginning with exciting data storage developments on the horizon.

This slideshow, provided by Ebuyer, depicts how far data storage has evolved since the IBM punch card in 1928 and further analyzes the future of this innovative industry. Datastickies, DNA storage and helium drives are just some of the possibilities for the future of data storage. The Future of Data Storage

Click through for a review of how storage has developed to this point and a closer look at where it’s headed in the future, as identified by Ebuyer.com.

Storing important documents on your local PC has been common practice for years. We’ve seen the technology change drastically in a very short amount of time, and a lot of exciting innovations are on the way. Check out how far we’ve come since IBM first introduced the 960 bit punch card in 1928. What will the future hold? One possibility is datastickies. Imagine storing your data on a set of sticky notes. The technology intends to replace USB-flash storage by offering something that is cheaper, more convenient and user-friendly.

Datastickies store data from 4 GB to 32 GB on a sliver of graphene between two protective layers. Graphene is a ground-breaking new material that is comprised of tightly packed carbon atoms in a two dimensional honeycomb lattice. It has a minimum thickness of just one atom.

Monitors will need to have a special surface that can interact with the datastickies. Simply stick the post-it note device to an area of the monitor and access the data. What started off as a joke turned into reality when two genomicists discussed how appropriate storing data on DNA could be.

Data files are converted into binary code and then into A, T, G, and C code, which stand for the four DNA bases. From these letters, blueprints for the DNA are drawn and the actual strands are created. To the human eye, the completed DNA fragments look like a tiny amount of dust at the bottom of a test tube.

Why is this a step forward? Well, data stored on DNA could be kept intact for thousands of years. Compare this to magnetic tape, which needs to be replaced every five years, and you can see the advantage. In 2013, HGST created the first 6 TB 3.5-inch hard drive; apparently, this was made possible by sealing helium gas inside the device.

Helium has one-seventh the density of air, so it dramatically reduces the friction between the spinning disks in the device. As a result, it lowers the electrical power the hard drive consumes and allows more disks to be packed closer together, hence increasing the capacity. Seagate claims that Shingled Magnetic Recording (SMR) technology is the first step to reaching a 20 TB hard drive by 2020. SMR involves packing a disk’s tracks closer together; overlapping the tracks allows more data to be written on the same amount of space.

However, despite their larger capacity, SMR drivers suffer from slow data rewrites. As a result of the tracks overlapping, any data that’s already on the track has to be picked up and sequentially rewritten at a later point. Researchers at IBM are working on a new technology that they like to call “the cloud-of-clouds.” They claim to have developed a service that allows you to move data between multiple cloud platforms in real time.

The multi-cloud distribution storage system links public and private cloud services and is intended to help avoid service outages from the separate providers. 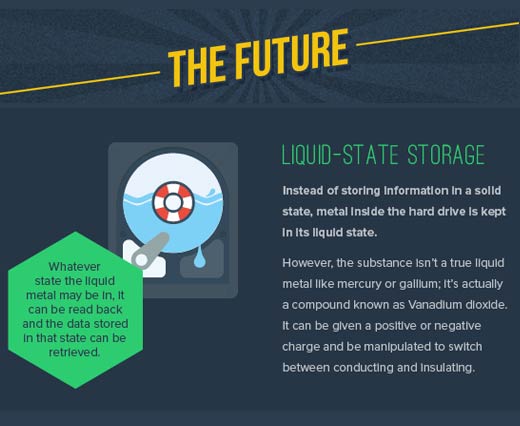 Instead of storing information in a solid state, metal inside the hard drive is kept in its liquid state. However, the substance isn’t a true liquid metal like mercury or gallium; it’s actually a compound known as vanadium dioxide. It can be given a positive or negative charge and be manipulated to switch between conducting and insulating. 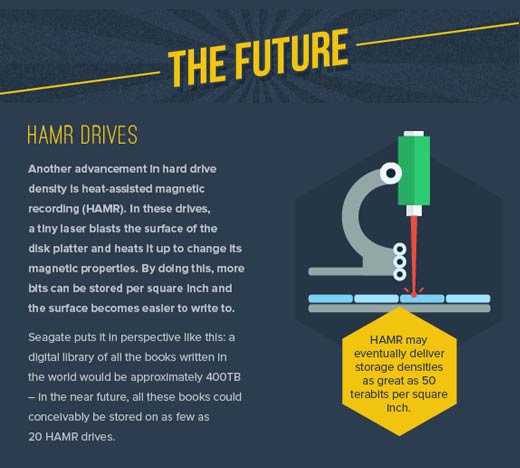 Another advancement in hard drive density is heat-assisted magnetic recording (HAMR). In these drives, a tiny laser blasts the surface of the disk platter and heats it up to change its magnetic properties. By doing this, more bits can be stored per square inch and the surface becomes easier to write to.

Seagate puts it in perspective like this: A digital library of all the books written in the world would be approximately 400 TB – in the near future, all these books could conceivably be stored on as few as 20 HAMR devices. 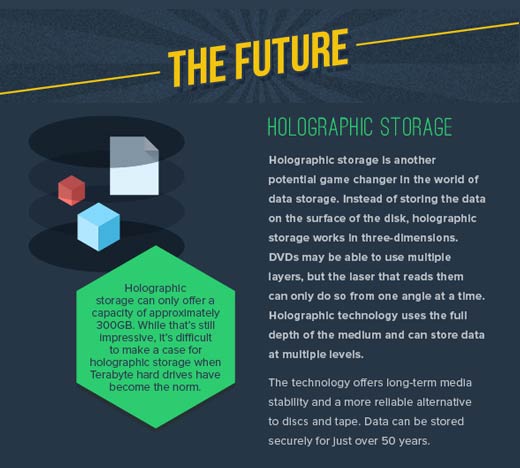 Holographic storage is another potential game changer in the world of data storage. Instead of storing the data on the surface of the disk, holographic storage works in three dimensions. DVDs may be able to use multiple layers, but the laser that reads them can only do so from one angle at a time. Holographic technology uses the full depth of the medium and can store data at multiple levels.

The technology offers long-term media stability and a more reliable alternative to discs and tape. Data can be stored securely for just over 50 years. Surely cassette tapes have had their day? Not according to Sony. The company has recently developed a new magnetic cassette tape that can hold 148 GB per square inch of tape. The new technique uses a type of vacuum-forming called sputter deposition; argon ions are shot at the polymer film to create a layer of fine magnetic crystals with an average size of 7.7 nanometers. However, the re-birth of cassettes isn’t intended to replace Blu-rays and CDs. The tapes are developed for long-term storage of industrial-sized data.