As multiple clouds become the new IT normal, software vendors are starting to make their offerings available via multiple cloud service providers. At the Gartner Data and Analytics conference this week, Teradata joined those ranks by announcing it will extend the managed services it provides around its software to both the Amazon Web Services (AWS) and Microsoft Azure pubic clouds.

At the same time, Teradata announced that it has created an open source Kylo project through which it will make data lake management software that spans Apache Hadoop, Apache Spark and Apache NiFi available for free. The core Kylo code is based on software Teradata gained when it acquired Think Big Analytics in 2014.

Brian Wood, director of cloud marketing for Teradata, says that for now, Teradata is going to limit its Teradata IntelliCloud services to AWS, Azure and the instances of Teradata IntelliCloud it already hosts on VMware platforms. While interest in public clouds is high, Wood says it’s still early days in terms of customers mashing together application workloads across multiple clouds. For the time being at least, Wood says organizations are opting to deploy workloads on various public clouds that still run in isolation from one another. Those public clouds, however, are being viewed as a natural extension of on premises IT deployments, adds Wood. 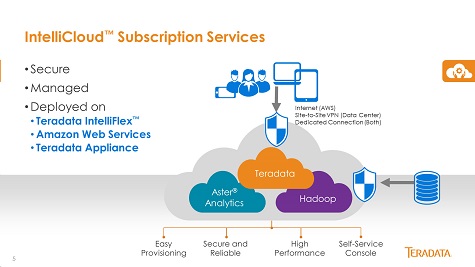 Obviously, there will come a time when hybrid cloud computing across multiple clouds will be more common than it is today. The issue many organizations will need to come to terms with in the meantime is to what degree they want to stand up and manage the software needed to access data wherever it happens to reside.

Previous articleMongoDB Looks to Accelerate Transition to the Cloud
Next articleIt’s Official: A Version of 5G Coming a Year Early