If your organization is thinking about storage, now may be the perfect time for you to give flash-based storage a look. For some time now, organizations that have needed the fastest possible access to data, such as trading floors, have turned to flash-based storage systems. Without a doubt, the performance advantages provided by flash far outpace those provided by other traditional methods of storage. Unfortunately, the cost of flash storage has, up to this point, been a major hurdle to wider adoption.

Today, however, the industry is beginning to change and the flash technology that once made sense only when extreme high performance was required is now a real possibility for general use in mid-sized to large companies. To help organizations determine if flash might be the right solution for their companies, Logicalis US has outlined six ways flash storage is changing the storage landscape.

“The storage market is going through a paradigm shift,” says Samad Ali, vice president and general manager, HP Solutions, Logicalis US. “At the June 2014 Discover conference, for example, one of our customers was briefed on the new HP 3PAR StoreServ 7450 solid-state disk array. He had been considering purchasing disk-based storage from HP, but the value proposition of the HP 7450 array was so compelling that he changed his mind on the spot, moving forward with an all solid-state array for his general-purpose applications. The HP 7450 all-flash array offers 99.9999 percent availability and carries a five-year warranty all at a price point near that of disk-based storage.” 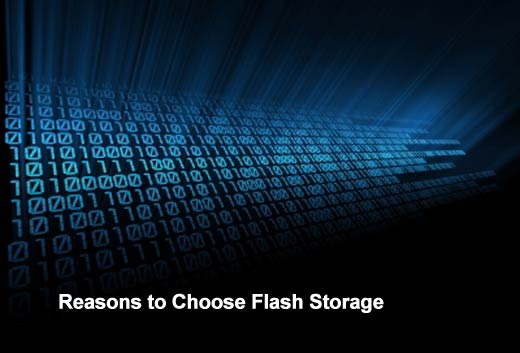 Click through for six reasons your organization may want to give flash storage a second look, now that it’s become more widely accessible, as identified by Logicalis. Reducing Strain on Your Infrastructure

From an IT perspective, moving a large processing workload to a flash-based system allows the remainder of the IT infrastructure to breathe again. Shifting the most significant I/O load to a small flash storage appliance allows the massive disk sub-systems to handle the remaining workload far more efficiently. Deployed in solid state drives (SSDs), flash storage systems can help businesses shrink their IT infrastructures; as few as 10 SSDs in some situations can deliver storage performance equivalent to several hundred hard disk drives (HDDs) reducing storage footprint, power consumption, and cooling needs. With no read/write heads to move around on an SSD, physical wear is no longer an issue, so delays caused by spinning disks and moving heads are eliminated. 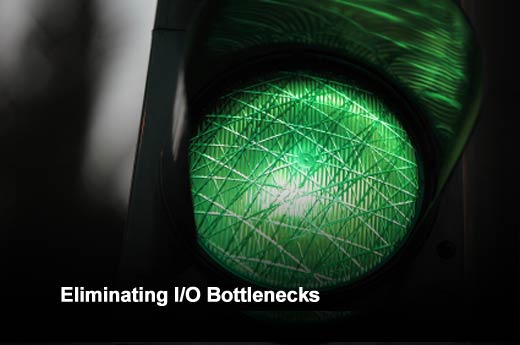 Eliminating I/O bottlenecks helps an infrastructure to run without much intervention by the IT staff, which means the time IT team members once devoted to making key applications run better on traditional storage no longer needs to be spent in that manner. When providing applications in the cloud, eliminating I/O bottlenecks means a faster and more consistent user experience with no latency, making flash a superior choice when applications are offered in the cloud. Companies that use SAP to run their entire organizations are another great example of what can happen when flash storage is used to eliminate I/O bottlenecks; every ERP function that SAP performs, and everything that’s tied to SAP such as Oracle databases, runs significantly faster with flash-based storage. Because traditional spinning drives are relatively slow compared to processors and networks, over the years, the industry has come up with techniques to overcome that limitation. In a workaround known as “short stroking,” only a fraction of a storage system’s spinning drives are actually used to hold data while the rest sit idle. As a result, the heads don’t have to move very far to access the data, and the underutilized drives operate more efficiently, all of which improves performance. Perhaps not surprisingly, short stroking comes with a steep cost premium, because more capacity is purchased than is actually ever used, and flash-based storage eliminates the need for short stroking altogether, improving ROI for customers previously using this workaround dramatically. Getting You Better Bang for Your IT Buck

Over the past five years, a continued price decline in solid state storage (SSS) and solid state drives (SSDs) was accompanied by an increase in capacity, making flash storage suitable for an array of business applications. It’s important to note that price-per-IOPS (input/output operations per second) may be a better metric to use than price-per-gbyte when comparing flash to hard disk drives. Based on business’ need for speed, in the not-too-distant future, as flash storage continues to evolve, experts expect IT infrastructures will be built completely around flash: In what some have referred to as a “flash or trash” strategy to drive down further cost, mission-critical, high-performance data will reside on flash-based systems, while everything else goes to serial ATA (SATA) drives. Data center transformation is being driven in part by the new ways companies are using their data. This trend coincides with the further emergence of Big Data, along with improved analytics capabilities that allow companies to extract value from data sets that had not previously been “mineable” for that information. Flash-based storage systems can accelerate the analytical process, allowing companies to extract that information more quickly than ever before. Gaining access to information sooner makes the information far more valuable, and deploying new analytics tools such as these can give companies a competitive advantage.