Over the years, storage administrators that can correctly allocate the right amount of resources to ensure specific levels of application performance are maintained have been worth their weight in gold. But as machine learning algorithms evolve, the intelligence required to maintain those levels of performance can now be more precisely applied via software.

Primary Data this week made available an update to its DataSphere software that now adds the ability to move data to an optimal location in addition to employing metadata to ensure that the right applications are given priority when accessing the fastest storage resources available.

Company CEO Lance Smith says with DataSphere 2.0, it’s now possible to move data to better prioritize access within the context of a set of policies defined by the IT organization. Those policies, adds Smith, can also be defined in a way that prevents data or groups of files from being moved in compliance with any data sovereignty requirement that might have been imposed by a local government or regulatory agency.

In addition, Smith notes IT organizations are now employing DataSphere to identify data that is not being accessed as it once might have been. That creates the opportunity to then move that data off high-performance primary storage systems in favor of less expensive secondary storage systems or a public cloud.

“It can identify cold data as well as data that is in the process of cooling,” says Smith. 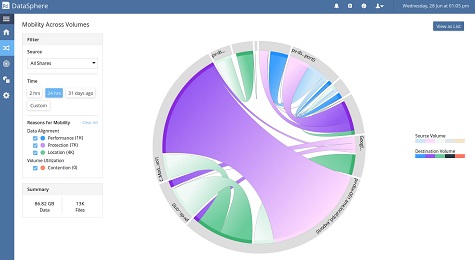 Fresh off raising another $20 million in funding, Primary Data is part of a general shift toward software-defined storage that is transforming how storage is deployed and managed. As that storage software is able to analyze the telemetry data generated by applications, the level of intelligence that can be applied starts to exponentially increase. That increased intelligence may not eliminate the need for storage administrators altogether, but it will most certainly alter the economics of storage at a time when most organizations are already choking on the volume of data that needs to be managed.