How Virtualization Exacerbates Backup and Recovery

With the advent of virtualization, there are more servers to be backed up than ever in the enterprise. For IT administrators charged with managing this process, the addition of all these virtual servers only serves to exacerbate an already complicated situation.

Phil Curran, director of marketing for CommVault, a provider of high-performance backup and recovery systems, says that this fundamental change to the application portfolio is putting a premium on the performance of the backup solutions. In many cases, IT organizations have deployed backup and recovery solutions that don’t meet the new requirements of an IT world that is increasingly becoming virtual.

In fact, a recent survey of 479 IT managers conducted by CommVault found that well over half the respondents had already deployed virtualization on well over half their servers. And more than half of them were trying to manage more than 50 instances of virtual machines. The survey also found that most IT organizations are already trying to cope with well over 1TB of data and that a surprisingly high percentage of IT organizations are already running mission-critical applications on virtual servers.

According to Curran, the high density of virtual servers results in a lot of competition for a limited amount of physical storage resources, which means more IT organizations will be reevaluating their backup and recovery strategies with an eye toward improving performance.

Unfortunately, there is frequently a disconnect between changes made on the server side of the data center and the downstream implications of those changes on storage requirements. As a result, it may be a little while before the impact of virtualization will be fully understood in the realm of storage, but there is no doubt that fundamental change to management of the backup and recovery process is on the way. Click through for results from a CommVault virtualization survey. Most IT organizations are well beyond the halfway mark. A little more than half have 50 or more. 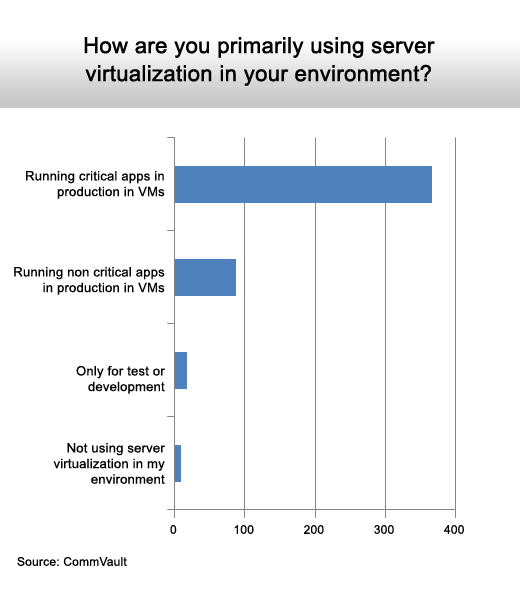 A lot of business-critical applications are running on virtual servers. 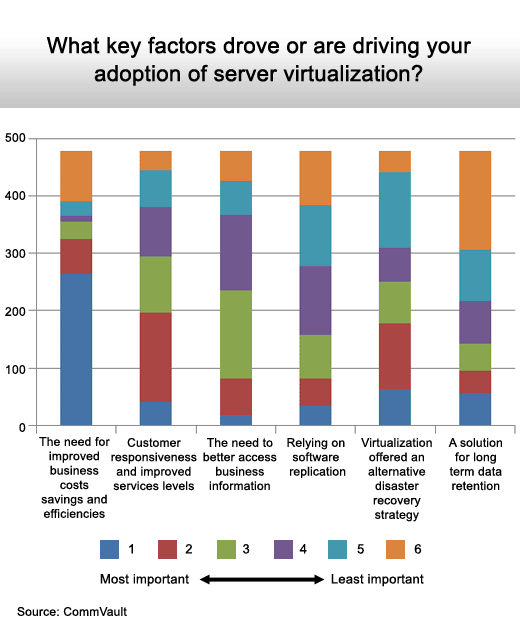