Virtualizing storage may not be a new idea, but turning multiple storage nodes into a programmable virtual disk promises to significantly change the way storage is managed inside the enterprise.

Hedvig, fresh from raising an additional $12.5 million in funding, aims to transform storage with the launch of its distributed storage platform that is protocol agnostic. Led by Hedvig CEO Avinash Lakshman, who previously was the lead developer for the Cassandra and Dynamo NoSQL databases, the fundamental idea driving the development of the Hedvig storage system is to reduce the complexity of managing storage by making it possible for the average IT administrator to do it.

Lakshman says Hedvig is currently beta testing software-defined storage software that can make multiple nodes of storage clusters appear to be one massive virtual disk. At the same time, Hedvig is developing application programming interfaces (APIs) through which IT administrators can programmatically manage the system using any number of tools. 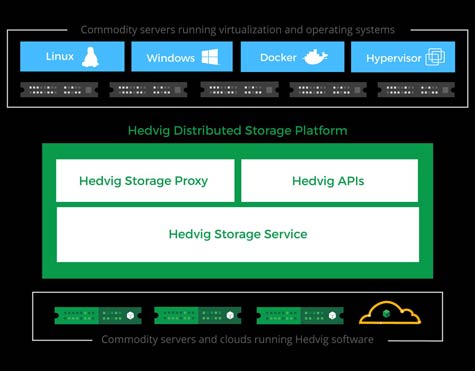 Lakshman says Hedvig is part of the general march toward software-defined data centers. The company is trying to fundamentally reduce both the capital and the operational expenses associated with managing enterprise storage.

It may take a little while longer for the Hedvig distributed storage platform to make it out of beta. But we can now see that software-defined storage has the potential to turn storage systems into a virtual commodity both inside and outside of the cloud.